Police: Driver tried to run over K-9 before car caught fire and couple broke into the mayor's house

The man and woman are facing several charges. 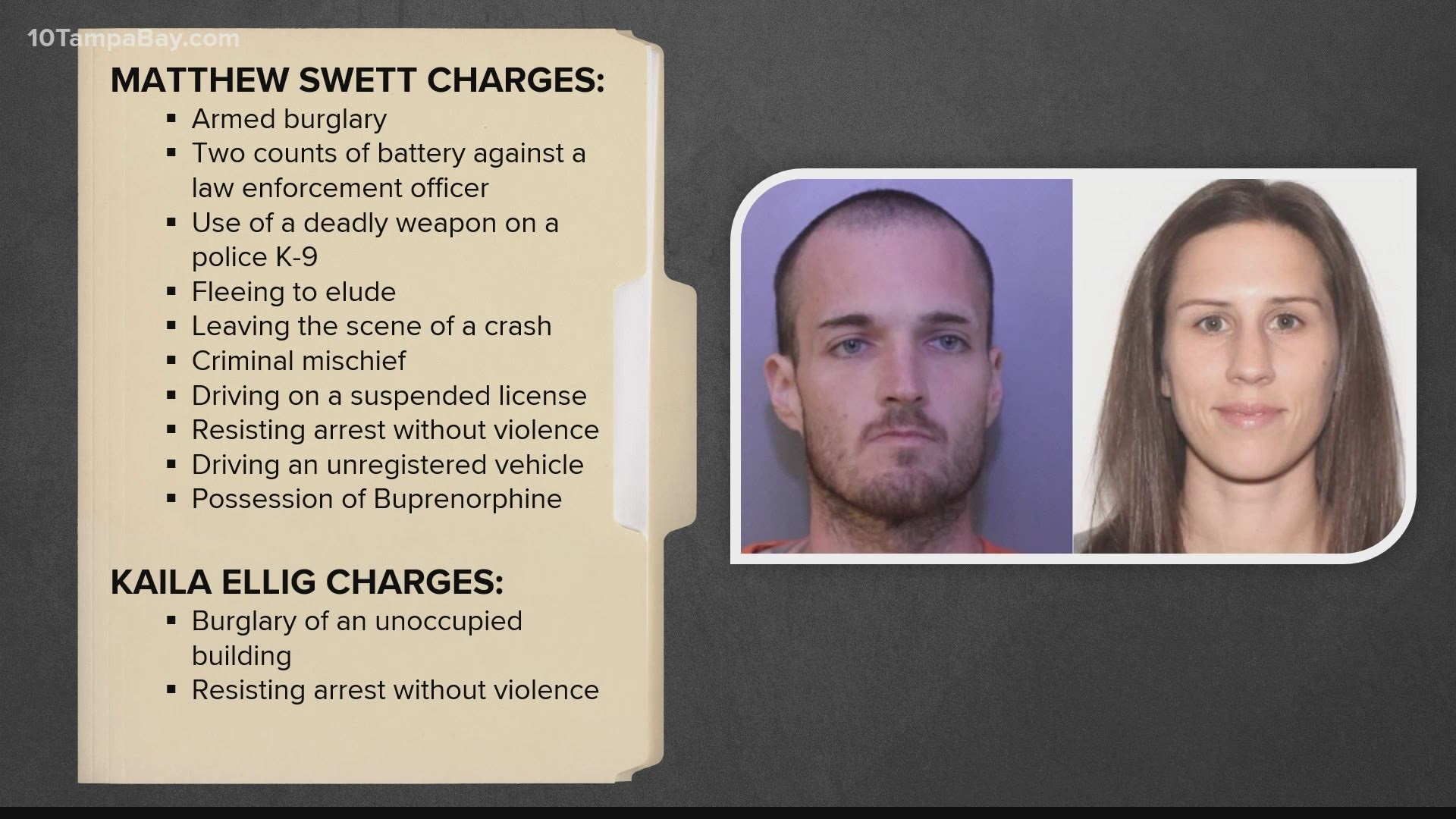 HAINES CITY, Fla. — A Florida couple was arrested after police say the man rammed an officer's cruiser, tried to run over a K-9 and handler, then broke into the home of the mayor of Haines City.

The ordeal began when Haines City Police Officer William Tucker was patrolling around 2 a.m. Monday and spotted a blue 2003 Toyota at a construction site. Investigators say 31-year-old Matthew Swett – of Intercession City – was there, spotted Officer Tucker's patrol car, jumped into that Toyota and drove directly at the police cruiser.

According to law enforcement, Swett intentionally hit Tucker's patrol car, damaging the front. Authorities say 32-year-old Kaila Ellig, of Davenport, was in the car with Swett.

Shortly thereafter, police say K-9 Officer Joseph Elam and his partner Cash found Swett's Toyota exiting onto Old Polk City Road. There was a short chase before the car ran into a ditch, and authorities say the couple jumped out.

"The commands were ignored and Swett put the vehicle in reverse and intentionally drove toward the two, striking Cash," a Haines City spokesperson wrote in an email. "Officer Elam, seeing what was about to happen, used the leash to pull Cash away from the accelerating vehicle into his arms, and ran, with Cash in his arms, to avoid being run over. Thanks to his quick action, K-9 Cash was not injured."

Police say Swett kept backing up and hit the front of Officer Elam's cruiser before speeding off and crashing near Prado Grande Avenue and Old Polk City Road. Officers say Swett and Ellig got out and ran into the woods, and the car caught fire.

Investigators say the couple hopped a fence and cut a hole in the back screened porch of Haines City Mayor Morris West's home in the Randa Ridge subdivision.

Responding officers say Swett refused to peacefully surrender and reached into his waistband while ignoring commands to come out with his hands up.

"Fearing a further escalation with occupants in the home, Officer Elam directed his partner Cash to apprehend Swett who was bitten on the leg, allowing the officers to physically secure him. Subsequent to the arrest, a large fixed blade knife was found in Swett's waistband," police explained in a news release. "Ellig cooperated and was arrested without further incident."

Swett was charged with armed burglary, two counts of battery on a law enforcement officer, use of a deadly weapon on a police K-9, fleeing
to elude, leaving the scene of a crash, criminal mischief, driving on a
suspended license, resisting arrest without violence, driving an unregistered
vehicle and possession of Buprenorphine.

Ellig was charged with burglary of an occupied structure and resisting arrest without violence.

"I am thankful we have such a professional Police Department who literally
work day and night to protect our city," Mayor West wrote in a statement. "Our officers and their county partners showed tenacious resolve to stay on the heels of these suspects and bring this to a peaceful conclusion."

First responders say Swett was taken to AdventHealth Heart of Florida, where he was treated for the K-9 bite. He was then taken to the Polk County Jail.

"Neither the vehicle nor the tag were registered to the suspects. Swett has not
had a valid driver's license since 2017," police explained.

Swett has a prior criminal history that includes robbery, burglary and drug charges. Ellig's record includes past charges of grand theft and fraud, in addition to drugs.

"This was fantastic police work by our officers and surrounding law
enforcement partners," Interim Haines City Police Chief Loyd Stewart wrote in a statement. "Because of their efforts, no one was seriously hurt and one very dangerous man and his accomplice are in jail."