“We don't want them to skirt issues throughout the American history...because they're fearful of how they might be interpreted," said Nancy Velardi. 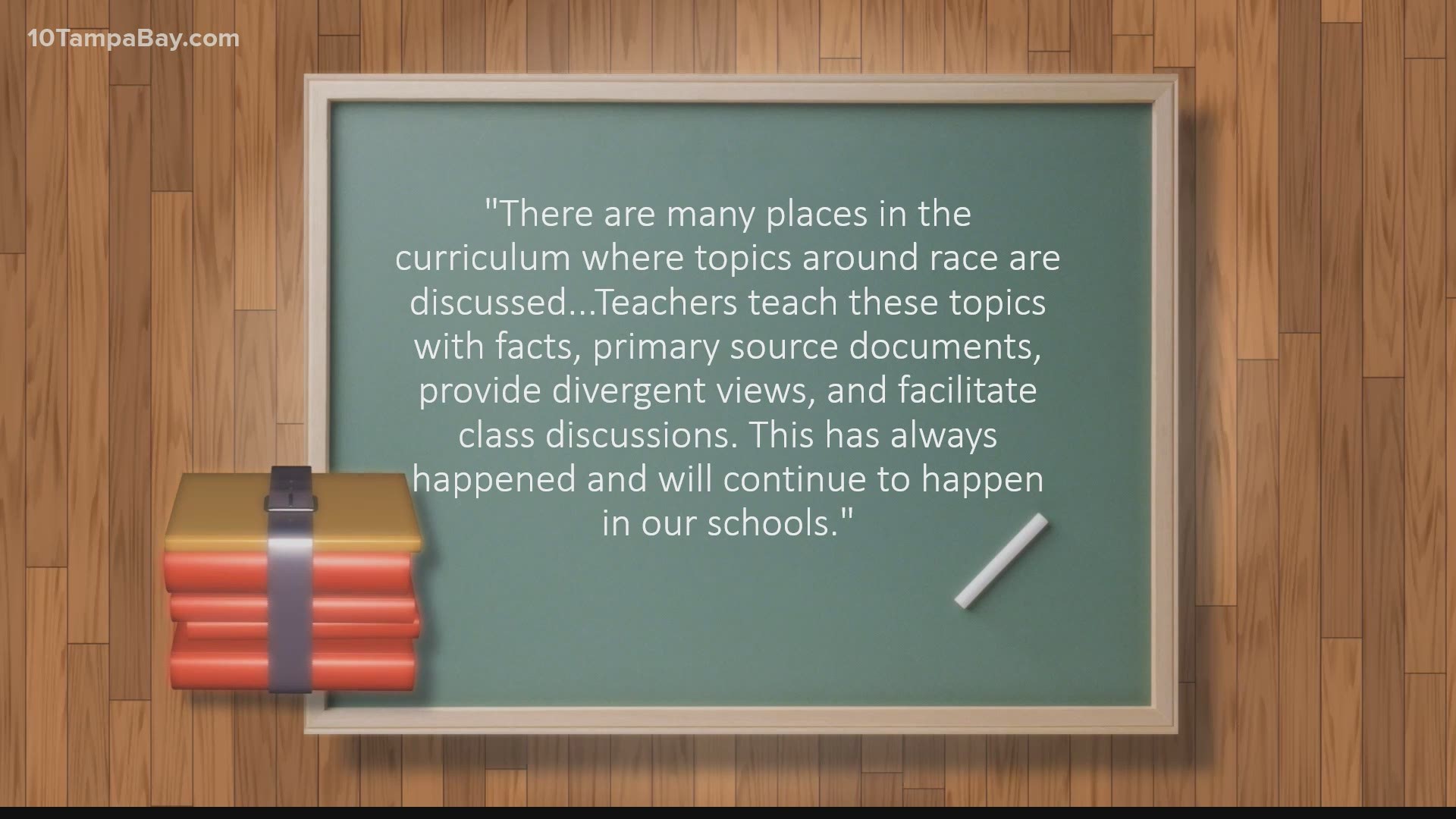 ST. PETERSBURG, Fla. — “We don't want them to skirt issues throughout the American history or in the civics classes, because they're fearful of how they might be interpreted,” said Nancy Velardi, president of the Pinellas Classroom Teachers Association.

The intense debate over critical race theory is driving teachers in Pinellas County to ask the district for protection from baseless complaints that could impact their ability to do their job.

RELATED: What is critical race theory and why is everyone talking about it right now?

"What we're asking for is protection for the teachers so that they don't have to fear that any time they bring up any subject related to race or related to culturally-relevant teaching that they will be called on the carpet by a parent,” said Nancy Velardi, president of the Pinellas Classroom Teachers Association.

Critical race theory is an academic approach to studying the systemic impact of racism, how it has influenced laws and public policy, and the impact it has on society today.

It is not currently taught in Florida primary or secondary classrooms, but recent bans on the study across the country and here in Florida have drawn attention to the topic.

Velardi said the PCTA requested a meeting with the school district to discuss protections for teachers who could face complaints with parents unclear on CRT.

“The district is doing is very clear training to the teachers so that they clearly understand what the parameters are,” said Velardi. “We are asking that if these parents with these misconceptions about what CRT, who’ve filed complaints against the teachers, that they will be protected so that they do not fear teaching a full curriculum, and an open and honest and impartial teaching of the history historical facts.”

A spokesperson for Pinellas County Schools said any complaints will be handled on a case-by-case basis and said in a statement:

Pinellas County Schools does not implement Critical Race Theory.  We follow the Florida Department of Education standards and teach students to deeply examine the history of the United States.

There are times that students bring up sensitive issues related to the world they live in. Pinellas County Schools' teachers receive the training and professional development necessary to guide students through these conversations in a neutral, non-political manner, connecting the conversations to the state curriculum standards they must teach.  If the topics are not standards-based, teachers are trained to move on to conversations within their content standards.

There are many places in the curriculum where topics around race are discussed—including the civil rights movement, the Civil War, and Brown vs. Board of Education to name a few.  Teachers teach these topics with facts, primary source documents, provide divergent views, and facilitate class discussions.  This has always happened and will continue to happen in our schools.

Governor DeSantis said to the state board of education in June that he wholly opposes CRT, but says this should not stand in the way of teaching historical facts on race-related topics.