Childhood cancer 'is not profitable': The fight for funding through the eyes of Emmi Grace Angel

Fewer than 10 drugs have been developed specifically for children and according to the National Cancer Institute, only three have been approved for use in children. 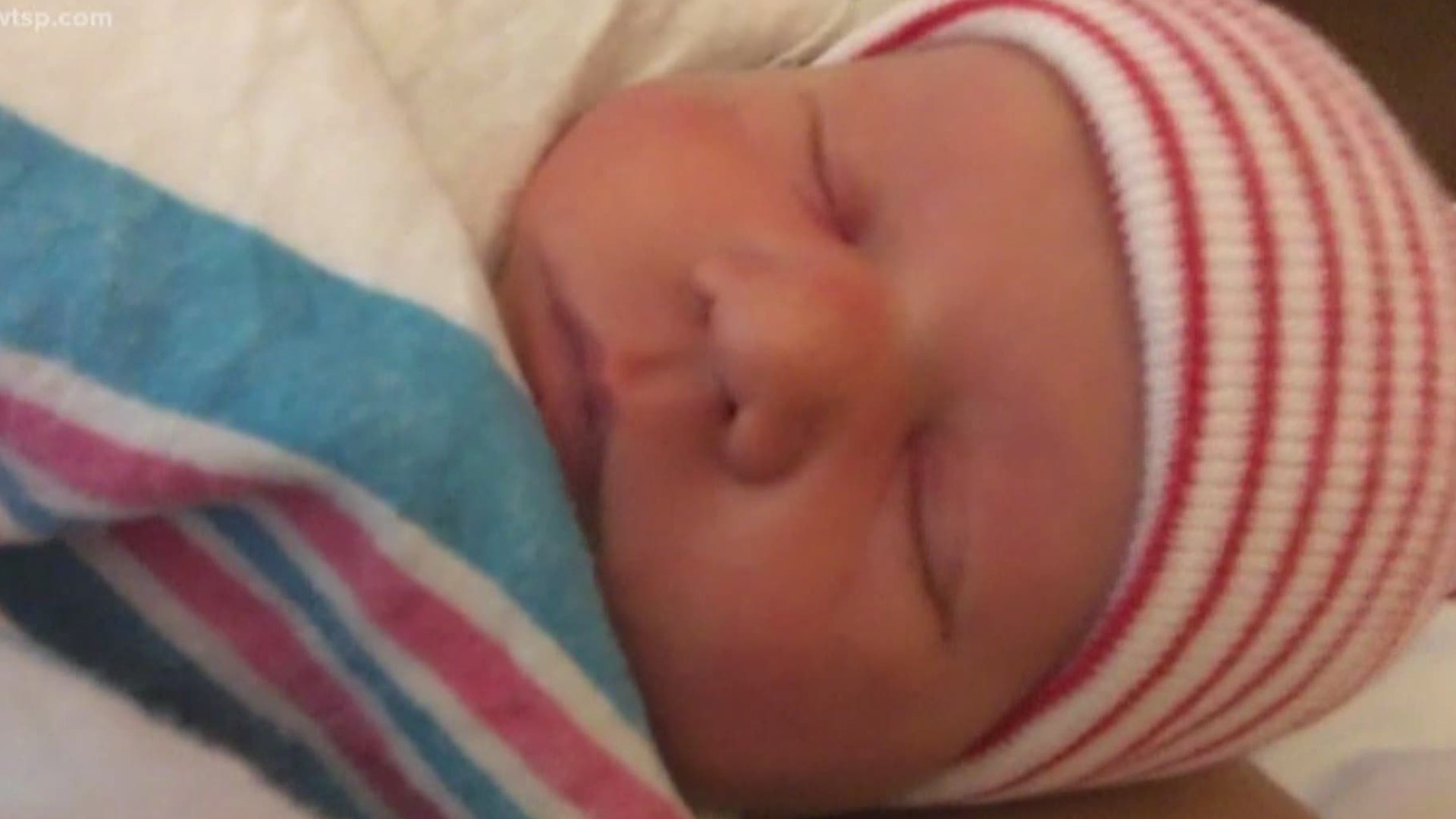 TAMPA, Fla. -- This year, 16,000 children ages 1 to 19 will be diagnosed with cancer, according to the National Cancer Institute.

And every year, the center spends billions of dollars funding cancer research, but only a fraction of that money is used to specifically research pediatric cancer.

Oncologists and parents say it comes down to the fact that childhood cancer isn’t profitable.

A Tampa mother has made it part of her mission to bring awareness to the disparity in funding for childhood cancers. Monica Angel founded the non-profit Emmi Grace’s Angels after her 5-month-old daughter died in 2016.

A life taken too soon

Emmi Grace Angel was born on Dec. 22, 2015. She was the picture of perfection and a gift to the Angel family who adopted her.

“The culmination and the excitement and all of that kind of came out in one moment and got handed to me with a bow on her head," Monica Angel said. "She was just beautiful and we were thrilled.

"She was perfect, to look at. We later learned that perhaps she wasn't.”

Photos: The fight for childhood cancer funding through the eyes of Emmi Grace Angel

Photos: The fight for childhood cancer funding through the eyes of Emmi Grace Angel

1 / 4
Provided
Emmi Grace Angel died of childhood cancer at the age of 5 months old. Since then, her family has been fighting to fund pediatric cancer research.

The Angels already had a 13-month-old daughter and Monica Angel started to feel like things were not progressing with Emmi Grace. It was more than a colicky baby as she’d been told in those first few weeks.

“There was something fundamentally in my core that knew that something was not right and I knew that I had to be the voice for her. My husband and I had to speak for her and we had to push," she said.

“Her face felt different against my face is the best way I can explain it. It just did not feel right,” explained Monica Angel.

She rushed Emmi Grace to the doctor who said there was swelling on the brain. She went straight to the hospital and within 24 hours, Emmi Grace was in surgery for an aggressive form of brain cancer.

“Our daughter had a massive brain tumor on her brain stem and it needed to be removed immediately. I remember her [the neurosurgeon] saying to me that we just really didn't want it to be ATRT,” Monica Angel said.

Doctors ultimately used a series of chemotherapy drugs that had been designed and approved decades ago for adults. The drugs had been developed in the 1950s, 1960s, 1970s and one in 1983.

"Essentially, we were giving her watered-down versions of adult medicines, which is horrifying. We did it because it was the best thing available," Monica Angel said. "We won't even give our children adult Tylenol, but we're giving them adult chemotherapy."

The treatment ravaged her daughter’s small body. It destroyed her lungs, bladder, kidneys and heart. That is when Monica says they knew they had to stop treatment.

The Angels decided to stop treatment and bring Emmi Grace back to their home in Tampa. Emmi Grace died in the ambulance.

She was 5-months-old and her story is the reality of pediatric cancer treatment.

“My daughter did not die from cancer. My daughter died from outdated and toxic chemotherapy designed for adults and that is not an acceptable thing in this country," Monica Angel said.

Finding a solution to help children

Since 1980, fewer than 10 drugs have been developed specifically for children and according to the National Cancer Institute, only three have been approved for use in children. Those three drugs have helped cure children with certain cancers like childhood acute lymphoblastic leukemia, or A.L.L.

Dr. Mark Mogul, medical director for pediatric hematology/oncology at St. Joseph’s Children’s Hospital, says to increase survivability there needs to be better drugs intended for children and that takes clinical research which needs a lot of money. He says the money isn’t there because the profits for pediatric cancer aren’t there.

“There's very few new agents that are developed for pediatrics and the reason for that, unfortunately, is an economic one. There's about 10,000 new cases of pediatric cancer (ages 15 and younger) diagnosed in this country every year," Mogul said. "There's over a million adult cancers diagnosed, so a lot of the big pharmaceutical companies are going to spend their time and effort and research trials that will look at a million people versus 10,000."

Pediatric cancer research is grossly underfunded by the government. Congress funds the National Cancer Institute and for FY 2017, it had a budget of $5.6 billion. About 6.2 percent, or roughly $352 million, is budgeted for all 12 major pediatric cancers and the subtypes.

That was less than all of the money spent to research breast cancer (FY 2017 $584,162,181) and closer to the funding for prostate cancer with $205 million. The average age of a prostate cancer patient is 66.

The average age of a child with cancer is 7.

“It's wonderful to have a 70-year-old or an 80-year-old be given five or 10 more years of quality of life. When you're looking at a 3-year-old who we want to live 80 more years and have children and families of their own it's so much more compelling to think about how incredible that would be to be able to cure a child," Mogul said.

"The reason I think it's even more important to look at the research for children is that many of these diseases are curable."

That’s what fuels Monica Angel to keep fighting. She lost her daughter in a battle with cancer but learned that she is a powerful advocate for those without voices. Monica Angel and others successfully lobbied for the STAR Act.

It’s the most comprehensive childhood cancer legislation. She wants more funding to follow.

“I want to be able to say we're funding research and children are going to live,” she said.

Angel says there are two things you can do to help: First, reach out to your lawmakers and let them know that you care about pediatric cancer and want funding. Second, when donating to organizations find out how much goes to childhood cancer research.

Click here to find sample language to write your lawmaker and let them know you want to fully fund pediatric cancer research: https://www.emmigracesangels.org/call-to-action/

Click here to learn more about the funding gap: https://www.stbaldricks.org/filling-the-funding-gap