Coronavirus in Florida: Where we stand with cases, deaths and hospitalizations

The state continues with Phase Two of reopening the economy even as the number of cases keep climbing. 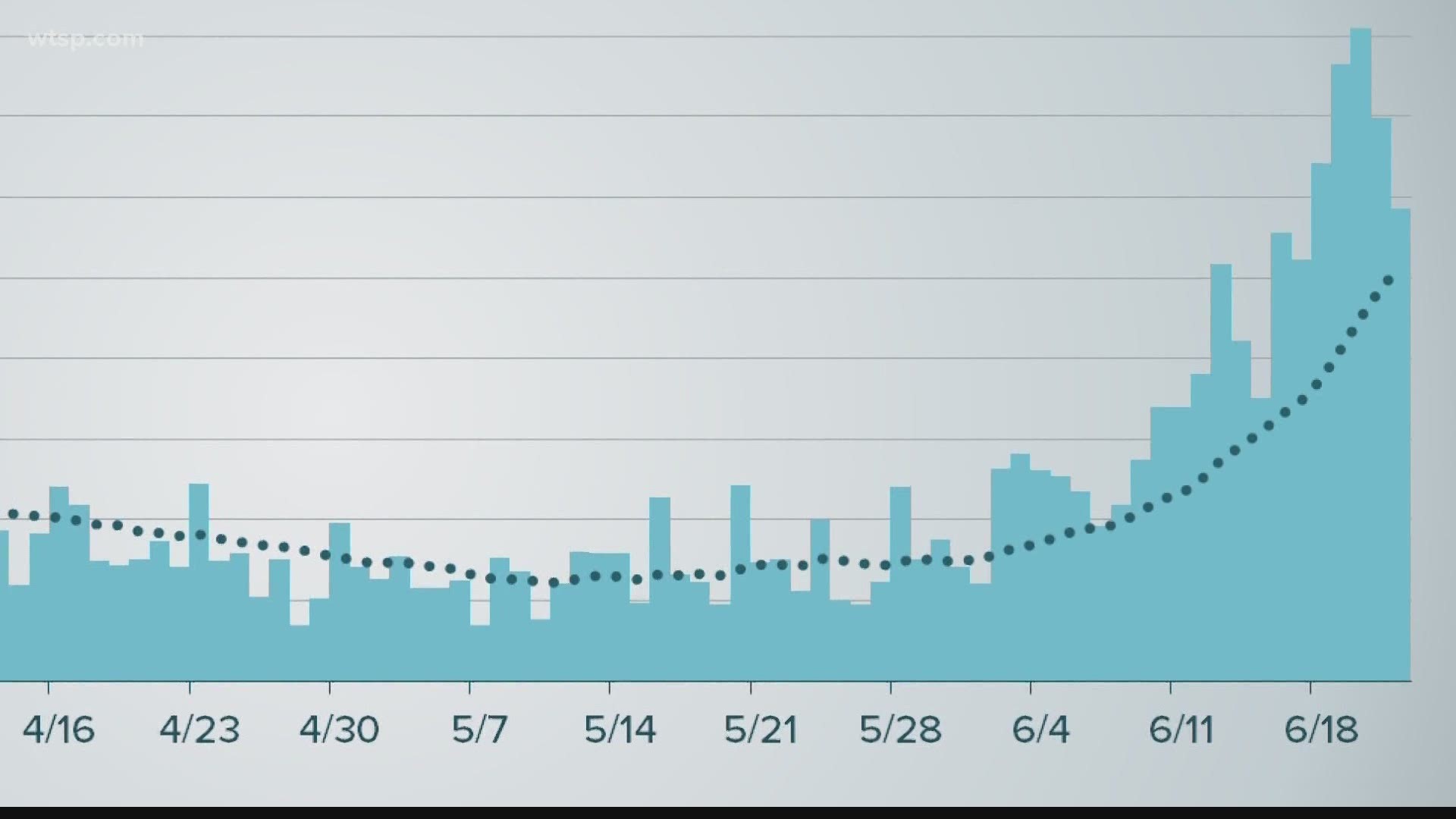 ST. PETERSBURG, Fla. — The number of new positive coronavirus cases since the start of June has trended against guidelines for reopening from the White House and Centers for Disease Control and Prevention.

There has not been a downward trajectory of documented cases or percent of positive cases within the past two-week period. The trend has been increasing, with single-day record case highs recorded multiple times.

Nevertheless, Florida Gov. Ron DeSantis last week said the state remains on track with Phase Two to reopen the economy since the early peak of the pandemic.

DeSantis said testing within the most vulnerable and high-risk populations has shown the highest positivity rates for the virus and the most cases. He, too, leaned into data showing the median age of those with the virus is down into the 30s, leading to an overall lower hospitalization rate.

The Florida Department of Health on Tuesday, June 23, reported 3,289 new COVID-19 cases throughout the state. There are a total of 103,503 cases, representing Florida residents and non-Florida residents.

Since about mid-April, the state's 14-day moving average trended downward and under 1,000 cases but experienced a sharp rise from June 1 onward. This does not satisfy the federal government's criteria for cases at this time.

The moving average for the first time crossed the 2,000-mark Friday.

Here are the past several days of new cases statewide:

According to Florida Health, the percent of positive test results within the past two weeks ranged from a low of about 4 percent on June 8 to a high of 12.27 percent on June 19 -- an upward trend representing all-new cases.

The trendline for testing overall since the start of the month is flat or slightly decreasing.

The average number of deaths has trended downward since the beginning of May and is well off the peak of 51 average deaths.

Florida's COVID-19 hospitalization rate remained steady throughout much of the pandemic before a dip into early June. The 14-day moving average has since been on the increase but remains lower than levels seen in mid to late April.

The state has a capacity of 5,963 adult ICU beds, with 1,647 available -- or 27.62 percent, according to the Agency for Health Care Administration. DeSantis again indicated Friday he is confident the state has the capacity to take in additional COVID-19 patients if a sudden spike in hospitalizations were to occur.

RELATED: Cruise industry suspends sailings from US ports through September

Note: Data sourced from The COVID Tracking Project updates once a day and is updated during the late afternoon. Here is a guide about how data is collected.