The FDLE says it began an investigation after being told by the Department of Health that a person illegally hacked into its emergency alert system. 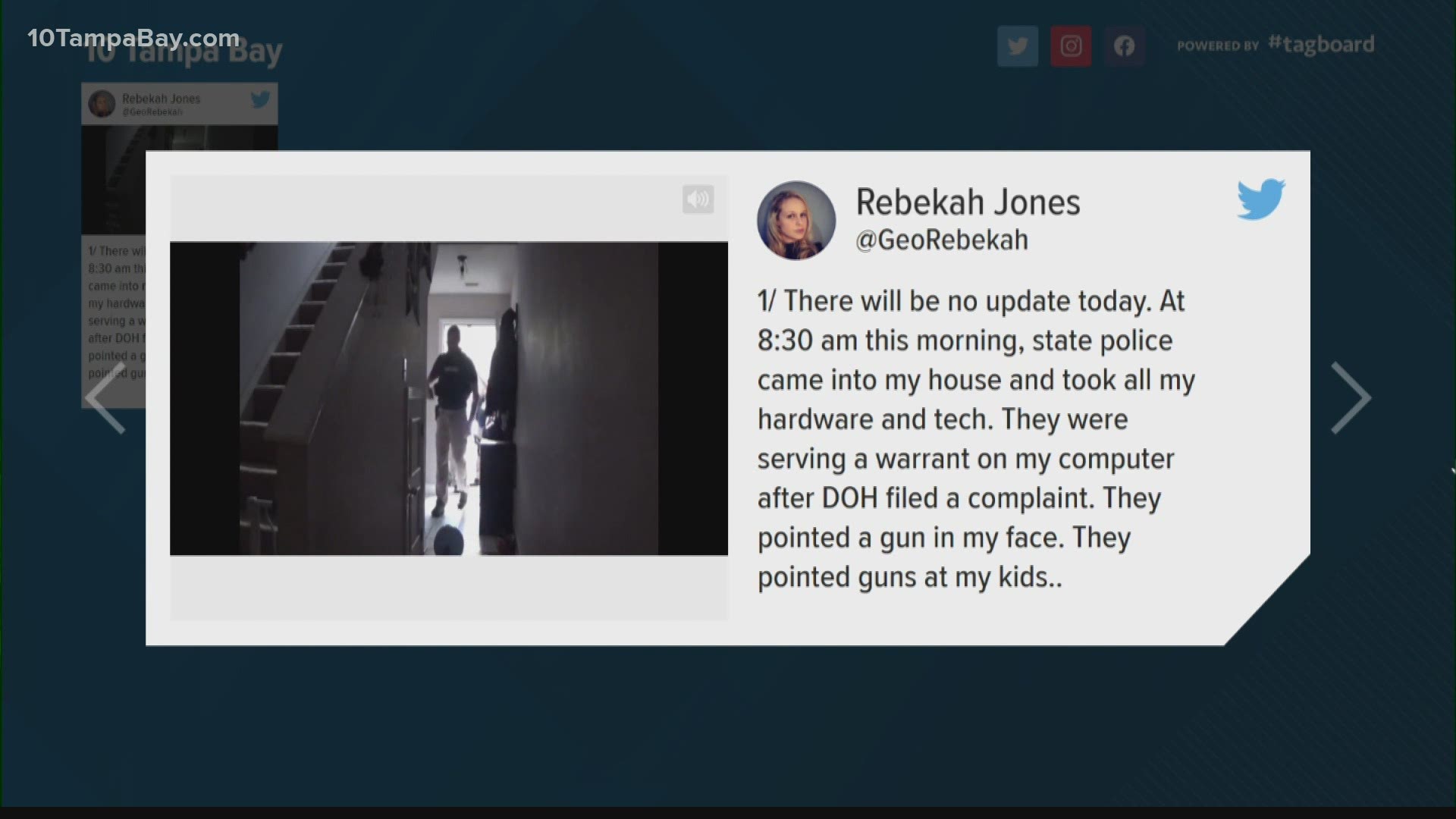 TALLAHASSEE, Fla. — The ousted Florida coronavirus dashboard manager, who went on to launch her own alternative system after her firing, posted a video she says shows her home being raided by law enforcement.

The Florida Department of Law Enforcement accuses Rebekah Jones of possibly getting into a Department of Health communications system and sending a text to users of the State Emergency Response Team.

Jones made headlines when the state let her go in May. At the time, Florida leaders said she was asked to resign due to insubordination. However, Jones alleged she was fired after she was asked to manipulate COVID-19 numbers on the Department of Health's website.

In the months since, Jones has been outspoken on Twitter. On Monday, she tweeted a 31-second video she says shows state police coming into her Tallahassee home and seizing her computer equipment.

"They were serving a warrant on my computer after DOH filed a complaint," Jones wrote. "They pointed a gun in my face. They pointed guns at my kids."

In a statement, FDLE Commissioner Rick Swearingen confirmed hardware was seized at Jones' home, and an investigation was underway into a potential computer system hacking.

"Our investigation began last month following a complaint by Florida Department of Health that a person illegally hacked into their emergency alert system," the statement reads, in part. "As part of our investigation, FDLE agents served a search warrant this morning at the Centerville Court residence where Ms. Jones lives after determining the home was the location that the unauthorized message was sent from."

"They took my phone and the computer I use every day to post the case numbers in Florida, and school cases for the entire country," Jones tweeted. "They took evidence of corruption at the state level. They claimed it was about a security breach.

"This was DeSantis. He sent the gestapo."

1/
There will be no update today.

At 8:30 am this morning, state police came into my house and took all my hardware and tech.

They were serving a warrant on my computer after DOH filed a complaint.

Swearingen in his statement contended Jones did not initially respond to the FDLE agents at her door.

"Agents knocked and called Ms. Jones both announcing the search warrant and encouraging her to cooperate. Ms. Jones refused to come to the door for 20 minutes and hung-up on agents," his statement reads, in part. "After several attempts, Ms. Jones allowed agents inside. Agents entered the home in accordance with normal protocols and seized several devices that will be forensically analyzed.

"At no time were weapons pointed at anyone in the home."

The text message in question, according to the affidavit for a search warrant provided by the FDLE, was sent Nov. 10 and urged people "to speak up before another 17,000 people are dead. You know this is wrong. You don't have to be part of this. Be a hero. Speak out before it's too late." According to the Department of Health, there were a total of 17,460 coronavirus-related deaths among Florida residents and non-residents noted that day's report.

Jones' lawyer, Larry Walters, in a statement said "this is retaliation for pursuing a discrimination claim against the state."

"It is highly unusual for your adversary in litigation to seize all of your client’s confidential communications," Walters said. "We are concerned that this is retaliation for pursuing a discrimination claim against the state and criticizing the Governor’s COVID 19 response.

"We will thoroughly investigate these issues and take all necessary action to protect our client’s rights."

Jones, during an appearance Monday evening on CNN's "Cuomo Prime Time," called the raid an attempt by DeSantis to intimidate scientists.

The warrant served today stems from investigation into someone illegally accessing the @HealthyFla emergency messaging alert system. FDLE agents suspect it was Jones.

She was asked about it on @CuomoPrimeTime on CNN tonight @10TampaBay pic.twitter.com/PNQ07MZELT

"They took my phone and they took the computer that I use to run my companies," she said. "And on my phone is every communication I've ever had with someone who works at the state who has come to me in confidence and told me things that could get them fired or in trouble like this.

"And I just want to say to all those people right now, if he doesn't know already, DeSantis will know soon enough that you've been talking with me, so be careful." 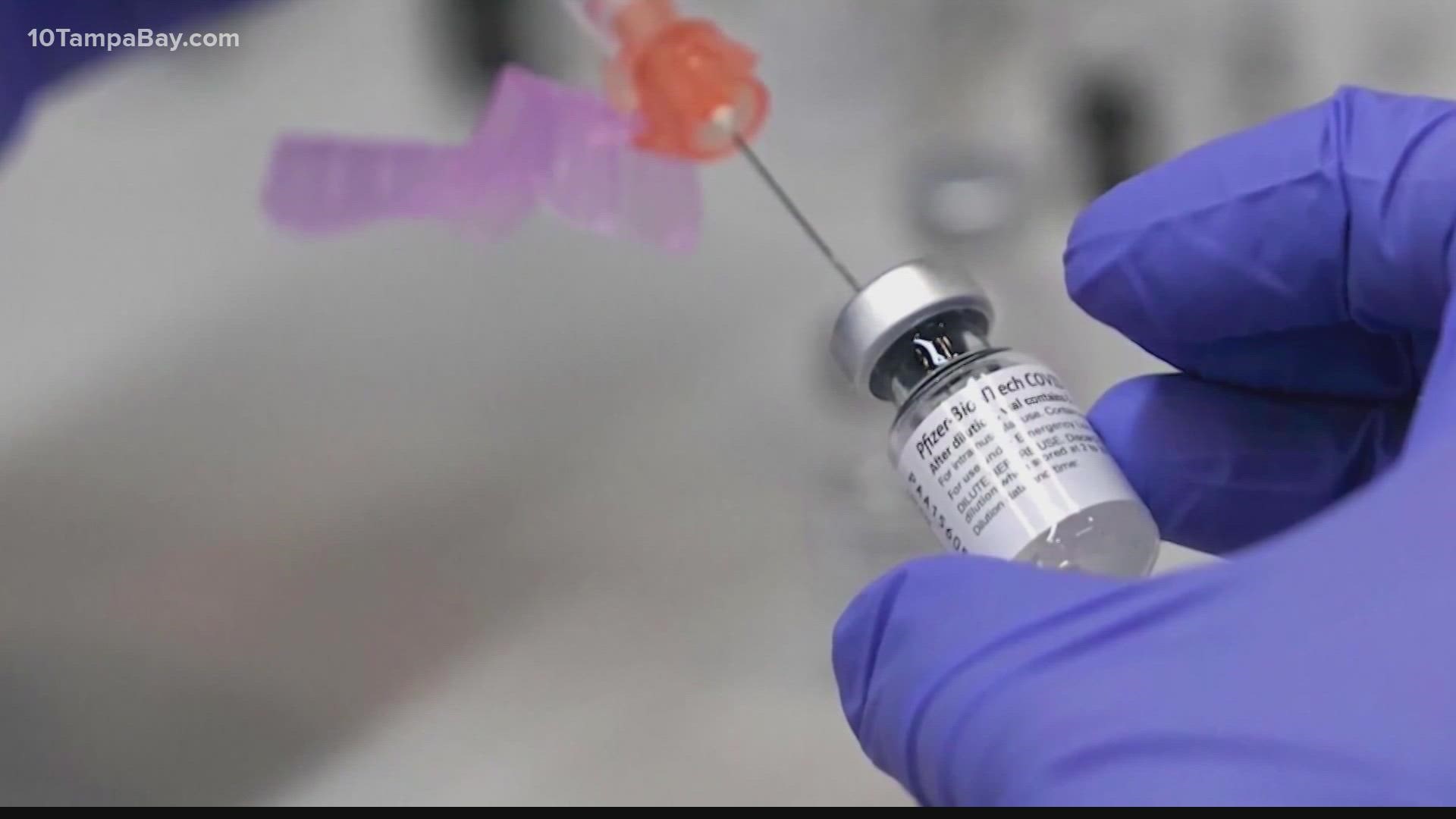