Hillsborough County Sheriff Chad Chronister said he put the congregation of the River at Tampa Bay Church in danger. 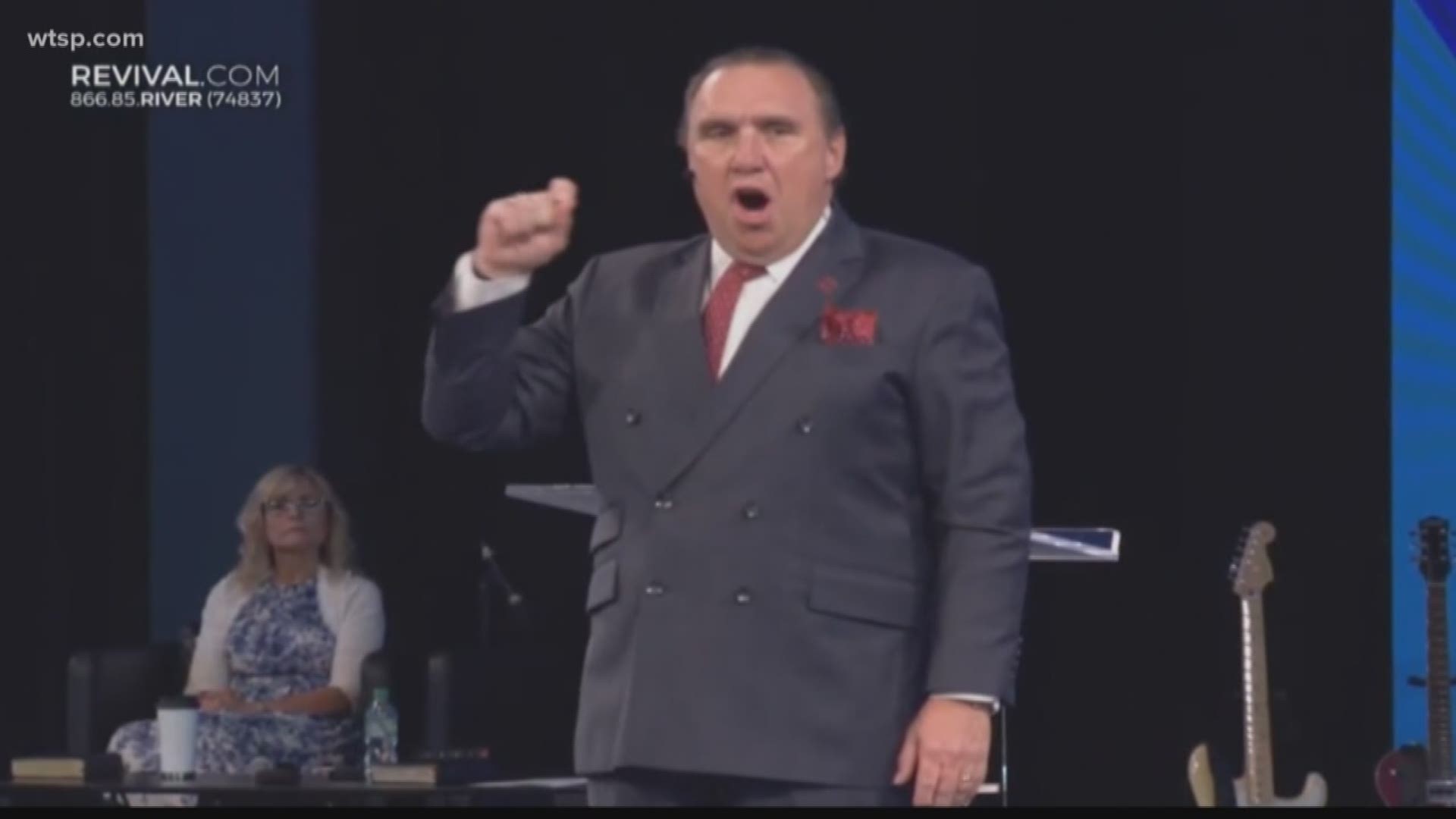 An arrest warrant for Tampa Bay pastor Rodney Howard-Browne was issued Monday, and the pastor was taken into custody after the sheriff said the church violated a countywide "safer-at-home" order.

Hillsborough County Sheriff Chad Chronister said the River at Tampa Bay Church violated the county's order related to large gatherings and social distancing amid the coronavirus pandemic. A live stream from the church on Sunday showed the building packed with worshippers.

When Chronister saw images from a crowded Sunday service at the church posted online, he was furious.

“We received an anonymous tip that Dr. Rodney Howard-Browne refused a request to temporarily stop holding large gatherings at his church,” he said. “And instead, he was encouraging his large congregation to meet at his church.”

Hours later, the sheriff along with Hillsborough State Attorney Andrew Warren, filed a pair of charges against Howard-Browne, including unlawful assembly.

Chronister said it was a "reckless disregard for public safety."

RELATED: Stay-at-home vs shelter-in-place: Here's what they mean

Credit: AP Photo/Chris O'Meara
The River Church is shown Monday, March 30, 2020, in Tampa, Fla. The Hillsborough County Sheriff's Office has warned the megachurch about violating a safer-at-home order in place to limit the spread of coronavirus. The church is continuing to hold Sunday church services despite warnings for social distancing in order.

Chronister said Howard-Browne refused requests to stop gatherings at the church and even encouraged people to meet at the church. Chronister said the pastor "put hundreds of people in his congregation at risk," and in turn thousands of Tampa Bay residents in danger.

Hillsborough County issued a "safer-at-home" order effective March 27. Under the order, businesses that are considered essential must be able to operate under the CDC's social distancing guidelines, keeping employees and customers six feet away from each other. If they can't do that, they must shut down.

"The safety and wellbeing of our community must always come first," Chronister said.

The church’s response was to describe itself as an essential service even though houses of worship have not been given that designation.

The church said it's important for it to give people who need prayer a place to go for healing or comfort. A statement the church made earlier this month on Facebook said it is doing everything in its power to sanitize and clean surfaces and take other measures to keep the community safe.

The sheriff's office also said the church provided bus service to and from the church for Sunday services.

State Attorney Andrew Warren said having large gatherings during the order is "not only reckless, it's illegal."

According to the sheriff's office, Howard-Browne has been booked into the Hernando County Jail. He will be charged with unlawful assembly and violation of public health emergency rules.

Violations of Hillsborough County‘s “safer at home“ order are considered second-degree misdemeanors punishable by up to 60 days in jail and fines of up to $500.

Some have questioned whether the sheriff’s office has the legal authority to take such action, citing the separation of church and state. But constitutional law experts say there is precedent.

Lou Virelli, a constitutional law professor at Stetson University, says a U.S. Supreme Court case from 30 years ago – Employment Division v. Smith, essentially says that as long as the government isn’t asking the church to do something it isn’t asking everyone else to do, it’s on solid legal ground.

“Of course, if they were targeting churches, if worship ceremonies were singled out, that would be a totally different situation,” Virelli said. “But I think it’s fair to say that’s not what’s happening here.”

As for next week? Chronister says he hopes this shows church members how serious they are about enforcing the county’s order and encourages them to do what others have done by sharing their religious services online and through social media.

“I believe there’s nothing more important than faith in a time like this. And as a sheriff’s office we would never impede someone’s ability to lean on their religious beliefs as a means of comfort,” Chronister said. “But practicing those beliefs has to be done safely.”