Two recent deaths emphasize the importance of children learning how to be safe in the water. 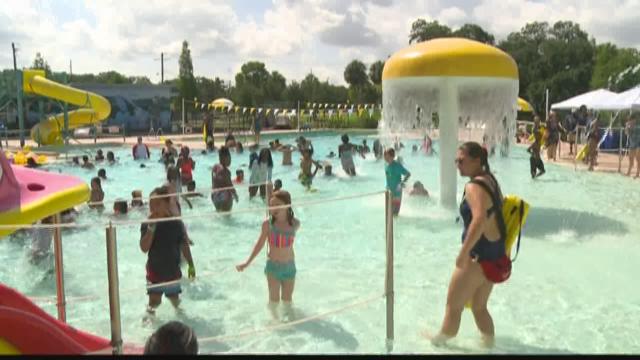 TAMPA, Fla. — Thursday marked the 10th year for the “World’s Largest Swimming Lesson”. Tens of thousands of kids in 20 countries around the world participated.

That includes a few watering holes right in our own backyard.

Sadly, there were two more drowning deaths involving children in the Tampa Bay area this past week, which is why this worldwide massive swim lesson took on an even more important role this year.

While getting in the pool was fun and games for most, it was nerve-wracking for Shameka Brown.

The Tampa mom of three watched her children like a hawk as they took their lesson at a pool in Sulphur Springs.

Especially her 11-year-old son Winston -- because not so long ago he nearly drowned.

Brown had also heard about two children drowning in the Tampa Bay area his week, and she decided she wasn’t going another summer without making sure her children could swim.

It’s why thousands of parents around the world and the Tampa Bay area were participating in the world’s largest swim lesson.

You’re never too young to know how dangerous of a place Florida can be if you don’t know how to swim. Just ask 4-year old Aurione McCray, who was among the kids taking a lesson.

If you don’t know how to swim it’s important to learn, she said, “Because then you would drown.”

Splashing in the shallow water can be dangerous too. But it was a recent trip to the deep end that nearly spelled deep trouble for 10-year-old S’nya Walker.

So, S’nya and her cousins were in Tampa sharpening their swimming skills too.

“Well, it was scary because my nose was hurting when I fell. And I didn’t, like, know how to swim at the time,” she said relaying a frightening story of when she nearly drowned. “So, I just called my parents to help me.”

Castor literally jumped in with both feet, joining kids in the pool for the swim lesson. It’s the sixth year the city has participated in the program.

Drowning - which is often preventable – remains the top cause of injury-related deaths among children ages 1-4. It’s second for kids under 14.

“And we are surrounded by water, which is a wonderful gift for us living here in Florida, but we have to pay attention,” said Castor.

The official World’s Largest Swim Lesson may only last a day, but the opportunity to learn how to swim continues through the summer and beyond.

In Tampa, for example, they’re offering eight lessons for just $24 at city pools this summer. If you can’t afford it, they’re even willing to help pay for it.

Tampa is by no means alone.

Lots of other spots around the Tampa Bay area are also offering free or low-cost swim lessons. To find the one nearest to you, just check out this list:

Must register at the Aquatic Center- 6630 Van Buren St.