They say they're suing to help people with disabilities. Critics say they want 'blood money.'

The Americans With Disabilities Act was supposed to make businesses more accessible for people with disabilities. It's now reigniting a debate in the digital age. 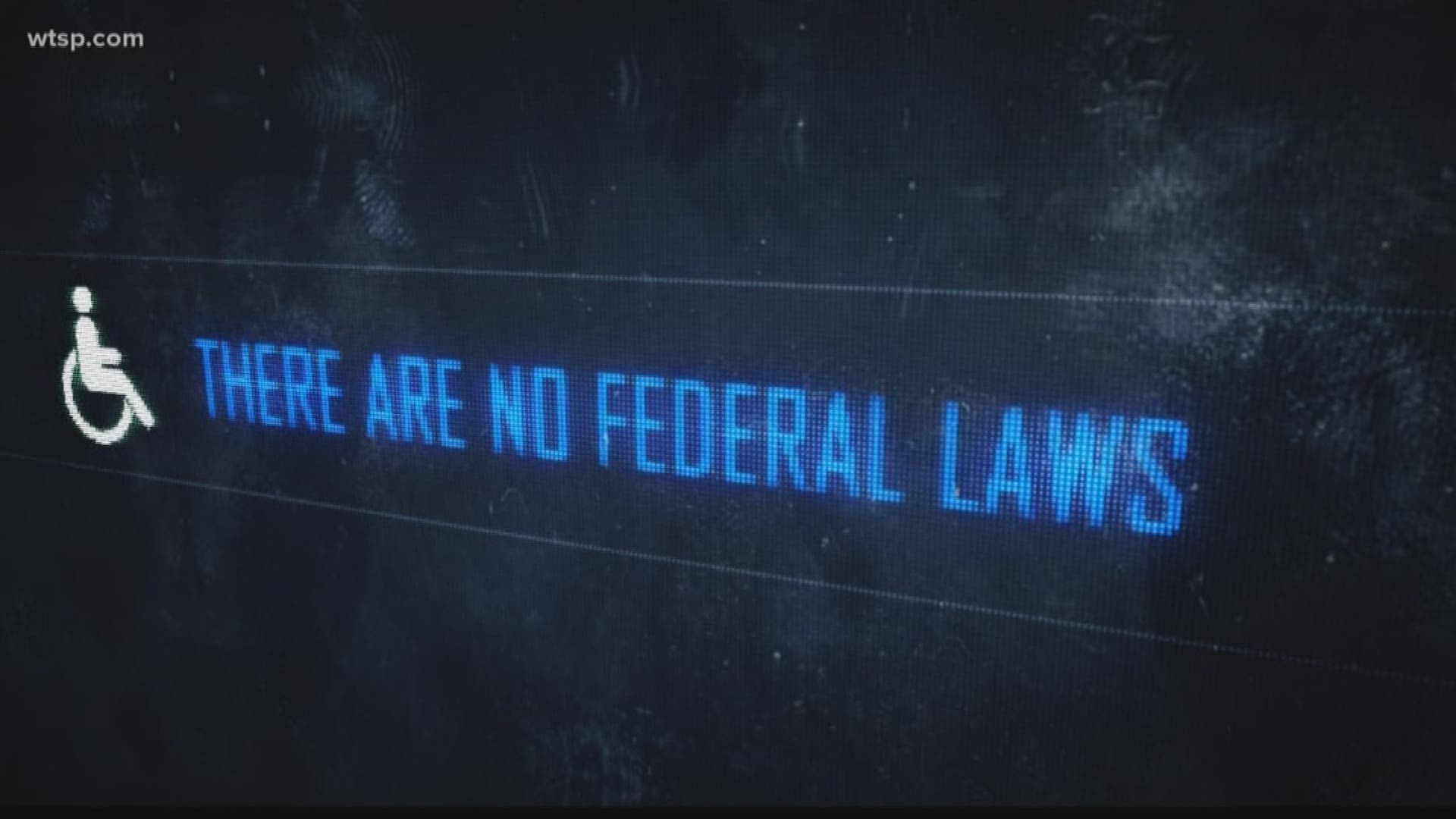 Before she goes to a shop or restaurant, the top thought on her mind is: Will the place be accessible?

For Jen, an avid traveler, getting around depends on more than her personal home being accessible. She also requires appropriate travel accommodations.

Jen says it takes a lot of extra planning when she travels.

“It’s a crap shoot. Some places will have symbol that have wheelchair accessibility, call this number and we’ll take care of you, which is fine by me; then I know what to do,” Jen said. “Otherwise, I’ll go to establishment, and there won’t be anything about accessibility, and it will be a red flag – is this even going to be possible.”

Since then, lawsuits have popped up across the country around businesses that don’t have physically-accessible amenities; but, over the past few years, those lawsuits have expanded to the cyber world. Lawyers have started to set their sights on hotel and restaurant websites. In some cases, the same lawyers are filing dozens – and even hundreds – of lawsuits. 10Investigates sat down with one Bay Area attorney who says these lawsuits are essential.

“Websites are places of public accommodation just like a hotel, just like a store,” civil rights attorney Melissa Mince said.

Mince has filed 35 to 40 of these lawsuits, 19 in Pinellas County alone since the beginning of 2019.

One of those lawsuits was served to the Ponce De Leon Hotel in St. Petersburg.

Eunice Mungai, the manager of the property says the business was blindsided, not only by the lawsuit, but by the fact that they were never given any time to comply and fix their website.

In order to settle the claim, Eunice says they would have to pay thousands of dollars because their website did not give an option for someone to book an ADA accessible room.

Eunice told 10Investigates these types of suits could shut down small businesses, like hers.

"You’re a small business and five to 10 people demanding $4,000. At end of the day you will get bankrupt,” she explained.

Eunice says she had no idea they needed to include that information on the website, but staff were ready to make the changes.

Eunice isn’t alone. 10Investigates was contacted by multiple small businesses in the Bay Area that received nearly identical lawsuits. All of the small business owners said they had no idea they were required to include these details on their websites but said they were more than happy to make changes to their sites.

However, they were never given the option to make changes. Instead, they were told to pay up, usually thousands of dollars. While no time period for compliance was given, several of the suits said if changes weren’t made in 90 days, they could be sued again.

This is where it gets complicated. The City of St. Petersburg tells 10Investigates there are no federal laws regulating specifically what hotels need to make public on their websites. There are guidelines which suggest that a hotel “Modify its policies, practices, or procedures to ensure that individuals with disabilities can make reservations for accessible guest rooms during the same hours and in the same manner as individuals who do not need accessible rooms.”

Eunice and other hotel owners say their biggest issue is they were never given any time to fix their websites.

10Investigates: Nursing homes are required by law to have backup generators. Many still don't.

Melissa Mince, says as an attorney, she does not have to give any notice.

“They’ve had almost 30 years,” Mince said. “How much more notice do they need?”

10Investigates’ Jennifer Titus: “Are you guys taking advantage of a loophole possibly in the law?”

Mince: “There’s no loophole. There is no loophole. It’s very clear, every place with public accommodations will follow the ADA, and they have had 30 years to do it.”

Tom Cleary, who is an insurance agent for several small businesses in the area, disagrees.

He says the problem is the same thing that Eunice brought up. There’s no time period to fix the fact the site is not in compliance. Cleary believes these lawsuits are being filed at a high rate by lawyers who don’t care if the site becomes compliant. He says it’s more about the money.

“If you’re suing someone on a federal level and you bring them to a local civil court, that tells me you’re being sloppy,” Tom explained. “All you want to do is get the paperwork in front of that business owner to scare the crap out of them, the next thing you know, you get your 10 grand and you’re on to the next one. That’s just wrong.”

Florida is a hotbed for these cases. According to the Bureau of Internet Accessibility, Florida represents about 25 percent of all website accessibility lawsuits.

These cases aren’t specific to Tampa. They are being filed statewide. Attorney Drew Levitt has been filing ADA based lawsuits for the past 11 years. So far, he’s filed at least 566 that 10Investigates could find. He says only a fraction of those cases are based on website cases like Ponce de Leon. And, he defends his decision to continue filing.

Turn To 10: Covered in raw sewage: Neighbors Turn To 10 after dealing with human waste in their yards

10Investigates’ Jennifer Titus: “So, you’re telling me these smaller businesses [that] have been sued, you are sending a letter saying, ‘hey you’re not compliant’ before dropping this lawsuit on the table?”

Levitt: “No. I said we have done that in the past for different ADA claims.”

Like local businesses that have been sued, Tom takes major issue with these tactics.

“A better solution would be if we could have two weeks or a month to notify whatever authority it is at ADA and say ‘hey we realize our site isn’t in compliance, we’ll have it done in the next week, we’re working toward it’ and let it go instead of paying this blood money which is essentially what it is,” Tom said.

Jennifer French: “I understand you’re a business. I get it. At the same time, how are you going to comply with the law? And how are we going to get people to comply with the law? We have been banging are heads against the wall for years trying have equal access. When do we have to come to a breaking point? We need to approach this in a different way. We don’t need to have this tit for tat with lawsuits and businesses to comply.”

10Investigates’ Jennifer Titus: “So are lawsuits the answer or is it education?”

French: “I would like to see more education. I would not like to see the answer be a lawsuit.”

The federal government has also taken notice of the issue. Due to the increase in ADA website accessibility lawsuits, The House passed legislation in 2018 that would have required plaintiffs to provide written notice to the business that was non-compliant before filing suit. The company would then have 60 days to get into compliance. But, that bill failed in the U.S. Senate.

Got a tip for 10Investigates? Email our team confidentially at tips@wtsp.com or leave a voicemail at (727) 577-TIPS.