Several local law enforcement agencies have removed the use of neck restraints following the death of George Floyd in Minneapolis. 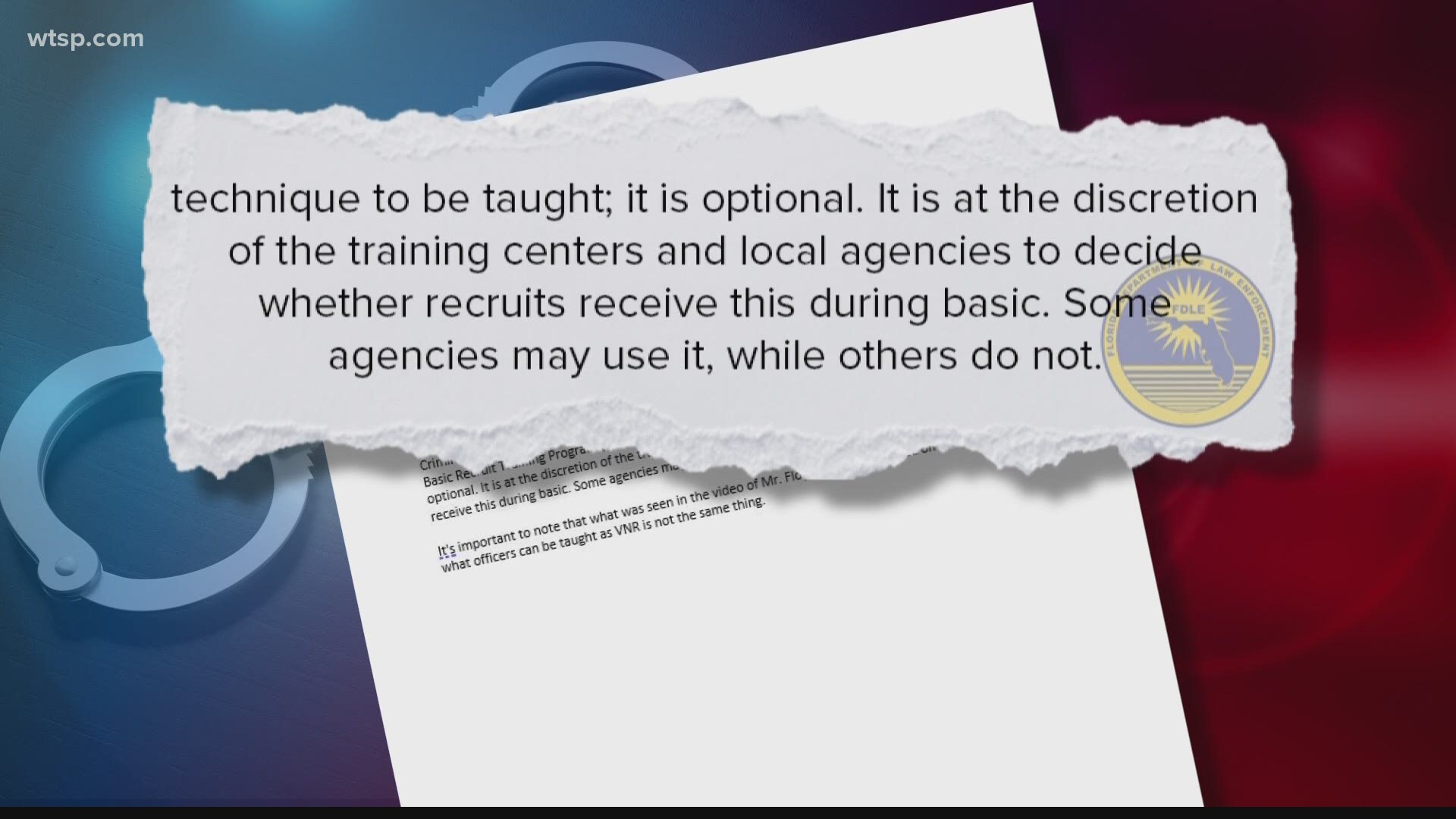 The Temple Terrace Police Department said it has suspended the use of neck restraints in policing.

"In light of recent events, the Temple Terrace Police Department is reviewing our response to resistance policy and has suspended the use of the Vascular Neck Restraint."

This is the second local department to make this decision. Sarasota police sent a memo banning their policy last week.

The Wauchula Police Department also responded to our requests with this email:

"We review every policy annually to ensure compliance with Accreditation standards and any new law changes. Deadly Force as defined in Florida Statute means the force applied is likely to cause death or great bodily harm. As such, the means by which the force is applied, for example, firearms or physical hands-on techniques, are not dictated by this agency to the respective officer. This agency’s stance is the officer has to meet the criteria to use deadly force, whereas based on the totality of the circumstances, such force is necessary to prevent imminent death or great bodily harm to himself/herself or another, or to prevent the imminent commission of a forcible felony. Deadly force is only permitted to continue until such time as the assailant has withdrawn or terminated their use of force or course of action. This agency does not dictate what type of force can be used as “deadly force”, as the term itself refers to the likeliness of death or serious bodily injury whether it be from a firearm or physical self-defense measures. We do not, however, in any non-deadly force scenarios allow or support the use of neck restraints or any strikes to the neck area as this type of force would always be considered deadly force in any scenario."

While the Minneapolis Police Department has condemned former officer Derek Chauvin’s actions in the death of George Floyd, the department allows officers to perform neck restraints, according to its policy manual.

In a news conference Wednesday, Gov. Ron DeSantis was asked directly about neck restraints being used by law enforcement agencies in the state.

“I asked FDLE and they said they do not train to put a knee on a neck like that,” DeSantis said.

That is true, but 10 Investigates found the Florida Department of Law Enforcement does teach a neck restraint technique.

FDLE sent us this statement:

“Vascular Next Restraint is a defensive tactics technique that is approved to be taught by the Criminal Justice Standards and Training Commission. VNR is a technique that is included in the Basic Recruit Training Program (BRTP); however, it is not a mandatory technique to be taught; it is optional. It is at the discretion of the training centers and local agencies to decide whether recruits receive this during basic. Some agencies may use it, while others do not.”

And, that includes agencies right here in the Tampa Bay Area.

They do clarify that the tactic is only to be used as a last resort or deadly force tactic, meaning the tactic can cause death if it’s not done properly.

“That’s the only time you can use a chokehold, to save your life,” Auburndale Police Chief Andy Ray told 10 Investigates in a phone interview.

The Dade City Police Department says the training it does “applies the pressure in an arm hold against the neck. This is a defensive tactic that is part of the Criminal Justice Standards and Training Commission Standards."

Lt. Bran Uppercue with Dade City Police said he has "never seen the use of a knee like in the Floyd case."

The department recently placed an officer on leave after video emerged of him kneeling on a man’s neck.

“What happened to George Floyd should never have happened. That is unacceptable. There is no excuse for it, there’s no reason for it," Ray said.

Ray says he’s never used or seen a chokehold used in his 33 years in law enforcement.

Some lawmakers across the country have called for a nationwide ban on neck restraints for law enforcement agencies, including former Orlando police chief and current congresswoman, Rep. Val Demings.

When asked about this policy -- 13-03.13 Use of Choke Hold: A choke hold is never permitted unless deadly force is authorized -- the Pinellas County Sheriff's Office sent this statement:

"The Pinellas County Sheriff’s Office is always mindful of our policies, especially those that are high risk, such as our use of force policy. We constantly review our policies to ensure we are serving the community the best we can. Our use of force policy does not require any changes because PCSO does not utilize neck restraints/choke holds. Choke holds are never permitted unless deadly force is authorized. Please remember, deadly force is force that is likely to cause death or great bodily harm."

On June 4, the Pinellas Board of County Commissioners made a request to all of its county law enforcement agencies to review their "Use of Force Policies."

You can read the full request here.

From 2014 through 2019, at least 20 states enacted 39 bills addressing law enforcement use of force 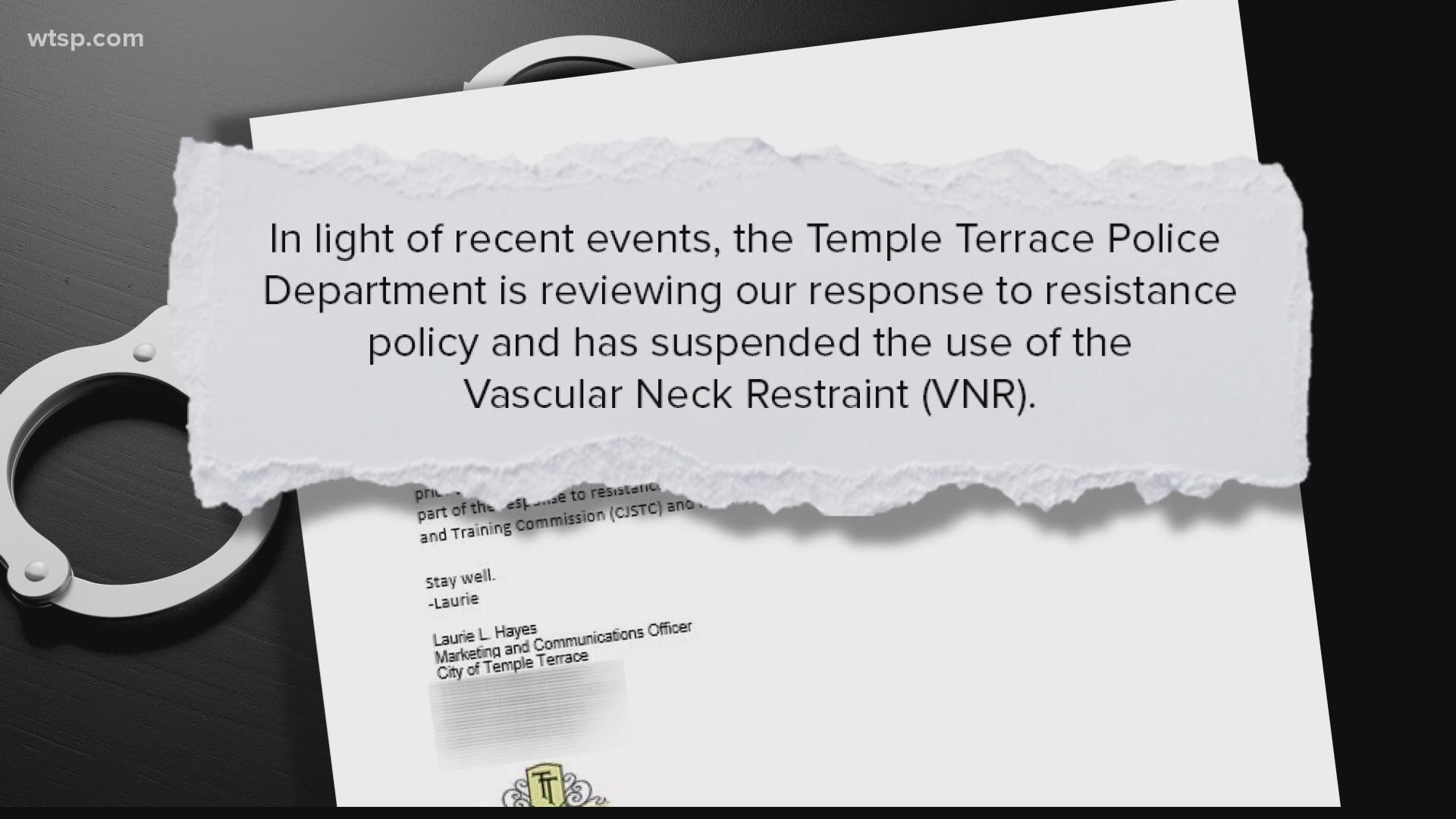