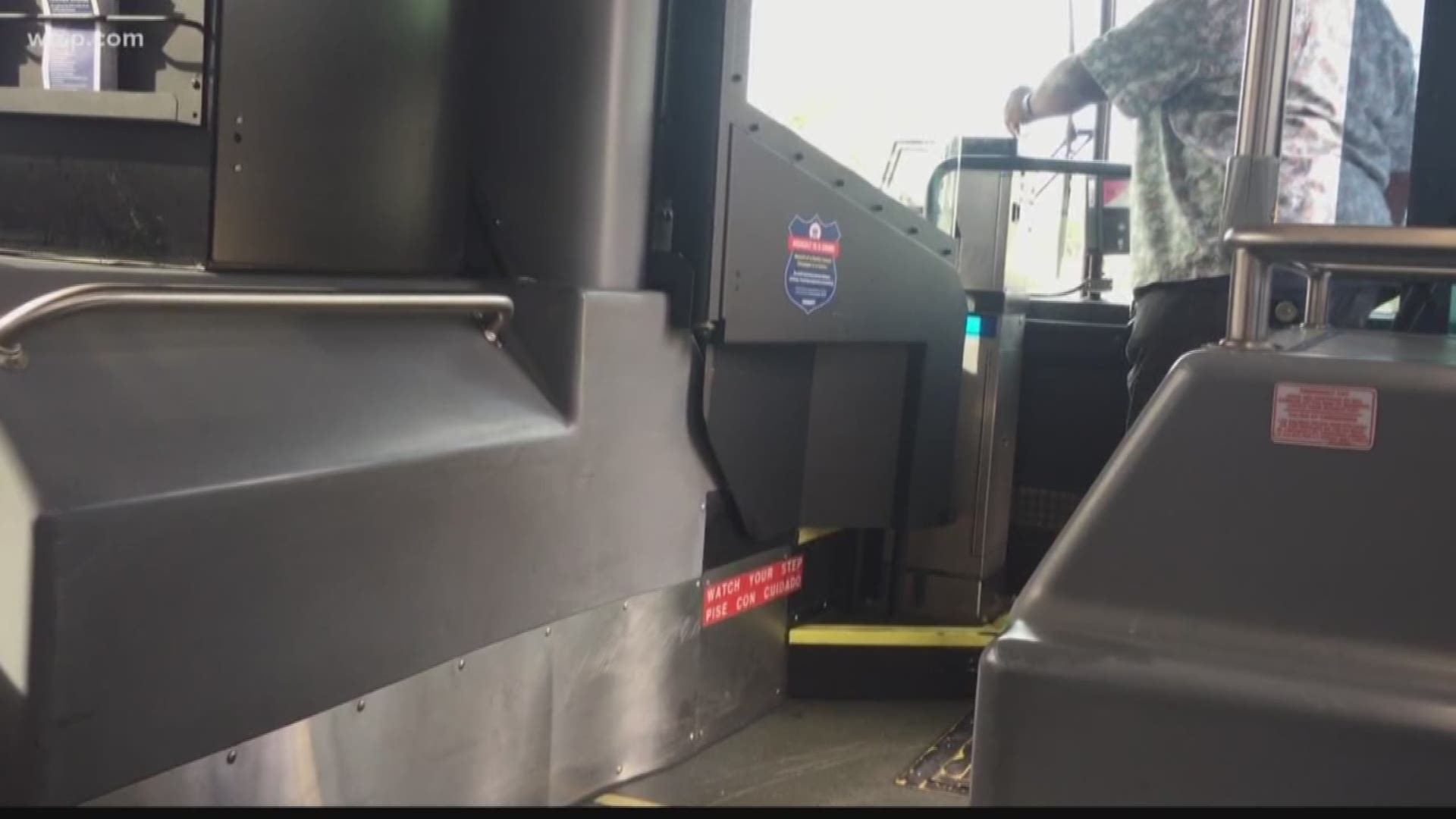 You may have heard about the two drivers attacked with knives in Hillsborough County.

But here’s what you probably didn’t hear about: The other 24 HART bus drivers physically attacked in the past three years.

10Investigates read handwritten reports from nearly 500 bus drivers between 2017 and 2019 who wrote that passengers physically or verbally abused them.

Credit: 10News WTSP
HART records of physical and verbal attacks on drivers from 2017-2019

The records show bus operators’ jobs are quickly getting more dangerous, and HART could be doing more to protect them.

“I said, ‘Sir, you need to sit down.’ So, he turned around and slapped me on my face,” HART driver Vera Johnson told 10Investigates. “The bus was moving on I-4.”

Johnson kept her cool; she didn’t lose control of that massive bus on I-4.

Lives are on the line inside the bus and out.

You share the roads with bus drivers. More and more often in Hillsborough County, they’re under attack behind the wheel.

“There are a lot of people that don’t feel safe. They just don’t say nothing anymore because we ain’t getting nowhere,” said Johnson. “What am I supposed to do? I’ve got to go to work. I got bills. What else?”

Attacks on HART bus drivers spiked in 2019 -- a year when attacks at all the other transit providers 10Investigates checked went down.

We looked through records of physical and verbal attacks from Citrus Connection in Polk County, Pinellas Suncoast Transit Authority, Sarasota County Area Transit, and Lynx in Central Florida for 2017 through 2019.

All of those transit providers had a decrease in attacks in 2019.

But at HART, 10Investigates found the opposite trend.

Sixteen HART drivers were physically attacked in 2019, a 220 percent increase.

HART drivers reported five physical attacks in both 2018 and 2017.

That means more HART drivers were attacked in 2019 than in the previous two years combined.

Verbal attacks like death threats and racial slurs shot up too, by 56 percent.

According to Lynx in Central Florida’s records, it had twice the ridership of HART in 2019, but only half as many physical attacks on drivers.

Amalgamated Transit Union organizer and Lynx driver Ismael Rivera said he didn’t know how severe HART’s problem was until 10Investigates told him about our data.

“I’m just shocked,” said Rivera. “I didn’t think it was this high.”

10Investigates brought the data to HART Director of Safety and Security Colin Mulloy.

“Well, one of the things is HART provides nearly 13 million trips every year. So, the vast, vast majority of those trips, we have great customers. We have great bus operators,” said Mulloy.

10Investigates pointed out to Mulloy that HART’s ridership did not increase during that time, so it wasn’t much of an explanation of why attacks on drivers spiked in 2019.

“Our biggest increase we’ve seen have been these verbal altercations,” responded Mulloy.

10Investigates told Mulloy that HART had a more significant increase in physical attacks than verbal and asked if HART knew what was behind the trend.

“What I’m saying is HART takes all of these situations very seriously. And the transit industry as well as social services, it’s one of the things that they’re dealing with,” said Mulloy.

After Dunn was killed in May 2019, HART spent more than $1 million to add protective shields to its fleet.

Signs on the shields warn passengers that assaulting a driver is a crime.

HART upgraded its surveillance camera systems, armed the security guards at transit stations, and had its drivers do de-escalation training with Hillsborough County Sheriff’s Office.

To cut down on confrontations about money, drivers got a message from HART in December telling them, “Please do not challenge fares. If a patron underpays, does not have a discount card or does not pay the fare at all, **let them ride**.”

Credit: 10News WTSP
HART instructed its drivers not to challenge fares, even if riders don't pay at all.

HART is also pushing a Florida bill that would increase the penalty for attacking a bus driver from a misdemeanor to a felony.

“This pattern of violent attacks on our transportation buses has got to end. And that’s what this bill is all about,” said Tampa Republican Sen. Michael Beltran on Jan. 21 during a Tallahassee news conference organized by HART.

All the other safety measures in the bill are things HART is already doing, like adding shields and de-escalation training.

Mulloy was in Tallahassee, in early February, supporting the bill.

10Investigates asked Mulloy how he expects the bill will reduce attacks if it doesn’t require HART to make changes.

“Well, we’re moving forward with additional items, too, so the mental health component is one thing that I can tell you that our agency is looking at,” said Mulloy.

There are bigger changes that HART hasn’t made yet.

A year-and-a-half after a Polk County bus operator was punched in the face, Citrus Connection is now allowing drivers to carry pepper spray.

A national ATU spokesperson told 10Investigates he doesn’t know of any other transit providers in the country that allow drivers to carry weapons.

“I don’t mind being first if it’s the right thing. And I believe this, indeed, is the right thing for our drivers and for our citizens,” said Citrus Connection Board Chair John Hall.

10Investigates asked Hall if he’s worried about the risks, like a driver misfiring or pepper spray permeating the entire bus.

“Well, of course with anything new, and especially with something like this, there could be risk. And would it permeate the bus? Probably. The bus would probably have to air out. The bottom line is, if everybody goes home that night, is the risk worth the reward?” said Hall.

There are no discussions yet at HART about allowing drivers there to carry pepper spray.

“I hope what happened to me never happens to any other person, any other drivers,” said HART driver Schnaider Prophete.

In November 2019, a passenger pepper sprayed him and slashed him with a box cutter again and again.

Another passenger saved his life.

That passenger, John Phelps, had strong words for the HART Board.

“I can’t protect everyone and it’s not the citizens’ job to protect your drivers. Like I said, it’s your job,” Phelps told the Board during its Dec. 1, 2019 meeting.

Prophete said he knows of HART drivers who already carry guns on the job, even though it’s against the rules.

“I would say at least 50 percent of drivers carry the means to protect themselves. And they don’t want to be a second Prophete or Mr. Dunn,” said Prophete. “You can always get another job. But you cannot get another life.”

Prophete is now working a desk job at HART.

He said he has not decided if he’ll get behind the wheel of a bus again.

Within HART’s records, 10Investigates found warnings from drivers and supervisors that relying on security guards and police aren’t always enough.

People who attack drivers often get away before officers arrive.

A 2017 report says a man “covered in dry blood” was threatening to kill a bus driver. A supervisor wrote, “TPD arrived 50 minutes after the 911 calls were made and when asked why so long? The answer was ‘we have been busy.’ If the guy comes back just call us.”

10Investigates asked Mulloy if it’s time to have armed security on the buses.

“We conducted a pilot on that,” said Mulloy. “Over the holidays in December, we had security guards on a number of our buses that have some of the higher incidents. So, we’re looking at that, we’re evaluating.”

While HART explores its next move, drivers get behind the wheel every day and hope passengers stay behind the yellow line.

It came up during Mulloy’s monthly safety briefing at the HART Safety and Operations Committee meeting on Feb. 17.

Mulloy said the “safety blitz” will involve handing out flyers with safety info to passengers at transit centers, giving safety awards to employees, and meeting with maintenance employees about safety and security.

After five interview requests, 10Investigates went up to HART Interim CEO Carolyn House Stewart after the Feb. 17 committee meeting. We asked about the increase in attacks on bus drivers.

“We stand by our comments and what we said. I have no comments on your story,” she told 10Investigates reporter Jenna Bourne.