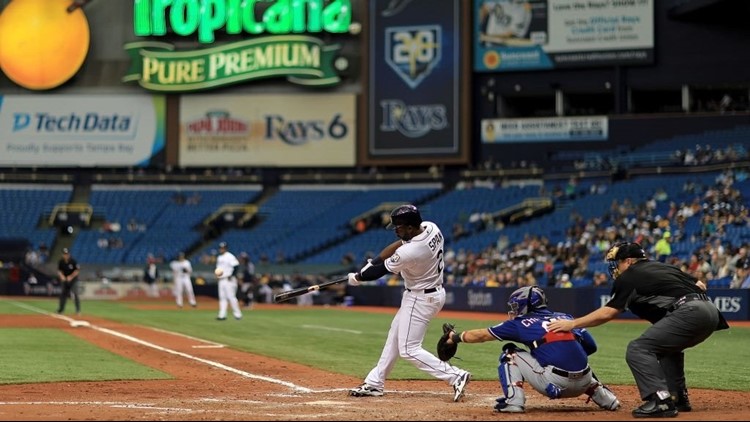 Photo by: Mike Ehrmann/Getty Images
Denard Span #2 of the Tampa Bay Rays hits an RBI double in the eighth inning during a game against the Texas Rangers at Tropicana Field on April 18, 2018 in St Petersburg, Florida.

Hillsborough County: Still no progress on how to pay for Rays stadium in Tampa

TAMPA, Fla. – With only nine months to figure out funding on a Rays stadium, Hillsborough County still has an extremely long way to go, according to recent comments made by county administrator Mike Merrill to the Tampa Bay Times.

The Times reported Friday the county planned on making developers shoulder the bulk of stadium construction costs, but that negotiations with developers are not yet underway. That leaves countless unanswered questions about how the cash-strapped county will pay for a new $800 million stadium in Ybor City that the Rays have, so far, only offered to contribute $150 million toward.

Merrill also added one source of public funding, increased property taxes collected in the immediate vicinity of a new stadium (also known as TIF/CRA funds), “would only be spent on street, sewer and other infrastructure improvements needed before construction could start."

That could take revenues, frequently cited by stadium proponents as a key to financing stadium construction, off the table.

RELATED: 14 different ways the public could pay for a new Rays stadium

The Rays have until January 2019 to cut a deal in Tampa before their window to negotiate out of their St. Petersburg contract closes.

If Hillsborough County was able to find private developers willing to donate hundreds of millions of dollars toward stadium construction, it would be unprecedented.

Economists have told 10Investigates revenues from development near a stadium are seldom significant enough to warrant significant investment in ballpark construction costs.

Even though Merrill told the Times the county has not yet begun negotiating with developers, 10Investigates exposed text messages from County Commissioner Ken Hagan, detailing negotiations over land prices for developer-owned land in Ybor City last year. Hagan then received a series of seven $1,000 campaign donations from companies and family members connected to developer Darryl Shaw.

Compared to Pinellas County, which has just one pro stadium and robust bed taxes thanks to its beaches, Hillsborough County has few available bed tax dollars for a fourth stadium. And many other potential stadium-funding revenue streams could help pay for other projects.

For years, Hagan and Buckhorn said discussions about a new stadium had to remain secret because of concerns about land acquisition. But after Hagan announced last October that land had been secured for a 14-acre stadium site in Ybor City, discussions with the team – and about how a stadium would be funded – remained secret.

The Tampa Bay Rays have not provided any recent comments to 10Investigates regarding stadium funding and they did not provide any comments for the Times article. In 2014, team president Brian Auld told 10Investigates the Rays would be “as open as we can” through their stadium campaign.

A lack of transparency has proven costly for taxpayers in other Major League Baseball cities, such as Atlanta and Miami.

In a recent Wall Street Journal story about the team's attendance struggles, team president Matt Silverman suggested elected and business leaders would have to step up, since "this new stadium effort is a fresh opportunity for the community to show that it values a baseball team."

The appetite for public subsidies could change with the success of “Tampa Bay Rays 2020,” a group led by a pair of Tampa businessmen, aimed at building support for a new stadium in Ybor City. 10Investigates revealed how the Rays had quietly provided a large chunk of funding for the group, but the team won’t say how much.

The Rays have until the end of 2018 to finalize plans – and funding – for a Tampa stadium before the expiration of their agreement with St. Petersburg. The deal, struck in January 2016, granted the Rays a three-year window to negotiate a stadium deal with Tampa – currently the only way the team can get out of its contract with St. Petersburg prior to 2027.

When asked at the time how a new stadium would be financed, team owner Stu Sternberg said, “I have no expectations at this point.”

RELATED: Rays spending on PR, but not curb appeal

The Rays have finished last in MLB attendance for six straight seasons, frequently citing location and corporate support as the main factor.10News has also identified other challenges facing the team, such as transit, technology and demographics.