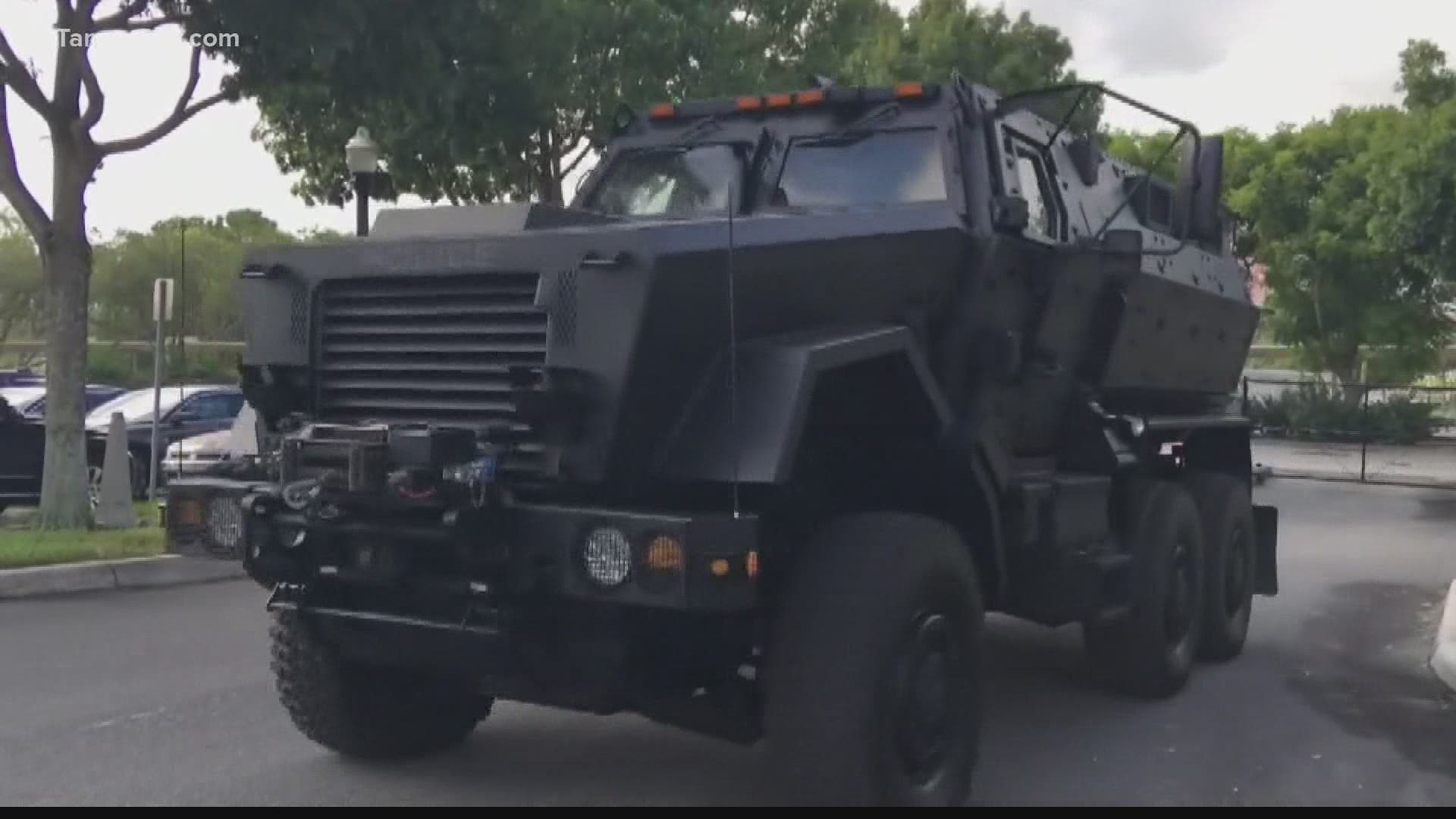 TAMPA, Fla — It’s been nearly three months since the death of George Floyd.

His death sparked outrage nationwide and started a conversation that continues today about police and the relationships they have with people in their communities.

Some community advocates say it doesn’t help that some local police departments look more like militaries headed to a war zone than public defenders protecting our neighborhoods.

A badge, a gun, a patrol car...typical inventory for law enforcement. But, 10 Investigates discovered military equipment in many Tampa Bay area departments.

“We do we have an M wrap and then we have one that's called a UTV," explained Highlands County Sheriff Paul Blackman to 10 Investigates' Jennifer Titus.

An MRAP, also known as a "Mine-Resistant Ambush Protected" vehicle by the U.S. military, is built to withstand improvised explosive devices and ambushes on the battlefield.

You can also add more than 130 rifles and a military utility truck to the Highlands County Sheriff's Office's inventory list, binging the total of its Department of Defense equipment to $1.3 million.

“It's really saved taxpayers a lot of money when it comes to how much we can purchase from the 1033 program,” explained Sheriff Blackman.

The 1033 program is a federal program that provides used equipment from the Department of Defense to federal, state, and local law enforcement agencies for free.

In the Tampa Bay area alone, $13.9 million dollars of equipment has been given to local law enforcement agencies, according to data 10 Investigates obtained from the Department of Defense.

“Law enforcement are meant to be peacekeepers. We're not supposed to be soldiers.”

Retired Police Lieutenant Diane Goldstein says there is a place for military-style equipment, but it should only be given to agencies that truly have a need for it.

“It's federal money, incentivizing a culture that then adopts military-style posturing that doesn't serve the community well,” Goldstein explained to 10 Investigates.

One of the bigger agencies in the Bay Area, the Saint Pete Police Department, only has one piece of equipment from the program, a military truck that is used as a rescue vehicle.

“We can put people in that and take them out of the flooded area,” explained Chief Holloway.

Chief Holloway says he doesn’t plan on getting any other equipment.

When asked why Highlands County would need a vehicle that is protected from mine blasts, Sheriff Blackman says it's all about safety for his deputies.

"We don't have a lot of miles around here that we need to drive over. But we do use it because of its ability to be bulletproof and be able to take some pretty significant rounds," explained Sheriff Blackman.

In fact, there are dents in their armored truck from a standoff a few weeks back. The truck was also seen pulling up to the bank in Sebring where five people were shot and killed.

“I certainly don't want any of my members to get injured. And so, it's a lifesaver for us. And if we ever come into a situation where we have to get a victim out of a place, I'm sure they're going to be thankful that we have an armored vehicle to put them in as opposed to just make it run across the field or something.”

This program is not new. It was put in place by Congress in the 90s.

Let's take a deeper dive into its history:

Want to know what your local law enforcement agency has from the 1033 Program? You can see that by clicking here.