Beyond Band of Brothers Tours declared bankruptcy and the Florida Attorney General’s office is now reviewing at least 20 complaints. 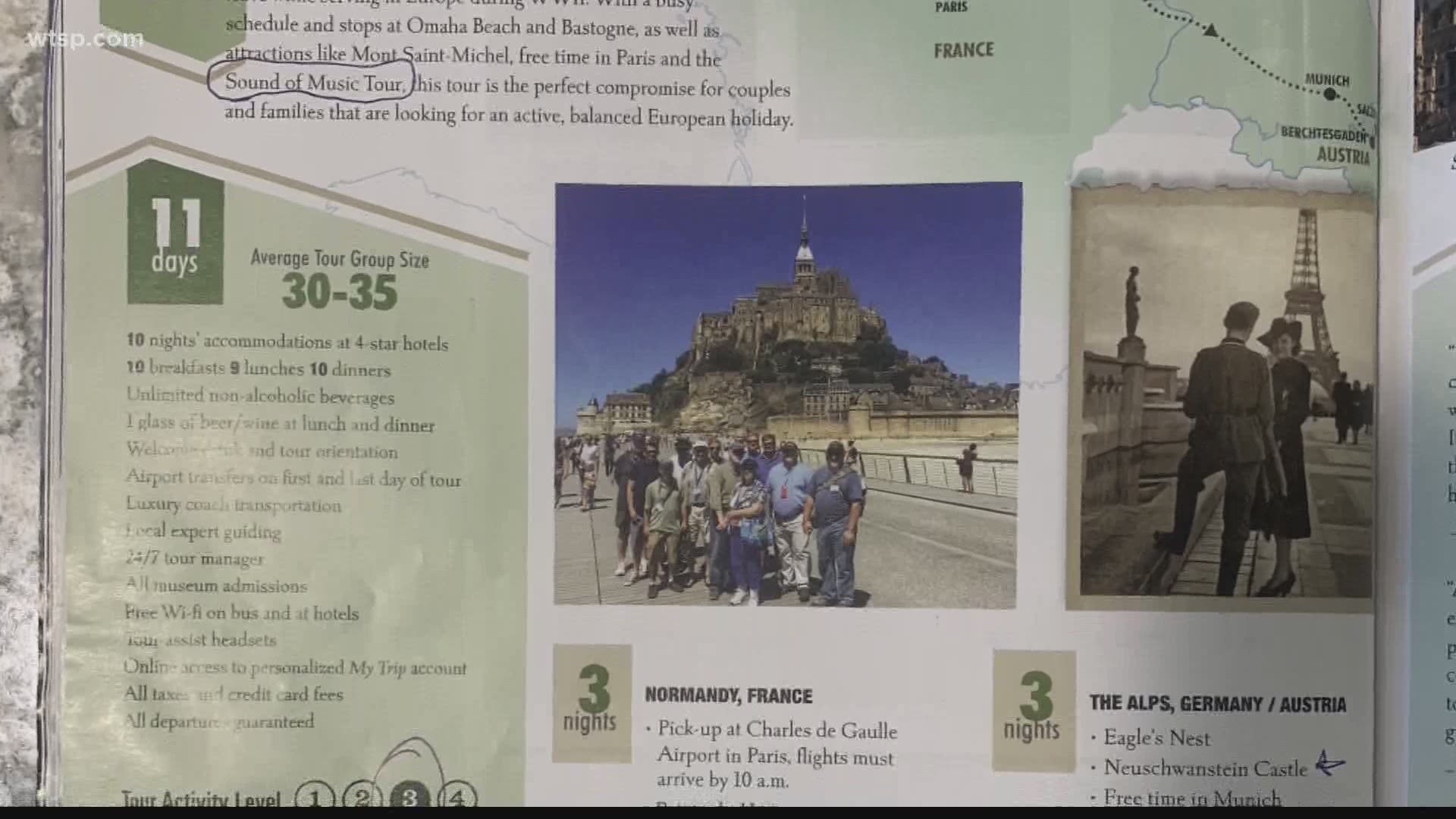 TAMPA, Fla. — UPDATE:
Bill and Jane Reimers said on Thursday, June 11, they received full reimbursement from American Express. They paid $10,694 to Beyond Band of Brothers for the tour they were supposed to go on in late June.

Other families have also filed disputes with credit card companies and are hoping for a similar resolution. Lee and Nan Habjan say they’re still waiting on their bank.

Thousands of people, many of whom are veterans, are out thousands of dollars after a Tampa based company providing World War II themed tours declared bankruptcy and vanished.

Several families reached out to 10 Investigates’ Courtney Robinson trying to find out what they can do to get back their money back and what steps they need to take to protect themselves.

“I think my daughter calls it part of the bucket list,” said Lee Habjan.

Habjan is a Marine Corps. veteran.  At almost 83 years old, he’s been on an honor flight to Washington, D.C., and taken a trip to the National Museum of the Marine Corps. to find his engraved brick.

His next adventure was planned for September 2020.  He and his family would take an 11-day trip to Europe.

He and his wife paid $9,900 last December. In April, they found out the trip would not happen. The company, Beyond Band of Brothers Tours, had declared bankruptcy.

The Habjans and their family were not alone.

“It was the trip of a lifetime, really,” said Bill Reimers.

The Air Force veteran and his wife also planned to spend 11-days in Europe. They booked it in early 2019, had set aside money and were supposed to leave in late June.

“And how much did you guys pay for the trip?” asked 10 Investigates’ Courtney Robinson.

In March, they started to worry about the status given the global coronavirus pandemic.  Bill says he tried to get onto the website, but it was gone.  He emailed and those emails bounced back.  Then Jane found the Facebook group: “Beyond Band of Brothers Tours DISHONEST.”  It currently has 1,430 members.

“Where’s the money?  That’s the biggest burning question: who’s got the $12 million you collected from us?” she said.

“The unfortunate reality is people are going to get paid some percentage presumably of what they’ve put down but certainly not all of it,” she said.

She says the court appointed trustee will have to figure out if there are other assets.

“Has there been money transferred shortly before bankruptcy so they can bring that money back into the estate. Things like that.”

10 Investigates’ Courtney Robinson called and emailed the attorney representing the company but did not receive a call back from him.  The bankruptcy trustee told her he had just been assigned the case, did not have time to speak and to reach back out in 30 days.

“When they’re that much in debt, this didn’t just happen overnight because of the pandemic, as far as I’m concerned,” said Nan Habjan.

Lee says he found the trip advertised in a well-respected publication for veterans.

Each of these families is working with credit card companies and have filed disputes. They’re hopeful they’ll get their money back in that way.

The Florida Attorney General’s Office told 10 Investigates that they aware of this company and are reviewing consumer complaints.  As of May 14, 2020, they had received 20 complaints.

Radwan also offered advice for others who might find themselves dealing with a company that owes them money but has declared bankruptcy.

She says first, make sure you have your documents together to show what you paid.

Radwan also says pay attention to court orders.  In this case, the federal court issued an Order of Relief and put a stay on all attempts to collect.