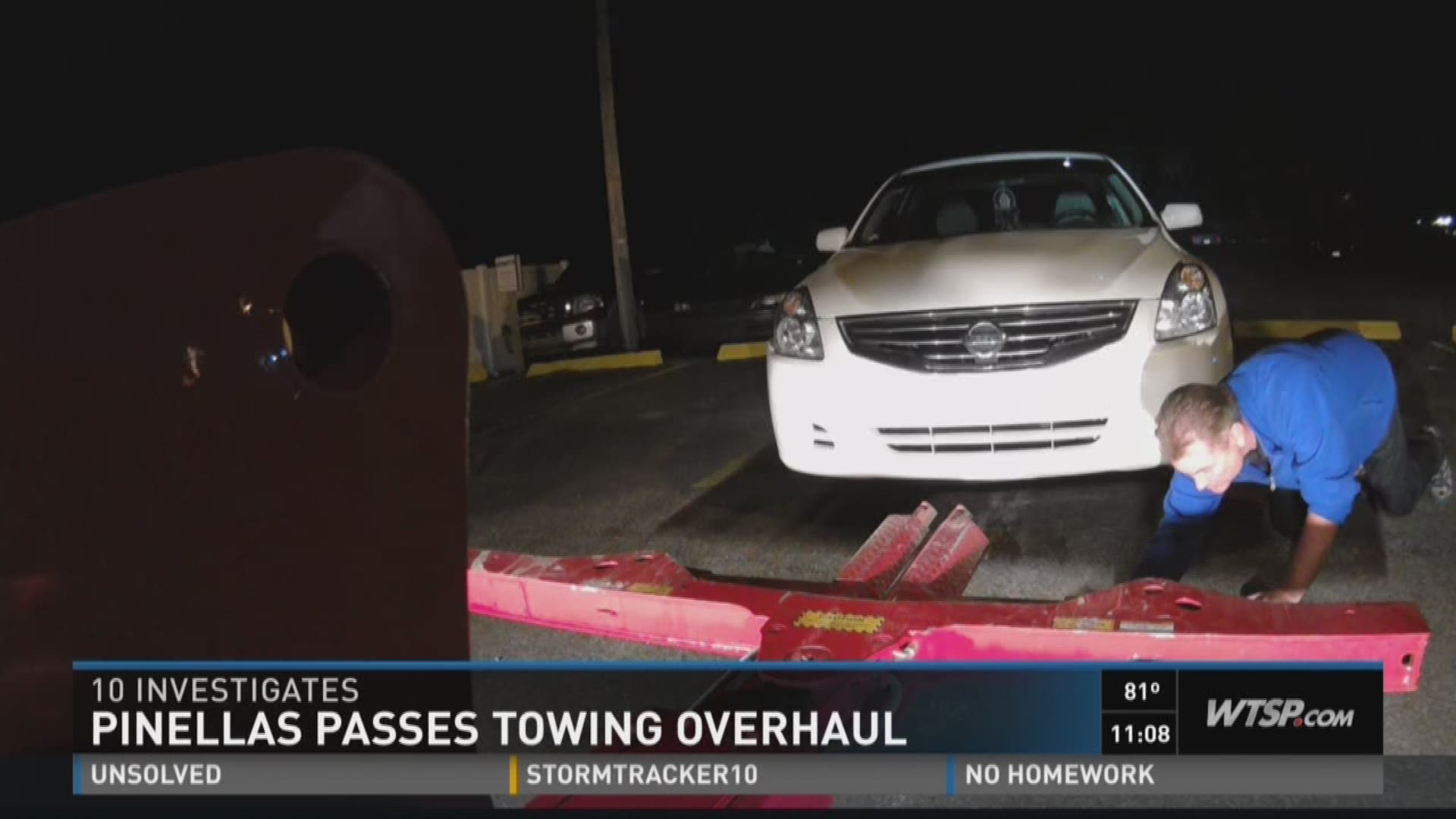 Among the protections in the approved ordinance, which will take effect on Oct. 1 countywide, including within each of the county's 24 municipalities, is a measure to prohibit tow trucks from patrolling bar and restaurant parking lots overnight. It mimics a City of Tampa ordinance that's been in place since 2008.

"Concern over being towed may act to discourage intoxicated consumers from seeking alternative transportation, and places consumers in position to make a difficult choice," according to an analysis by county staff. "This change helps to protect consumers and our streets while still affording an avenue for necessary tows."

"The most important part really is that people feel like they can leave their cars at bars and not drive under the influence," said Commission Chair Charlie Justice. "It’s not about money; it’s about public safety. (If) we take one drunk driver off the road that would’ve caused an accident or a death, that’s an easy step to do to prevent that from happening."

A pair of representatives from local tow truck companies spoke on the ordinance; one in support, and one in opposition.

"I commend the proposed ordinance," said Calvin Hudson, president of CommTow, one of the area's largest nonconsensual towing companies. "But I share a few concerns."

Hudson spoke of the costs his company incurs to photograph and videotape every impound that is requested by private property owners. And he urged commissioners to update the county's fee schedule for wreckers, which hasn't been changed in 16 years.

Commissioners agreed to update their fee schedule in the near future.

Pinellas County's ordinance will also require wrecker companies to accept debit card and credit card payments from drivers who have been towed, alleviating one of the biggest consumer complaints regarding demands for cash. The City of St. Petersburg passed a similar ordinance in 2015.

"Currently, under cash only scenarios," wrote county staff in the official analysis, "vehicle owners face potential hardship and safety concerns when seeking sufficient cash to retrieve their vehicle. The proposed changes require tow operators to accept credit or debit cards for payment to remove this critical barrier when retrieving a towed vehicle. Additionally, proposed changes prohibit a fee for accessing unattached items within the vehicle during operating hours and require the fee to be posted for non-operating hours."

An representative of several local tow companies said credit card payments would put an undue burden on credit card companies if upset consumers could simply cancel their charges, even if they deserved to get towed. He recommended requiring wrecker companies to accept credit card or debit card payments. But commissioners appeared unmoved and kept the credit card requirement in the proposal.

Commission Chairman Charlie Justice said the county would also step up its education efforts on towing rules. 10Investigates showed in May that not only were many wrecker companies ignoring local laws, but the county hadn't done a lot to enforce the rules either. Many consumers didn't know to file complaints with the Pinellas County Consumer Protection office.

4/13/16: Another case of predatory towing in Tampa

3/17/16: Tampa to crack down on predatory towing outside bars

2/9/16: EDITORIAL: Other cities should copy Tampa

1/25/16: Confronting predatory towing & how to get a refund if you're towed illegally