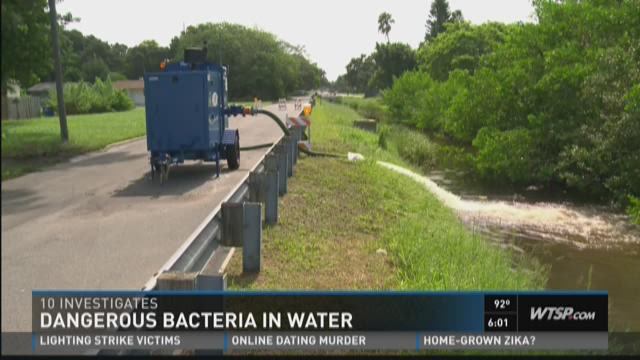 While the new study by USF researchers is raising major concerns over raw sewage from a sewer break in 2014, researchers say the breaks that occurred last year and this year are just as dangerous.

With the 2014 Pinellas County sewer break, Harwood and her team looked at 500,000 gallons of raw sewage poured into St. Petersburg. They found it caused a potential threat to public health because antibiotic-resistant bacteria, Vancomycin Resistant Enterococci, or VRE, was in the spill.

According to Harwood, “They can be transferred from one bacterium to another -- even across species -- and that is where the bug concern comes in."

Harwood says kids, older people and anyone who is immune-compromised are most at risk.

State Rep. Kathleen Peters puts the blame squarely on the city of St. Petersburg. Earlier this summer, Peters told us, “I have grave concerns that they have not expanded the infrastructure to keep up with he growth and development of Pinellas County.”

Peters expressed her concern to the Florida Department of Environmental Regulations in a letter saying, “Perceived inaction on the issue has made for a potential environmental and health disaster.”

And that is why homeowner Cindy Davis says she felt compelled to sue the city of St. Petersburg. “It's wrong for any municipality or person to pour toxins into a water body,” she said.

The city of St Petersburg has had several raw sewage overflows throughout the years and now there is an antibiotic-resistant bacterium that can be transferred to an even more dangerous bacterium.

“That’s where we microbiologists look ahead and say this is the potential for the most at-risk,” Harwood says.

Pinellas County says since the 2014 sewer break and raw sewage spill, it has started a project to install a backup pipeline in case there is ever another spill. That project will be done in 2019.

The city of St. Petersburg says the USF study was done about a problem with a county sewer break and the City was not to blame.