Several hundred people rallied for "more than thoughts and prayers" in St. Petersburg on Saturday following the school shooting in Parkland that left 17 people dead. 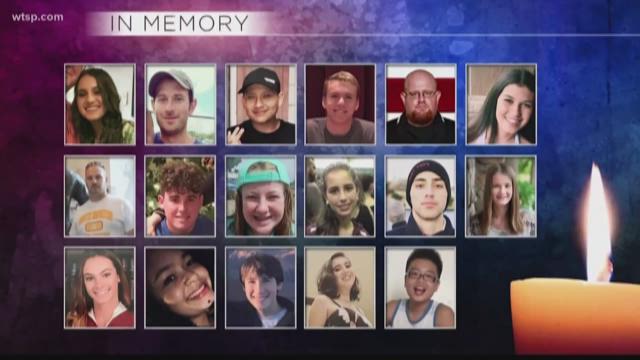 ST. PETERSBURG, Fla. – A bill that would arm trained volunteers or school employees inside the state's public schools has been withdrawn from consideration by a Senate committee.

Sen. Dennis Baxley, R-Ocala, authored SB 1236 in Dec. Before Wednesday's shooting that left 17 people dead at Marjory Stoneman Douglas High School in Parkland, the proposal had not been scheduled for consideration by any of the three committees to which it had been assigned.

The bill, which would have allowed a principal to designate someone to carry firearms on public school campuses, was scheduled to be heard Tuesday but was pulled late Friday night.

Sen. Greg Steube, the committee chairman, issued the decision after several top senators said they were opposed to considering the bill.

"More guns is not the solution to gun violence," said Jan Neuberger, a member of the Moms Demand Action St. Petersburg chapter.

Lisa Perry, a member of the local Women's March chapter, said the rally was about demanding more than just "thoughts and prayers" from elected officials.

"We’re watching children become victims while they’re just trying to go to school," Perry said. "We want to come together and have a place to heal, support the victims, but also we’re not just going to go home until we follow up with some meaningful action.”

Lawmakers in attendance, including U.S. Rep. Charlie Crist, D-St. Petersburg, called for a ban on assault rifles, bump stocks and for stricter background checks when purchasing a gun.

Aida Mackic, a mother of three, became emotional as she described an instance where her young son asked how a shooting like the one in Parkland could happen in a space he thought was safe.

"There are no words, we have failed our children," Mackic said. "What have we as parents done to provide these safe spaces? Shame on us, shame on us as a community to allow this to continue."

Florida Carry, which advocates for the rights of gun owners statewide, backed the proposal to allow teachers to carry guns in classrooms. The group also wants the Florida Legislature to eliminate "gun-free zones" across the state, according to our reporting partners at the Tampa Bay Times.

The shooting at Marjory Stoneman Douglas High School in Parkland has revived an ongoing legislative debate about how to respond to gun violence.

Democrats want the Legislature to take up gun control bills that have languished again this year, but Republican legislative leaders are talking about boosting mental health programs in Florida's public schools as well considering measures that would bolster safety on school campuses.

Gov. Rick Scott has said he plans to talk to legislative leaders in the coming week about what could be done to make it harder for people who are mentally ill to purchase a gun.