Be prepared in 'soft target' areas

In the wake of the nightclub shooting, soft targets are implementing more security forces across the country. 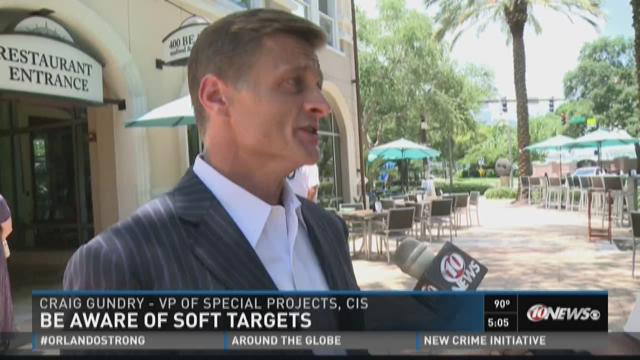 In the wake of the Pulse nightclub shooting in Orlando, soft targets are implementing more security forces across the country.

A "soft target" is a public place where groups of people can gather and that have little to no security. According to terrorist-related security expert Craig Gundry, the top three most common soft target areas are restaurants, movie theaters and museums.

"It kind of begins when you enter the restaurant," says Gundry. "First of all, most of these attacks we've seen for example the 13th of November attacks were executed outdoors, quite often at tables that are sitting outdoors. They are the most likely target.

"Also remember that response in these kinds of attacks are the same in most circumstances. If an escape option exists, use that as the first option. Get away from the area. If we are indoors and can't get out the front, that means going to the back. Just whatever you do, don't go to the restroom. That's usually going to be a dead end and can't be secured in most cases. Go through the kitchen, out the back door, something like that.

Click here to read about the 49 Orlando shooting victims

" In movies theaters you have more limited options as far as escapes are concerned. In most movie theaters there are only one or two doors that lead to the outside. But, the same rules are consistent there, too. If you have the option to escape, that will be the best option. Usually there is not a barricade option at the movie theater, so that would not be an alternative.

"And, in a worst case scenario, if you were to be confronted face to face with a gunman, it is better to take offensive action. Try to defend yourself, or resist, rather than do nothing. This is one of the most common problems that we see with this kind of event. In many cases people don't think rationally when an attack is starting and they often don't consider the fact that resistance is an option as well. Unfortunately a lot of victims are killed in a passive manner," says Gundry.

Gundry goes on to say malls and churches are also soft target areas. He stresses being prepared is the most important thing you can do anytime you enter one of these areas.