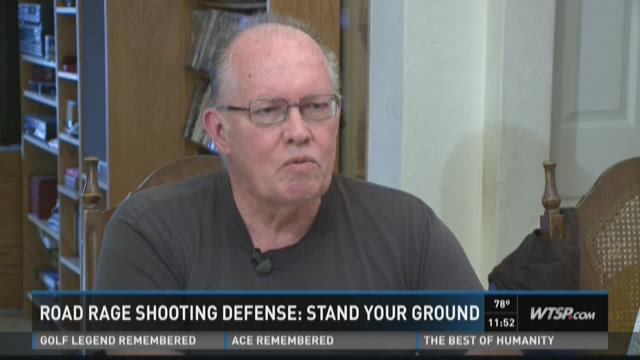 A St. Petersburg father is fighting for justice for his son.

Ben Franklin says the Stand Your Ground law is letting a once-accused killer off the hook.

“This guy rolls down his back window, sticks a gun out, and shoots him, so how was that stand your ground,” wonders Franklin.

If you fear for your life in your home or your car, in many cases you can defend yourself under Florida's Stand Your Ground law.

Franklin has learned that because of the law, the shooter who killed his son during a road rage fight will not face any charges.

Franklin tells 10News WTSP that his 41-year-old son, Scott, should have never gotten out of the car on the way home from work at the intersection of 5th Ave. S. and 6th St. S., near All Children's Hospital in St. Petersburg to confront a driver who cut him off. The decision cost the father of two his life.

“He made the mistake of getting out of his car, but not a mistake you should die for,” Franklin says.

Police records show Scott Franklin started swearing and acting aggressively towards the other car in a fit of road rage. Franklin’s father insists his son had been exchanging words with the other driver, when the backseat passenger of that car, Malcolm DiPina rolled down the window and opened fire on Franklin.

“He shot five times, and then he says, ‘Oh, I didn't mean to kill him,’” says Franklin.

DiPina claims to investigators that "he was unsure of the victim's intentions and was in fear.” Police say shots rang out, the car took off, and the group headed to Hard Rock Casino leaving Franklin to die.

Dipina turned himself in the next day and was initially charged with manslaughter.

Franklin has been waiting for justice, only to learn from the State Attorney's Office that they dropped the charge, Franklin is told that it's based on Florida's Stand Your Ground law.

“It was unbelievable someone could roll down the back window of a car, stick a gun out, and shoot you and not be charged with anything, not even lying during the investigation or leaving the scene of a homicide,” Franklin says.

“I can't see any way that could be under Stand Your Ground. My son wasn't attacking him. He was shot so far away there wasn't any powder burns or stippling. It wasn't a close shot, so what was he afraid of,” wonders Franklin.

Franklin says his son did not have a gun.

Franklin has hired a private investigator and vows to find new evidence to make sure someone's punished for his son's death.

There's also a link to the family's GoFundMe account to help with the private investigation:

Other road rage cases that have used the stand your ground law:

Man killed in front of family after road rage