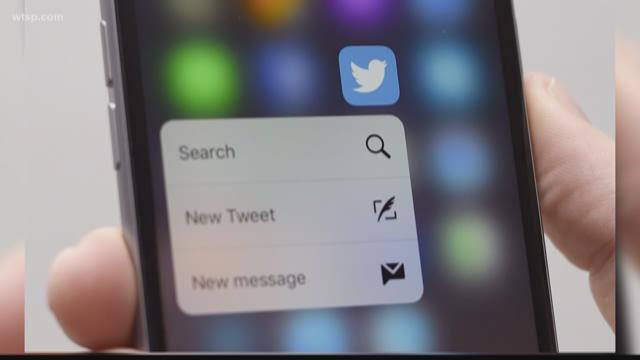 ST. PETERSBURG, Fla. -- Earlier this week, Twitter started removing accounts that use or promote violence against people to further their causes.

So, do you have a constitutional right to free speech on social media? Or are they private companies that have the right - maybe even the obligation - to control content?

There’s no question that in the public square you have a First Amendment, constitutional right to say just about anything you want.

But these days, people have a school of thought that those same rights extend to their social media accounts, such as Twitter and Facebook.

“Well, even in the public park, there are certain things you can change and cannot say,” acknowledged Facebook user Michele Ervin.

But Monika Sheppard disagrees. “It’s a private company, but a public place in a public forum,” she said, “Because it’s out there for everybody.”

We put the legal question of whether your social media page is a platform for protected free speech to Louis Virelli, a constitutional law professor at Stetson University College of Law.

“American conversations about free speech often don’t make that distinction. We say things like, 'I’ve got a right to free speech, so I can say whatever I want.' But that is only true and respect your government,” said Virelli. “You can always be removed from a private establishment for saying things that the owner doesn’t like.”

This week, white supremacist Jared Taylor filed suit against Twitter, which - also this week - started removing his and other accounts that allegedly promote violence.

Taylor’s lawyers say Twitter is an open public platform, equating it to a modern-day town square.

While the U.S. Supreme Court increasingly recognizes social media as an avenue for the free exchange of information and ideas, Virelli doesn’t think private companies are legally obligated to provide a platform.

“Twitter and Facebook are much more, as a legal matter, like Walmart,” said Virelli. “We are treating them, or we have adopted those platforms, as ways to communicate with one another, but they are for-profit entities who have the right to make those decisions and always have.”

Remember the public outrage after a man’s murder was broadcast on Facebook Live? Or the offensive false reports about student protesters after last week’s shooting in Parkland?

There’s also growing political pressure being placed on them to detect and remove fake political news.

Social media outlets also have legal immunity from content other people post. So, deciding to eliminate certain groups or topics is a business decision driven by customers and the corporation’s own ethical standards.

“As a matter of law,” said Virelli, “there’s not much to be said about people being excluded from Twitter or Facebook based on their viewpoints.

There’s lots to be said about it from a social standpoint.

Virelli says if social media outlets were turned into public utilities that would be different.

But for now they’re private companies, bound by laws when it comes to discrimination, he says, but not free speech.