A new system built into lifeguard stands is designed to stop a lightening strike from forming in order to protect first responders and beachgoers during a storm. 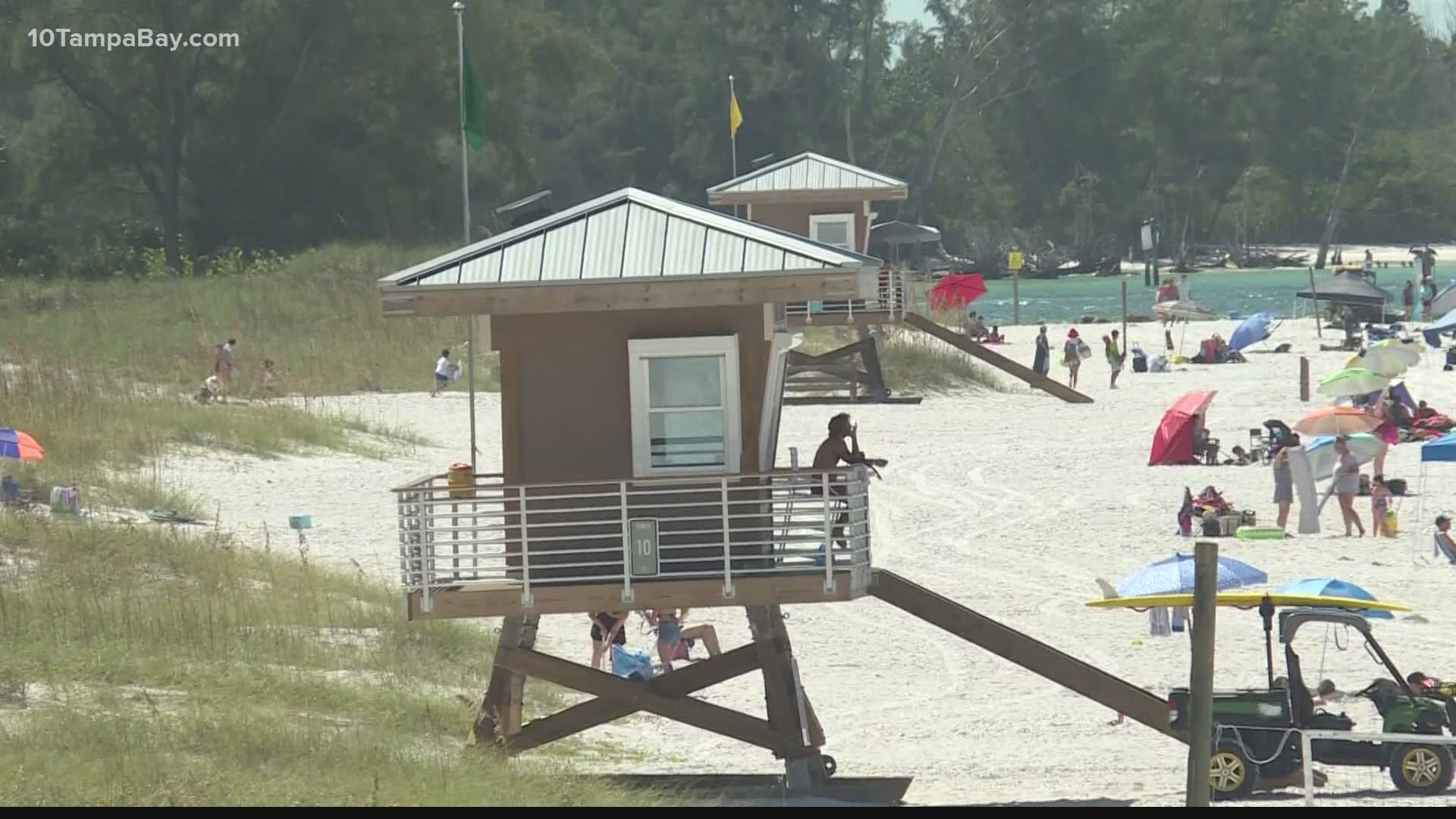 MANATEE COUNTY, Fla. — Manatee County has finished installing 11 new lifeguard stands on Coquina, Cortez and Holmes beaches. On those stands is a neat new piece of technology used to keep first responders from being struck by lightning when clearing the beach during a storm.

“We are very proactive when it comes to lightning,” said Joe Westerman, chief of Manatee County’s Beach Patrol.

Florida is the lightning capital of the U.S. In fact, there's so much activity in the Tampa Bay area, Florida State University researchers say you have a one in 3,000 chance over the course of your lifetime to get struck by lightning.

Being on the beach with few options for shelter makes you especially vulnerable. That’s why Manatee County has added a layer of protection.

They have installed electric field compensators on flagpoles next to their new lifeguard stands.

Westerman says there are nine portable lifeguard towers, which cost the county around $126,000. There are also two permanent towers standing three-stories tall, costing around $240,000.

This new tech uses deionization by absorbing positive and negative ions from the atmosphere creating an environment that suppresses lightning.

“So, you’ve got surface to ground lightning that happens and in between that is where those ionizations need a charge to make that contact from the cloud to the ground. What this does is it breaks that up, so it never lets it form,” Westerman said. “It prevents lightning from even striking.”

Making it safe for a lifeguard to stay in the lifeguard stand during a storm without fear of being struck by lightning.

“What it does is protect them inside that tower,” Westerman said. “It also allows us to stay further focused on that mission of public safety to be able to make sure that we are getting those people off the beaches as quickly as possible.”

Westerman says if there’s lightning at the beach, their first course of action is to clear the beach and get people safely back to their cars.

“Our policy is when we’ve got a lightning strike within six miles of our beach, we close it down for 30 minutes until after the last lightning strike and then we open it back up,” Westerman said.

Now in an emergency where beachgoers are not able to safely get to their cars, Westerman says they can take shelter under one of their lifeguards stands. People that are in the radius of the electric field compensators will be safe as well.

“I hate to trust technology that much to say that it will never happen, you just don’t know,” Westerman said. “But I think we’ve taken, in Manatee County, the best efforts to make sure that one, our first responders are protected, two, the structures that they work out of are protected, and in case of an emergency where people just can’t get off the beach, then there’s a possibility they can be protected where they are at, underneath one of our towers.”

Westerman says these systems are widely used across the nation, and the data collected on their effectiveness is undeniable.

“We were rather excited about this project and getting it in place,” Westerman said. “I know that since it’s been put in parks in Texas, it’s widely used all over the place with no failures.”

Making it a no brainer for the county to install on these lifeguard stands. He says since Manatee beaches installed these devices, there’s been a lot of talk around the state of Florida at other lifeguard agencies looking at installing the same system.

RELATED: Lightning safety: What you need to know