A deputy reported Gary Kompothecras, 57, said he didn't need to recite the alphabet because he has a PhD. 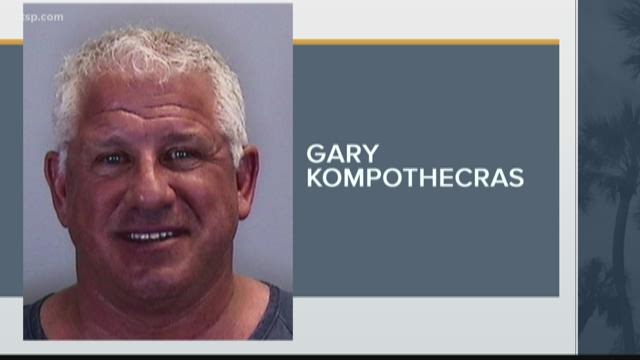 MANATEE COUNTY, Fla. -- Saying he didn't need to recite the alphabet because he had a PhD but failed when asked by a county deputy, the founder of 1-800-Ask-Gary was arrested for drunk driving, according to an arrest report.

Gary Kompothecras, 57, is in custody at the Manatee County Jail and is being held on a $500 bond.

1-800-Ask-Gary is a lawyer referral service that runs seemingly ubiquitous TV commercials about seeking help after a crash.

Following a stop, the deputy noted the smell of alcohol coming from the vehicle.

The deputy identified the driver as Kompothecras, who reportedly told the deputy he had wine at the Hard Rock Casino. He left after some sort of issue with his wife.

The wealthy Sarasota chiropractor agreed to field sobriety exercises but noted he had an issue with his feet that would affect his balance.

The arrest report says Kompothecras couldn't smoothly follow an exercise with his eyes. He, too, stepped off the line during a walking test and missed touching his heel to toe.

When asked to state the alphabet, Kompothecras replied he had a PhD and knew the alphabet, the report reads, but he could not complete it despite several attempts.

Kompothecras is the father of Alex Kompothecras, a cast member on MTV's "Siesta Key." The family's home is the site of much of the activity on the show.