One of the women called texts from the deputy, "unprofessional, creepy, and scary." 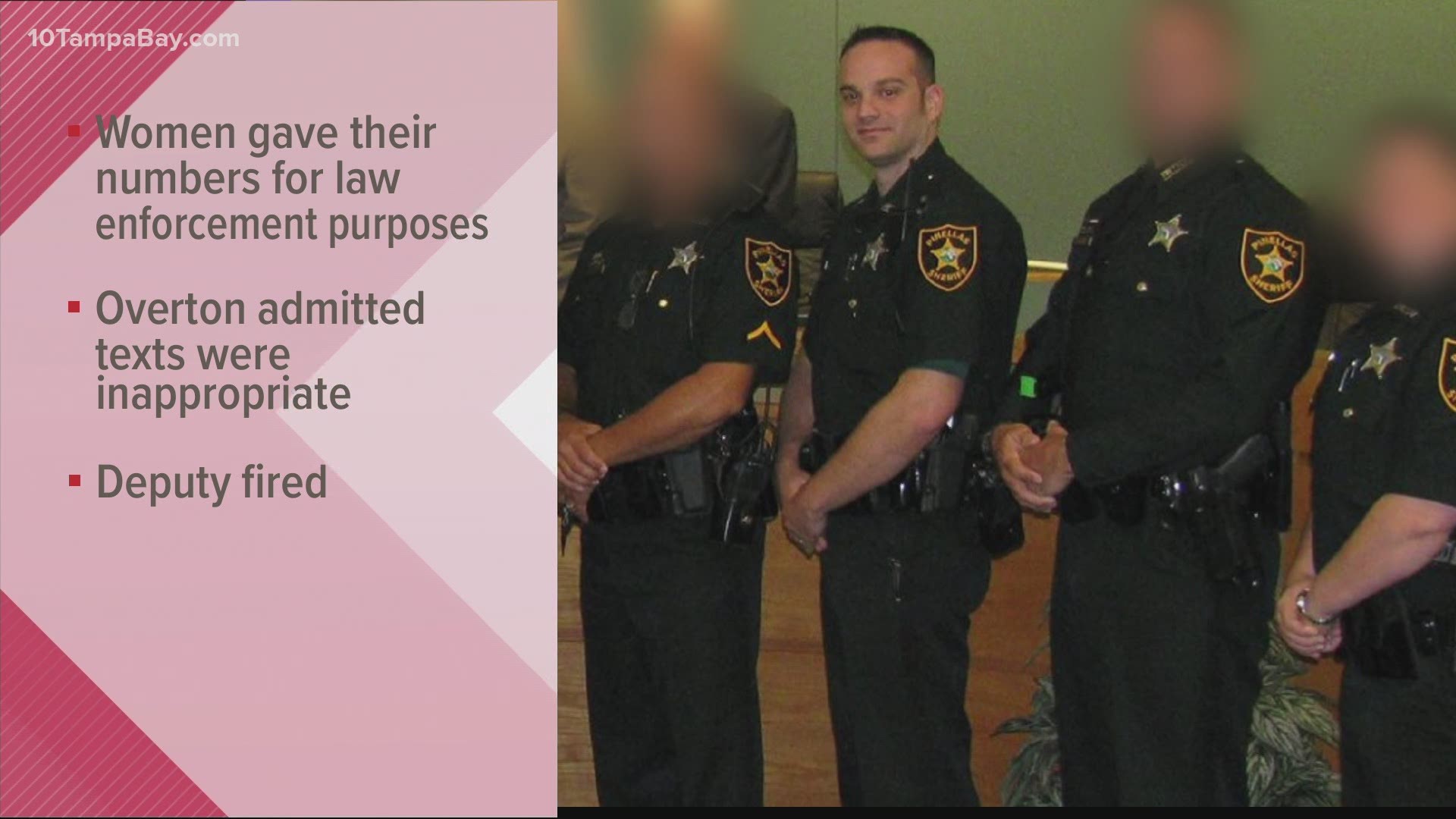 LARGO, Fla. — The Pinellas County Sheriff's Office fired a patrol deputy on Monday after two investigations revealed he was sending inappropriate text messages to vulnerable women he met on the job.

The sheriff's office says former deputy Brian Overton put his own personal wants ahead of the welfare of the people he was sworn to serve when he texted two women to have personal, sometimes sexual, conversations.

The first investigation into Overton's behavior was opened in July 2020, according to the sheriff's office.

An internal memo shows some of the text messages sent to the woman included "personal" photos, including one of Overton in his uniform.

Overton admitted to sending the messages and was issued a written reprimand in August 2020, according to a press release.

In February 2021, the sheriff's office said Overton used an app on his phone to disguise his personal phone number from another woman who contacted investigators to report suspected child abuse.

Investigators said, at first, Overton was texting the woman about the investigation, but then things turned sexual.

According to a sheriff’s office memo, Overton texted the woman, "Don't take this the wrong way but you have Thst (sic) attractive independent vibe, not a perfect body but def still sexy snd (sic) a very caring."

The Administrative Investigation Division’s report also included screenshots of messages that appear to show Overton telling that woman “Vasectomy (sic) are amazing” and “Look if you were single I’d be interested.”

The woman called the texts she received from Overton "unprofessional, creepy, and scary," according to the sheriff's office.

Investigators said the woman told them she felt like she was being sexually harassed but was scared to say anything because it could have impacted her case.

The sheriff's office says during the administrative interview, Overton admitted the text messages were "improper, did not serve a legitimate law enforcement purpose, and were not ethical." Investigators also said he acknowledged the texts were sent with the sole purpose of having a personal conversation and should not have been sent.

"Deputy Overton's conduct was reprehensible and instead of honoring his oath to help others, he tried to take advantage of women in vulnerable situations for self-serving sexual gratification. Overton's conduct is inconsistent with how a deputy sheriff should conduct himself and he has forfeited the privilege of being a law enforcement officer," Pinellas County Sheriff Bob Gualtieri said.

The sheriff's office says its Administrative Review Board found that Overton abused his position of power and "demonstrated a pattern of being unable to practice self-restraint." It also stated that Overton admitted to having given his agency business cards to women while on duty in hopes they would contact him.

During an interview with the sheriff’s office, Overton testified he never met up with, dated, or had a sexual relationship with any woman he met on duty.

Overton also testified he had texted other women he met on duty, “but none to this extent” with “the sexual mentality where it would be flirtatious to the point of somebody feeling uncomfortable,” according to sheriff’s office records.

During the sheriff’s office’s investigation into the sexual text messages, investigators said they uncovered Overton briefly communicated through a dating website with an undercover detective posing as a 15-year-old girl. Overton claimed he thought she was a college student, according to a transcript of his interview. This conversation does not appear to be related to his firing.

Overton first started his career with the St. Pete Beach Police Department in 2009. He was transferred to the Pinellas County Sheriff's Office in 2013 when it look over law enforcement services for the city.

Former Deputy Brian Overton offered his "apologies and sincerest regrets" in a statement:

“I am not here to make excuses. Through intensive counseling, use of critical incident stress management resources, and my faith, I have come to know and reckon with how my conduct impacted others. In texting with Mrs. [redacted] and, before that, by calling and texting with Mrs. [redacted], I was looking for affirmation. I understand that these women were strangers who I was supposed to protect and serve. At the time, I was just thinking about me. I did not think about how my conduct would impact them. I know now that I made them feel uncomfortable, and that I likely changed the way that they view and rely on law enforcement. For that, I offer my deepest apologies and sincerest regrets.”