A pit bull mix that attacked its owners after they tried to dress it in a sweater last week has been euthanized. 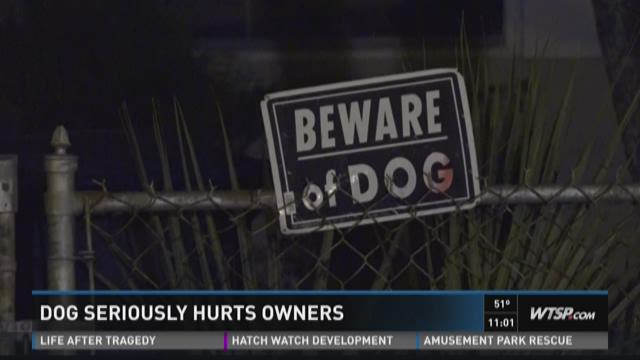 TAMPA, Fla. -- A pit bull mix that attacked its owners after they tried to dress it in a sweater last week has been euthanized.

Hillsborough County Animal Services says that Scarface due to stab wounds suffered when the's dog's owners tried to defend themselves.

On Dec. 30, the pit bulll mix was angered by an attempt to put a sweater on it attacked three family members, one seriously, in Tampa on Friday, police said.

Her husband, Ismael Guerrero, 46, attempted to pull the dog off his wife when the dog began attacking him. Antoine Harris, 22, also intervened, stabbing the dog in the head and neck.

The dog then began attacking Harris. All three were able to escape into the house, leaving the dog in the backyard.

Animal Control and police responded, and agency workers shot the dog with a tranquilizer gun. The dog got into the house, where two children were in the back room. At that point, TPD officers deployed a bean bag gun and stun gun to subdue the dog.

Eventually, the dog was captured by Animal Control by using a "catch pole."

The Guerreros were taken to the hospital to be treated for their injuries. Brenda Guerrero's injuries are believed to be serious, though not life threatening.