A social media post announcing the event called for an end of colonialism and the abolishment of police. 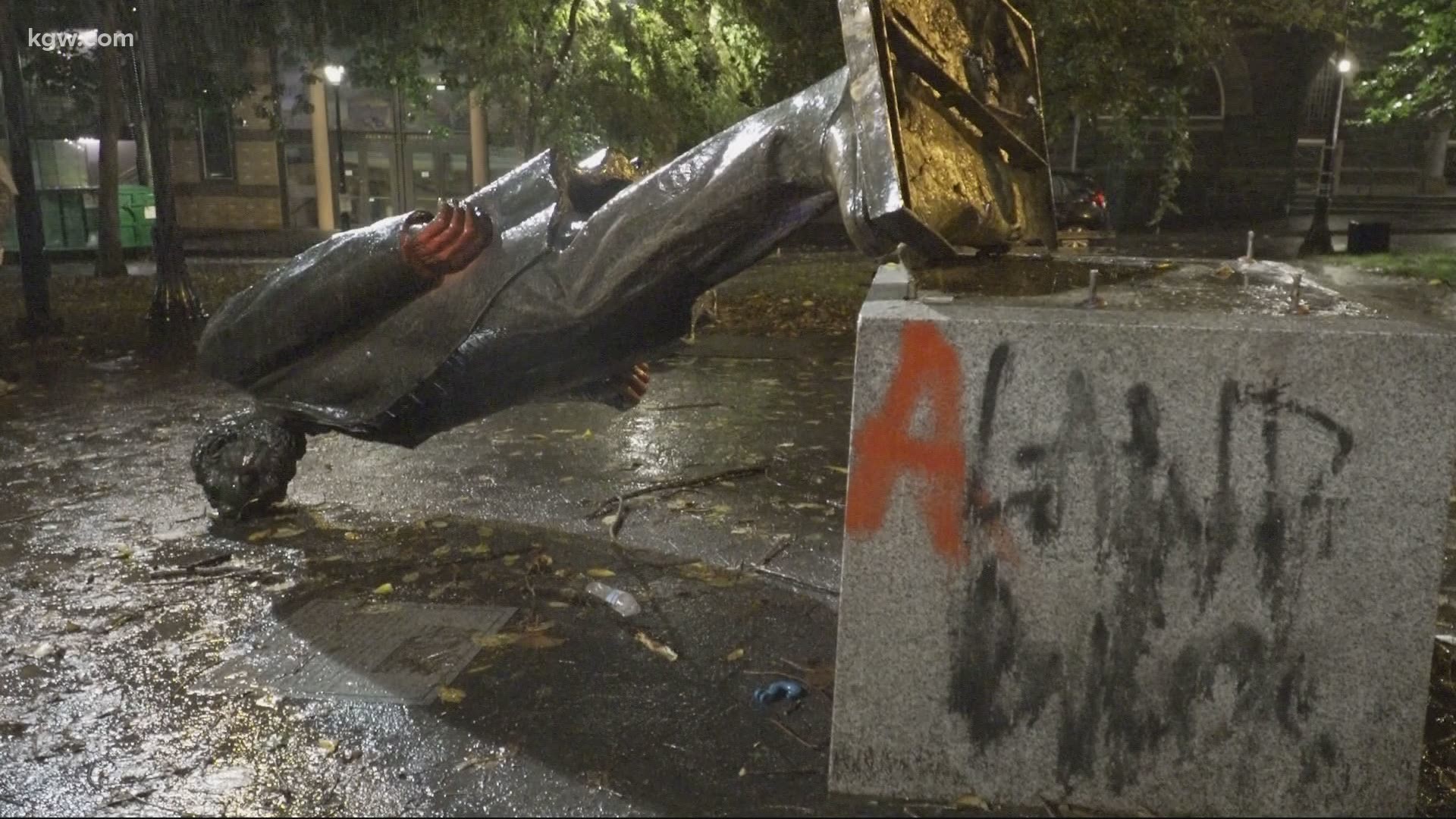 PORTLAND, Ore. — Police declared a riot in downtown Portland on Sunday night after a large group of about 300 people marched through the South Park Blocks, toppling statues of Abraham Lincoln and Theodore Roosevelt and breaking windows.

The group also broke windows and threw flares into the Oregon Historical Society. Someone stole an Afro-American Heritage Bicentennial Commemorative Quilt, which was made by 15 local Black women ahead of the bicentennial and was on display inside the museum. Officers found the quilt blocks away, soaking wet with a small tear.

Here’s the Afro-American Heritage Bicentennial Commemorative Quilt, which was stolen from the @OrHist last night. Was made by 15 local Black women (ahead of the Bicentennial).

Bartells, who was accused of driving a van that was used to pull down the Roosevelt statue, was also arrested at a protest in Kenosha, Wisconsin in August. Back then he was accused of violating the curfew that was in place after protests erupted following the police shooting of Jacob Blake.

"We are five months into this and we still have a fairly high level of violence taking place," he said. "We need to all come together and be mindful of what we want as a city and what we're willing to tolerate.

"These events late at night, they purport to have a racial justice nexus. But they're not that. They're about violence and criminal destruction. They're really hurting our community and we all deserve better."

Portland Mayor Ted Wheeler condemned the actions of the group on Monday morning during a press conference with Lovell.

"These acts are obscene," Wheeler said. He said it was "deeply troubling" to see the group attack the Oregon Historical Society, which he said has "gone out of its way to reflect the truth of Oregon history and educate the public about all aspects of Oregon history, the good, the bad and the ugly."

"It's ironic that this was the institution that was chosen to be attacked by this anarchist behavior," Wheeler said.

"Public access to art is vital to our city’s cultural fabric," she said in a statement. "I condemn all acts of violence and destruction, especially those targeting public art."

Iannarone said if people want statues removed, they can participate in the public process and register a complaint. "I'll push City Council to listen and act swiftly," Iannarone said.

President Donald Trump on Monday tweeted about the statues and called for arrests.

Put these animals in jail, now. The Radical Left only knows how to take advantage of very dumb “leadership” fools. This is Biden! Law & Order! https://t.co/w0yH3SqnrB

On Sunday evening, protesters met under the Burnside Bridge and marched to the South Park Blocks. A social media post called for an end of colonialism and the abolishment of police.

Around 8:40 p.m., police tweeted that a "mass gathering" had formed at Southwest Park Avenue and Southwest Madison Street where they were trying to pull down a statue with a chain. Police said anyone involved in "criminal behavior, including vandalism" was subject to arrest.

The statue in that area is of Theodore Roosevelt on horseback. According to the city of Portland's website, "the statue entitled Theodore Roosevelt - Rough Rider portrays the colonel in the actual uniform and accoutrements he wore in his famous ascent of San Juan Hill during the Spanish-American War." Lovell said that statue has been there for nearly a century.

OPB reporter Sergio Olmos tweeted that the statue was taken down.

The group also toppled a statue of Abraham Lincoln nearby, according to Olmos. Lovell said that statue dates back to 1928.

After downing the statues in the park blocks, members in the crowd began smashing windows at the Oregon Historical Society.

Credit: Richard Gordon, KGW
Windows were shattered at the Oregon Historical Society on the eve of Indigenous Peoples Day.

At 9:40 p.m., police declared a riot after getting more reports of damage. They told the crowd to disperse immediately.

We have gotten reports of windows being broken in numerous buildings. The gathering has been declared a riot.

Protests have been happening consistently in Portland since the killing of George Floyd on Memorial Day. Demonstrators have taken to Portland’s streets for issues that include police brutality, racial inequity, the murder of people of color by police, the abolishment of police and prisons and the defunding of police.

On Saturday night, protesters marched to Portland police’s North Precinct where 26 arrests were made. Independent journalists at the scene said the crowd of marchers was arrested with little to no warning.