In 1940 Graham graduated from the Florida Bible Institute. The school has since been renamed Trinity College and relocated to Pasco County. 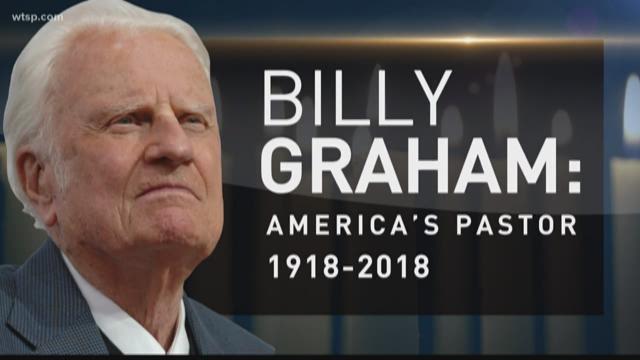 And it was at the school that Graham apparently had an epiphany, writing in his autobiography that one night while crossing the 18th green of the golf course located across the street from the college, he received his calling.

"Again for a man who ends up having such a big historical impact for us across the world, to have that happen right here in Temple Terrance is a pretty special thing," said Jared Barr, marketing and information officer for Florida College.

A historical marker near Florida College stands as a reminder of Graham's time in Temple Terrace.

In 1940 Graham graduated from the Florida Bible Institute. The school has since been renamed Trinity College and relocated to Pasco County.

But school officials say Graham has remained a loyal supporter of Trinity, sending money, speaking at commencement ceremonies and even writing prayers for the school.

"When he came here he was really going deeper in the word of God and he really attributes a lot of his passion, authority and confidence in the gospel from what he heard in the classroom at the college," said Mark O'Farrell, President Trinity College.

It was also during his time in Florida that Graham began his sidewalk crusades. A plaque in Tampa at Franklin and Fortune Streets notes some of Graham's first recipients of Billy's ministry were "derelicts, drunks" and "Skid Row bums."

Dr. O’Farrell says it was Grahams love of others that helped him connect with so many.