10News shows you the best way to set up sandbags to keep water out of your home plus a device that some say works to keep away serious floodwaters. 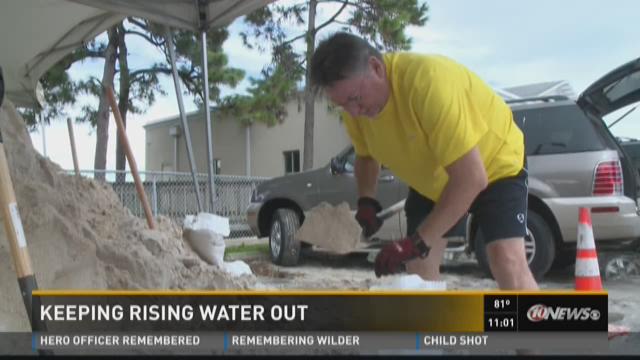 Tampa, FL – In advance of the upcoming heavy rainfall in the forecast for Tampa Bay, many are loading up on free sandbags being offered by cities and counties across the region.

When it comes to the best way to set up sandbags to keep water out of their homes many don’t realize there’s an art.

“I don’t have a plan. I’m winging it to be quite honest with you,” Jennings admitted.

10News WTSP joined up with the folks at Lowe’s to show you the best way to make sure your sandbags do their job.

Manager Daniel Ray says just setting them by the base of the door isn’t the best practice.

“That’s not going to stop the water from going into your house,” he said.

Ray says you want to fill sandbags about half to three-quarters full and then lay them flat -- like bricks -- outside the base of the door.

“We’re going to brick stack it,” he explained.

After you lay out the first row, you want to stagger a second row of bags on top.

“Put it on top of that crease there which doesn’t allow the water to seep through,” Ray showed.

He says a good rule of thumb is to lay the bags the length of the door and then add another row on top.

Ray explained that leaving room in the bags allows the water to help the sand expand and stop other water from flowing past.

Sandbags are a cheap, quick and effective way to stop minor flooding, but when it comes to serious flooding one company says they have a proven method.

Gulf Coast AquaDam offers the plastic and fiber tubes that you fill with water and surround your home.

In June, a Texas man set one up around his home and kept out massive amounts of floodwater from the Brazos River.

“This is a dam filled with water holding back water,” said Randy Wagner.

The folks with Gulf Coast AquaDam say their products cost between $4,000 and $8,000 depending on your property. They say it’s easy to set up and store yourself. The AquaDam will last between 8 and 10 years.

The company says they’re bringing some to the Tampa Bay area and hope to arrive before any flooding that could be caused by Tropical Depression 9.

WHERE TO GET SANDBAGS

Several municipalities are offering free sandbags to residents as a storm approaches.

The City of Tampa will to open sandbag locations from 8 a.m. to 7 p.m. Tuesday. They will be available to city residents at three locations:

There is a 10-bag limit. Residents must show a valid identification such as a driver's license or utility bill.
Residents should report flooding issues by calling (813) 274-3101.

Sandbags will be available from 8 a.m. to 4 p.m. at these locations:

Pinellas County will offer sandbags at the following locations on Tuesday:

There is a 25-bag limit. They will be available during daylight hours. Material and bags will be at the sites. Residents must fill their own sandbags.

Sandbags will be available Tuesday and Wednesday at Gulfport City Hall, 2401 53rd St. S. from 8 a.m. through 8 p.m. or until inclement weather begins. There is 10-bag limit and proof of residency may be required.

The city is offering sandbags from noon until 8 p.m. Tuesday at these locations: