Sunday night Erin posted a photo of a fellow student's racial promposal on Facebook. The student is seen holding a white poster that read, "If I was black I'd be picking cotton, but I'm white so I'm picking U 4 prom?" 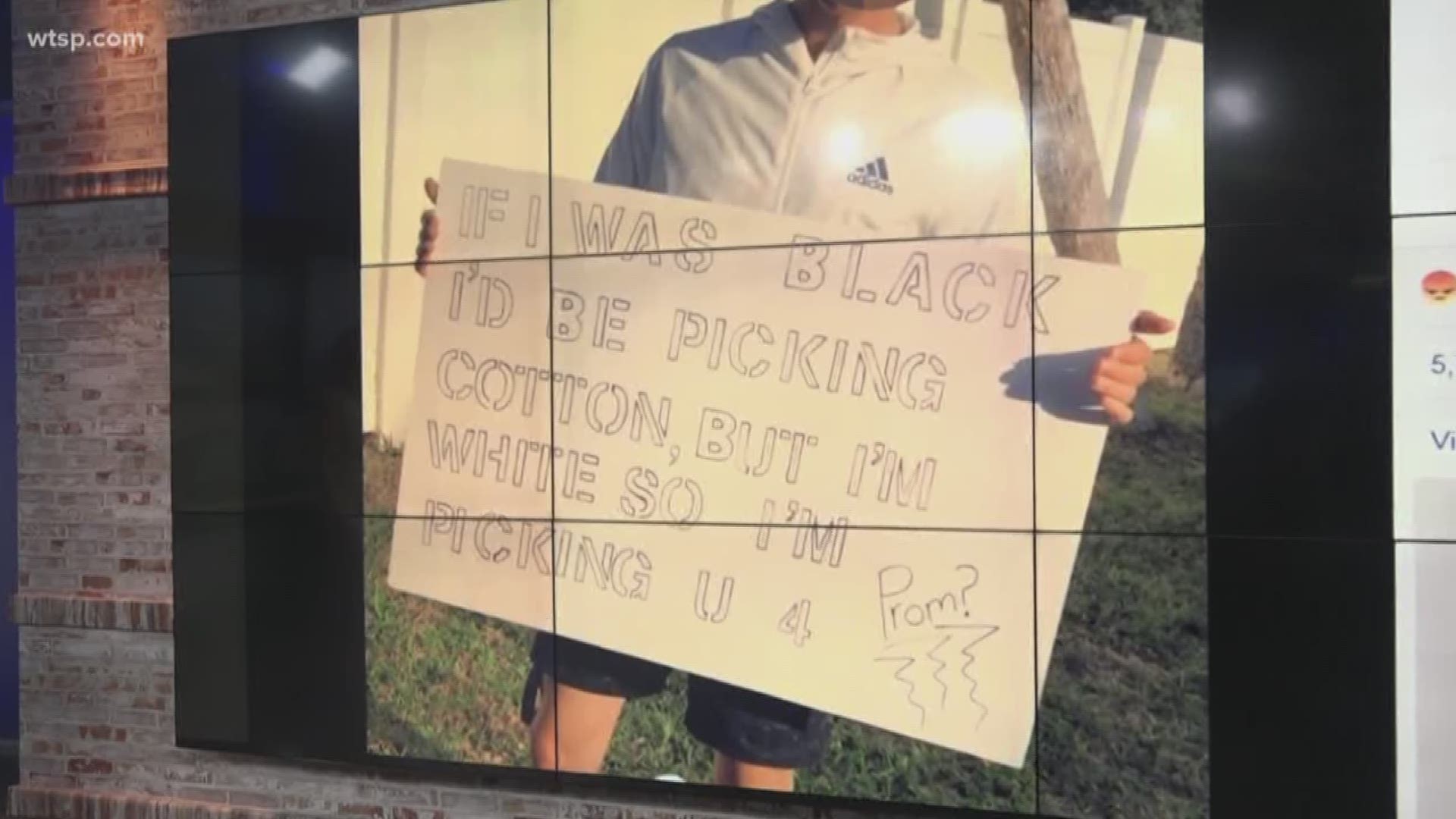 She said, “This is not okay. This is hate speech and should not be expressed in school. We already have enough with guns in school and now you want to bring racism into it?”

Sunday night, Williams posted a photo of a fellow student’s racial promposal on Facebook. The student is seen holding a white poster that read, “If I was black I’d be picking cotton, but I’m white so I’m picking U 4 prom?”

“He didn’t think, maybe it’s racist, he thought it’s another joke. That’s how society is… students think racism is a joke and it’s not!” Williams said.

That photo went viral overnight and by 1 p.m., had about 12K shares. That’s when Facebook took it down, but not before Williams' message got out.

She said, “Racism is not okay, not ok at all. Stop teaching your kids to be that way.”

Williams says the photo highlights a bigger problem at her school of racism in recent weeks without consequences. She wrote a Facebook post about how administrators turned their heads to issues of racism she had brought up to them.

Williams said, “Yes the past couple of weeks I’ve been going through it with a girl and her friends. We’ve been told let it go, it still carries on…I’ve complained about someone calling me the “N” word.” She added, “The real issue is you’re (school administration) letting these kids express racism with no big consequences about it.”

The student in the photo, an 18-year-old senior, issued an apology on Snapchat for offending anyone.

He wrote, “It was a complete joke and it went too far.”

“This is not funny at all,” said Nolan Perez, a senior at Riverview High School.

Dominic Williams, another senior at Riverview High School added, “Don’t associate Riverview with it, associate it with that person. He made the statement, he doesn’t speak for me.”

“It’s not what Riverview stands for. It’s a great school,” Perez said..

Erin Williams will graduate in a few weeks. She says she’s taking a stand to show others they should too.

In a statement to parents this morning, the principal said Riverview does not condone or support the message conveyed in the post. Guidance counselors were at the school today for students.

The school district is assembling a roundtable of national and local civic leaders including the NAACP and students to discuss the issue of race not just at Riverview, but district-wide.

The incident of the photo is being investigated and the student may face disciplinary action.