Former CIA director John Brennan spoke at the Van Wezel Performing Arts Center this morning about a variety of issues impacting our country. 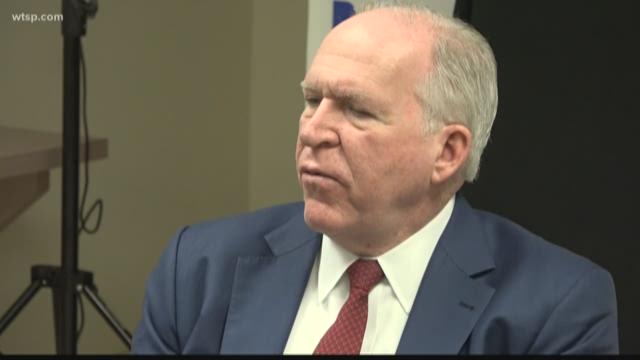 SARASOTA, Fla. -- The first of five guest speakers for the Ringling College Library Association Townhall Lecture series comes in the middle of a government shutdown.

Former CIA director John Brennan spoke at the Van Wezel Performing Arts Center this morning about a variety of issues impacting our country.

Brennan answered questions about the investigation into the Trump Administration’s alleged collusion with Russia’s Intelligence Services.

Brennan said, “I think we have to be very aware and mindful of Russian activity, not just Russian but others who try to take advantage right now of the cyber environment so that they can exploit and manipulate the democratic processes of many counties. We know Russia has done it at times with European countries...exploited opportunities in the media. Politicians have to be on guard against it and put in place safeguards.”

Brennan addressed cybersecurity. He said the country needs to take it seriously and we can’t wait for the equivalent of a 911 attack in the cyber domain to take action.

“Our future security, our future prosperity really depends on the safety, the security, liability, the resilience of that digital environment. I don’t think we yet as a country we’re doing as much as we could or need to,” said Brennan.

Brennan also responded to the President calling him and others in the intelligence community “Political Hacks." He explained why he is offended by those remarks.

“It’s very important for the leadership of the intelligence community to be as unbiased, nonpartisan, objective as possible. I am concerned about the politicization of some of these government functions, they need to have independence and integrity that American people expect. I think Donald Trump quite, unfortunately, is abusing the respects of separation of powers as well as the office of the presidency,” said Brennan.

For 38 years, the Ringling College of Art has sponsored a town hall lecture series for 38 years. Speakers range from presidents to civil rights leaders, authors, and entertainers.