State approves emergency dump of wastewater from old phosphate mine

An estimated 480-million gallons of water will go into a ditch at Port Manatee that leads to Tampa Bay. 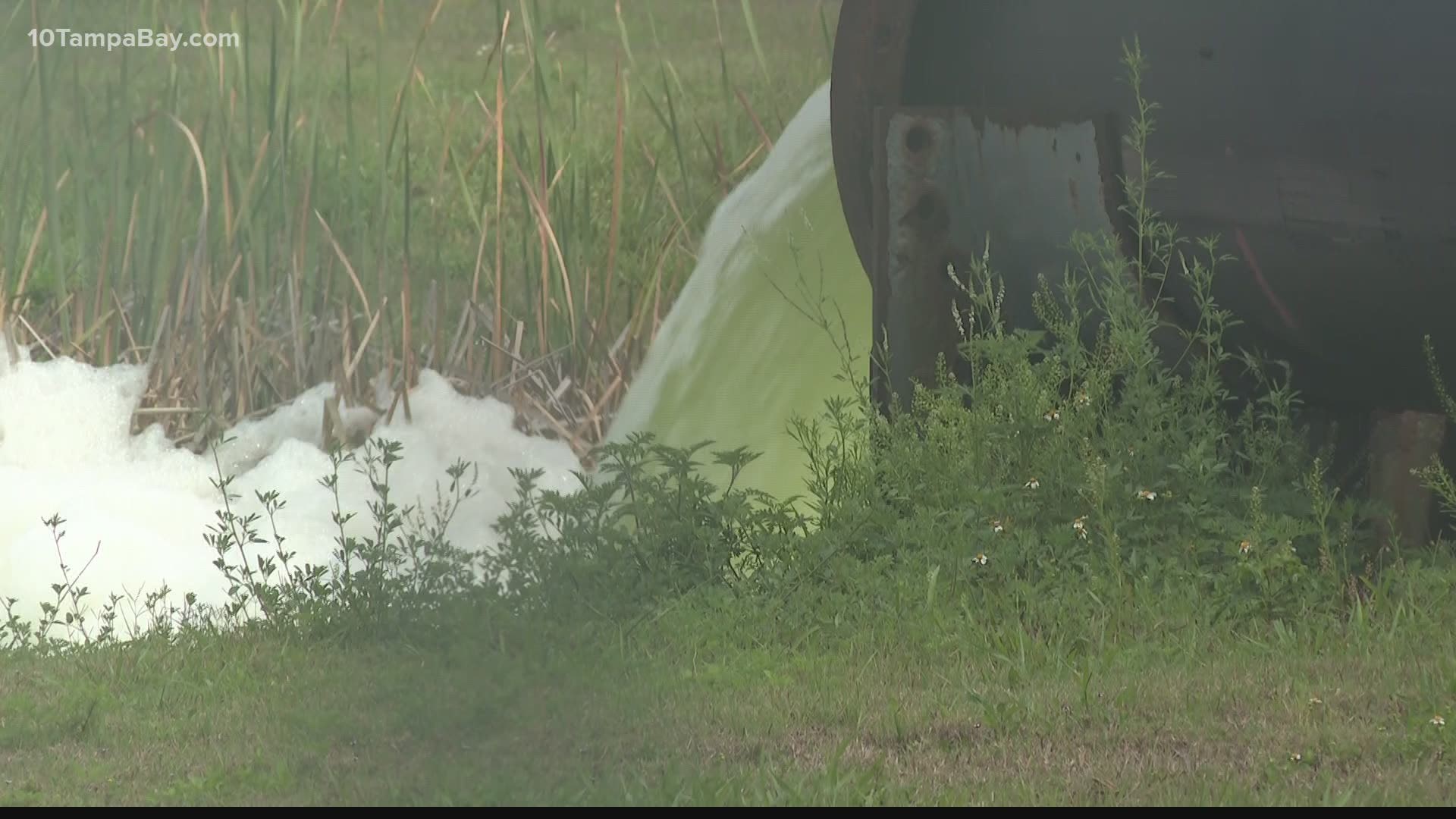 PALMETTO, Fla. — Years after a phosphate mine closed down near Port Manatee, state environmental regulators approved something they never wanted to do—the release of nearly 480-million gallons of contaminated wastewater into Tampa Bay.

The water had been pooled up for years in the old gypsum stacks across the street from Port Manatee and over the years had mixed with rain and even saltwater that was accidentally allowed to enter the holding pools.   As a result, all of the water was considered contaminated.

Fast forward years later and now engineers have determined the walls holding that water in place are in danger of collapse.   Environmental experts say if that were allowed to happen, an environmental disaster the likes of which Tampa Bay has never seen would be unleased on our fish and seagrass beds.

“If there’s a collapse, the adjacent bowls of water that have even more polluted and higher volumes of wastewater might collapse as well and that could mean an ecological disaster on a scale that Tampa Bay has never seen,” said Justin Bloom, founder of Suncoast Waterkeeper.

He says rather than risk a collapse, the state approved a limited release of water to reduce pressure on the walls.

“They are strategically taking water out that is contaminated and polluted and the best option they have right now is to release it into Tampa Bay,” said Bloom.

The greenish-colored water is currently flowing from a massive pipe into a canal at Port Manatee which leads into Tampa Bay. A crew from Suncoast Waterkeeper sent boats to the area where the water is discharged to take samples.

The concern is over high levels of ammonia and nitrogen which is bad for the bay and can fuel algae growth. Environmental watchdogs say that can lead to seagrass death and fish kills.

“That’s the immediate concern but there are other concerns about potential heavy metals that might make their way into the sediment of the Bay and remain there for a very very long time,” said Bloom.

The old phosphate mine is on property now owned by HRK holdings, a company that purchased the land with hopes of redeveloping it for commercial use.

Jeff Barath, the site manager for HRK spoke to 10 Tampa Bay last summer and says the company is working to do the right thing.

“I’m working to maintain environmental integrity and continue to protect the community just like I have done for the last decade,” said Barath at the time. He says the water is so clean he’s even taken a swim.

“It’s primarily seawater. There’s a full seawater estuary that is up there,” said Barath.

He acknowledges the water is acidic and contains high levels of nitrogen which is bad for the Bay.

“That nitrogen acts as a fuel-- a food source for algae growth,” says Barath in regard to the reason the Department of Environmental Protection did not want the water released.

The 480-million gallons the state approved to be released is just a small amount of the total water stored on the site. Environmentalists say the company should be working with the state to find ways to dispose of the rest of the water in a more environmentally responsible way.

Barath says he needs financial assistance from the state or private investors who may choose to build on the land to help remove the remaining water.

“I need help,” said Barath. “I don’t have capital to address this.”

Possible options would be to pump the water onto a barge where it could be treated and later released back into the Gulf of Mexico. Barath says his company has also explored ways to speed up the evaporation process using a misting system similar to sprinklers.

But some fear it could ultimately be the state that winds up paying for any cleanup down the road.

“I think unfortunately if there are any impacts the taxpayers are going to be the ones footing the bill because this is a legacy hazardous waste site that used to be a phosphate company and now it’s owned by a holding company,” said Bloom. “So the likelihood of them footing the bill-- I’m skeptical of that.”