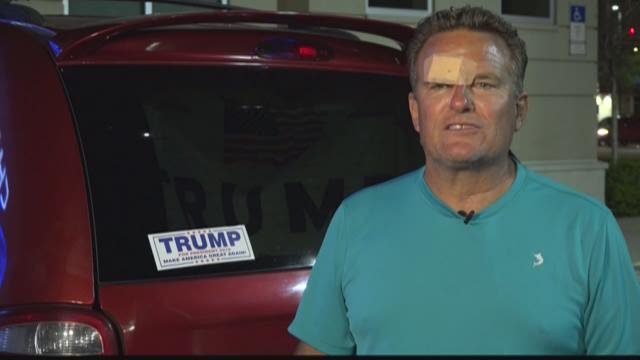 KENNETH CITY, Fla. — If you’re driving behind Gregg Dunay, you have no doubt who he supported for President.

“I’m a huge Trump fan,” said Dunay, proudly showing off the Trump bumper sticker he got at a rally in Sarasota just before the election. “I think it’s the greatest thing to happen to America in years.”

And while he knows not everyone agrees with his political views, Dunay never expected what happened Tuesday while he was trying to change lanes at a stop light near 66th Street North in Kenneth City.

“I said 'Hey, can you let me in?” he said, describing how he stuck his head out the window and politely asked another motorist to allow him to merge into the next late.

But Dunay says that other driver became enraged at the sight of the Trump sticker.

“He opened up his door and he finally said, 'I’m not going to let any person who supports Trump in front of me,'” recalled Dunay. "He’s literally screaming out the window this whole time cursing at me and cursing at Trump. ‘F Trump’ and 'F Trump’s mother.'”

Dunay said he responded by shouting back, “This is why President Trump became our president and took control, because we’re tired of people attacking us just for our political views.”

Down the street at the next light, things got even uglier.

“I had glasses on and I saw something out of the corner of my eye and that’s when he punched me.”

Dunay was taken to the hospital after the lens from his glasses broke, cutting his face and requiring five stitches.

Kenneth City police are now investigating released surveillance shots from a gas station near where the road rage incident happened. As for Dunay, he’s proud to continue standing up for President Trump, with hopes Americans can start treating each other with respect again.

“We have to come together,” said Dunay. “We have at least four more years with President Trump. Let’s give him a chance.”

Investigators say their suspect is described as a Latino male, around 25 years old, 5'8", 160 lbs. with short brown hair, brown eyes and last seen driving a black newer model Volkswagon, possibly a Passat or Jetta. The vehicle had dark tinted windows.