The 'boat graveyard': Why are there more than a dozen old, sunken boats sitting in Tampa Bay?

It's a felony to abandon a boat. It costs seven to eight thousand dollars to remove the vessels.

ST. PETERSBURG, Fla. — This story started with the question, "Why are there more than a dozen old, sunken, decomposing boats, sitting in one of the most beautiful county parks in the Tampa Bay area, surrounded by mangroves, birds, and jumping fish?"

The second question was, "Can't someone take these out of the water? There must be a reason why it's not getting done.”

That was on October 15th. More than 30 days later and many interviews and e-mails, 10News is getting closer to finding the answer to those questions.

On November 7th and November 13th, FWC issued removal orders for two of the vessels. Pinellas County Environmental Management Division told us it received the orders and has scheduled the removal within 30 days.

That county division only executes the order and is not privy to when these investigations began.

This graveyard of junky boats is just offshore from a local hangout called "The Getaway" in St. Petersburg. Visitors are asking about the vessels and the danger they pose.

Urban Kai runs a stand-up paddleboard and kayak rental operation next door. Instructors and customers there wonder the same thing.

10News Anchor Katie McCall popped into the shop a few times and talked to people there. All of them said the same thing: "Why isn't someone doing something about these old boats?"

The instructors there say it's the number one question people visiting the area ask them. Which is sad, because this is a beautiful area.

Katie went out on a paddleboard and shot more than a dozen of these boats with a GoPro camera.

All of the boats are within about 1/4 mile of each other, so it was easy to reach each of them using Drone10. The boats were submerged, with the tip of just one mast visible.

Next, 10News called Florida Fish and Wildlife Conservation Commission, because its boats patrol the area. FWC is the State of Florida's enforcement arm for what are called "derelict vessels."

That roughly means "old, junky boats someone just left in the water."

FWC issues citations and fines when people leave their boats in the water too long, and in bad condition. And they issue orders of removal if the people can't be found and held accountable.

It's a felony to abandon a boat. It costs seven to eight thousand dollars to remove the vessels. The state repays 75% to the entity that removes the vessel.

10News told them about the area, gave the address, and showed them pictures and videos to try to find out whose job it is to get them out, and why that wasn't happening. Is it someone else's job? Who is involved? Who is supposed to be doing what, and when? I followed up with an email on October 15th.

Here's part of that e-mail:

"I am working on a story about abandoned, decaying vessels that are a real eyesore and an environmental hazard, in St. Pete. We have about a dozen such vessels right across the Gandy bridge. I went out and shot video of these, on my paddleboard. Several of them have visible decals identifying them, and some have warnings posted by FWC. These boats are in such bad condition, one of them is almost not visible from the surface, making it dangerous."

It's obvious by looking at them that these have sat there for years, with no action taken.

My story's objective is to call attention to the problem, seek a solution, and work with the appropriate agency to get a result that solves the problem.

We can't leave our cars sitting on the side of the road, for years. So why is this the case with boats? And who is responsible for taking these out, when the owners have clearly abandoned their responsibility?"

On November 5th, I was scheduled to meet with an FWC spokesperson to do an interview from the shore at that spot.

They told us that they work with other agencies to investigate derelict vessel cases and that the legal process takes six months to a year before FWC can issue an order for a municipality or county to remove the boats. They have to give the owner the chance to take action.

Since the boats we were asking about appear to have been here for years, and eyewitnesses tell us the same, we asked about those, and who was investigating them, if anyone. The officers did not have any specific information on investigations involving any of the boats but said they would get back to me with the information.

That was on November 5th.

As I write this and have submitted requests in writing as well, FWC is still working on that request for us, and we appreciate the Commission's efforts to be transparent. We know they have a hard job. We want to see where in the process things are getting jammed up. This isn't about finding fault.

Somewhere between the citation and removal, there's a kink.

The officers said it was a complicated process, because of jurisdiction, and that multiple agencies work this one area of boats. There was also private property involved, which is why they said they couldn't say for sure who was supposed to deal with this boat graveyard.

FWC doesn't remove vessels. It is the agency that opens cases and investigates, and then issues orders for removal to the city or county where the vessels are. The officers said these boats were in part the responsibility of: St. Petersburg Police Department, Pinellas County Sheriff's Office, and that they were possibly on Duke Energy's private property, because the company owns submerged land in the area.

I took the video to the City of St. Pete. I also talked to its police department. Immediately, both the city and police knew what boats I was talking about.

They said they're not in St. Pete jurisdiction. They also tipped me off that FWC had done a boat tour on August 9th, attended by the city, and gave me the names of five FWC employees who went on the tour.

The city gets calls about these boats and said it was anxious for the state and county to take action to get them out.

Then, 10News reached out to Duke Energy. The company was very responsive. It is aware of the vessels and works with the authorities in the area to get the owners to remove them. But the company says it isn't Duke's responsibility, because it is a public waterway and says it is in Pinellas County's jurisdiction.

10News went back to FWC with the above information. The FWC's response was that St. Pete isn't responsible. Neither is Duke.

On November 7th, we received the following from FWC:

"18 derelict vessel cases have been opened in the Snug Harbour/Masters Bayou area. FWC said it was working closely on these cases with the Pinellas County Sheriff's Office, and that 2 of the boats were ready for removal."

Next, 10News asked to speak to someone from the Pinellas County division that handles derelict vessel orders, to see if there were any removal records sent in. Pinellas County's Environmental Division Interim Director, Andrew Squires, contacted us with some news he received. 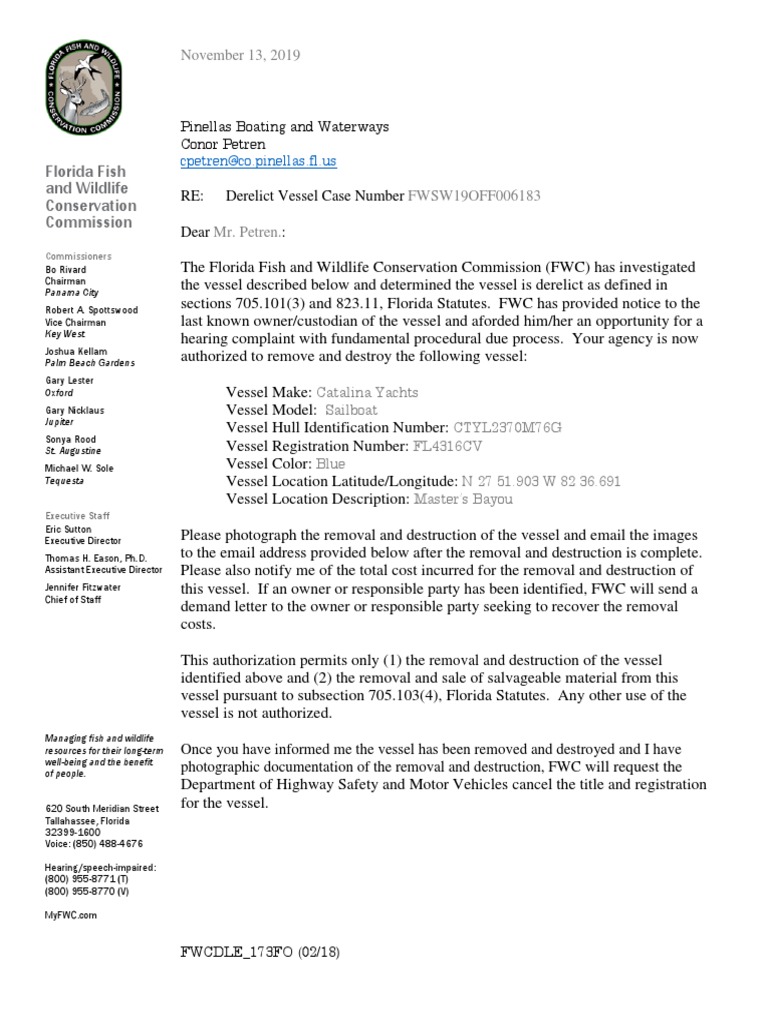 Squires produced two FWC derelict vessel on Nov. 15 regarding the removal authorization letters, one dated Nov. 7th, the other Nov. 13th. He said he scheduled them both to be hauled out and destroyed within 30 days, and said his division has arranged for the state to compensate Pinellas County for 100% of the cost. Squires also produced documents showing Pinellas County spent $219,200 in 2019, to remove 34 boats.

“It averages out to six thousand, seven hundred dollars per vessel… there can be some vessels that cost 84-85 thousand dollars, yes," he said.

10News visited Squires at his office, where he explained that the county gets its orders from FWC, and isn't aware of when the cases FWC mentioned were opened.

10News requested those records from FWC and plans on shooting the removals of the two vessels by the salvage company Pinellas County hired.

10News will continue to ask FWC about the remaining 16 eyesores.