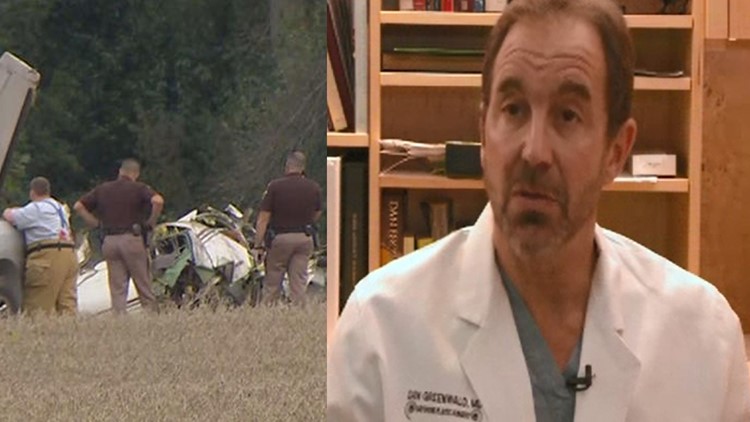 KOKOMO, Ind. — A small plane has crashed outside of Kokomo, killing one person.

The FAA and NTSB have been contacted to investigate.

It happened on the east side of Kokomo off of SR-22 and CR 300 E as you are heading towards Greentown.

The twin-engine plane was found a few hundred yards from the roadway in a soybean field, the Howard County Sheriff's Office confirmed. The pilot of the plane was found dead on deputies' arrival.

The coroner confirms the plane left the Kokomo Municipal Airport shortly before the crash.

The Howard County Coroner has identified the pilot killed in the crash as 59-year-old Dr. Daniel P. Greenwald, M.D. of Tampa, Florida.

Autopsy reports confirmed he died of blunt force trauma from the crash. The final cause of death is still pending.

NTSB and the FAA continue to investigate.

Tampa General Hospital, who Greenwald has worked with in the past, provided the following statement:

We are deeply saddened to learn of the tragic death of Dr. Daniel Greenwald, an outstanding member of our medical staff for more than two decades. He was an immensely talented surgeon who took on the most complex cases and mastered them. His education included studies at Harvard, Princeton and Yale. He was a member of the American Society for Aesthetic Plastic Surgery, as well as several other medical and scientific societies, and was nationally respected in his field.

We will remember Dr. Greenwald’s sparkling intellect, his kindness to everyone he met, and his great enthusiasm, not just for surgical innovation, but for living life to the fullest. He cared intensely about his family, his colleagues, and his friends. No matter how busy he was, he always took time to connect with the people around him with sincerity and empathy. He was deeply dedicated to his patients, including those who faced devastating traumatic injuries, and his rare skills brought so many of them healing and renewed health. All of us at TGH are grieving his loss. We send our deepest sympathies to his family.

RELATED: 2 pilots among 7 killed in B-17 crash in Connecticut