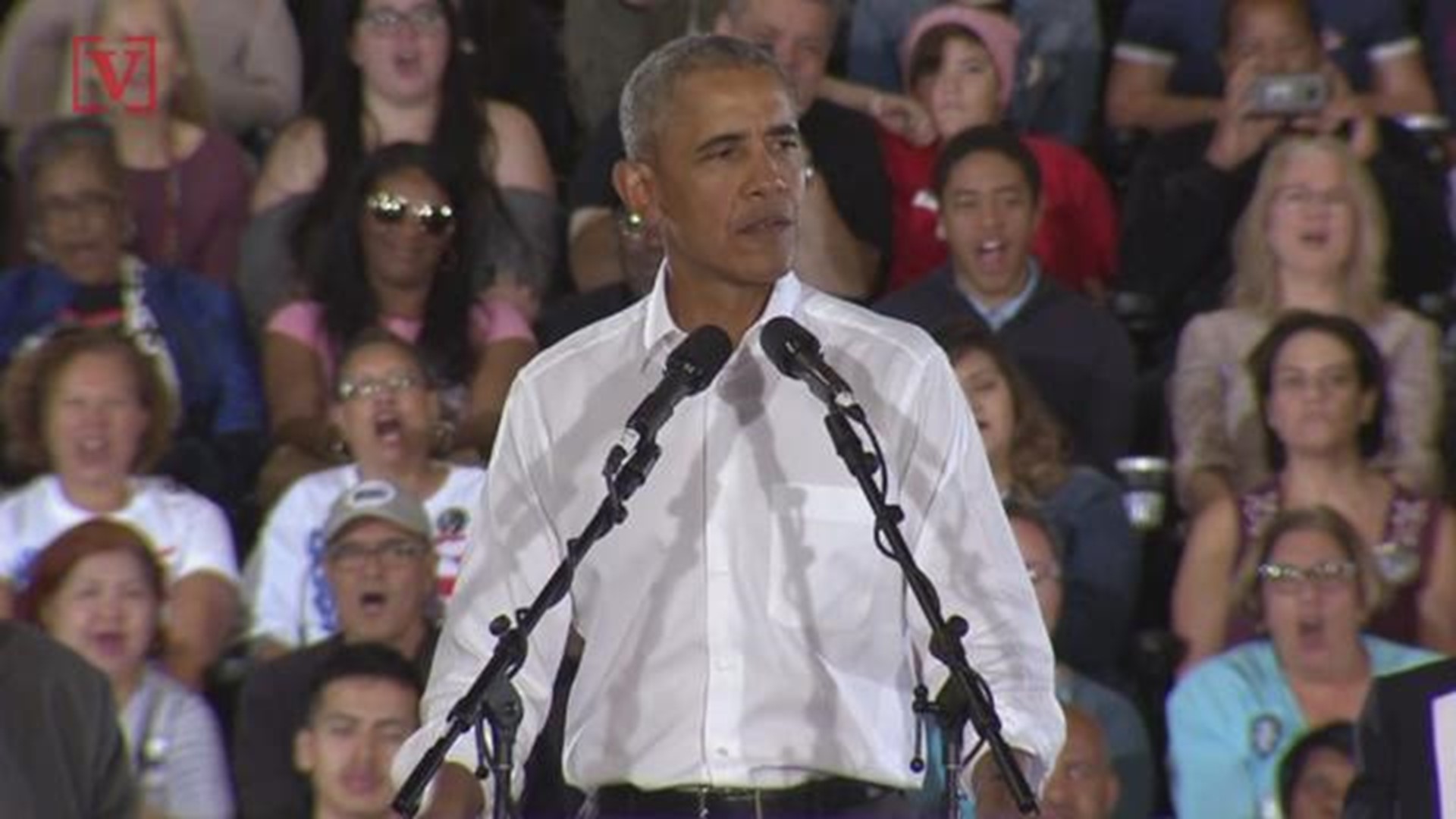 NEW YORK — Authorities were investigating two additional suspicious packages Wednesday evening after an all-day effort that led to the discovery of devices – including pipe bombs – sent to prominent Democrats across the country, including former President Barack Obama and Hillary Clinton.

The latest discovery Wednesday evening was a package believed to have been addressed to former Vice President Joe Biden. Reuters and CNN reported federal authorities were searching for the package, which was returned to sender. It was considered suspicious due to the similarities to other packages discovered.

The FBI said agents have intercepted the package and a second, both addressed to Rep. Maxine Waters, D-Calif. The first was discovered by Capitol Police Wednesday afternoon at an off-site mail facility in the Washington area. The bureau confirmed the two packages in a statement, saying they are "similar in appearance" to the others found.

The packages are the latest in a seemingly coordinated coast-to-coast attack on prominent liberals. Throughout the day Wednesday, packages were discovered in Washington, New York and Florida.

CNN's offices in midtown Manhattan were evacuated after a package addressed to former CIA director John Brennan, a frequent commentator on the network, contained a pipe bomb and an envelope with white powder inside.

New York Gov. Andrew Cuomo announced he was deploying 100 National Guardsmen to mass transit systems across the state in light of the threats and to help people feel safer as federal authorities attempt to find a motive and the person or people responsible.

"The packages were affixed with computer-printed address labels and six Forever stamps. All packages had a return address of “DEBBIE WASSERMAN SHULTZ” [sic] in Florida," the agency said in the statement.

The packages were taken to the FBI lab in Quantico, Virginiafor examination.

"So far, the devices have been what appear to be pipe bombs," NYPD Deputy Commissioner John Miller said in a mid-day news conference Wednesday in Manhattan.

The joint terrorism task force is working with FBI field offices to search for other suspicious packages. Authorities began looking after the first two arrived, and New York police were at CNN when that package was discovered.

All of the recipients identified have been high-profile targets of President Donald Trump, leaving all eyes on what the president's message would be at a rally Wednesday night.

Throughout Wednesday, many of the president's critics placed blame on his rhetoric, which they say incites violence. Obama's former top political strategist David Axelrod asked in a tweet what tone the president planned to take at a campaign rally in Mosinee, Wisconsin, Wednesday night "given the serial bombs that were delivered to several of his favorite verbal targets?"

What tone will @realDonaldTrump take tonight at his rally in Wisconsin, given the serial bombs that were delivered to several of his favorite verbal targets?

At the White House, Trump condemned "this egregious conduct" and called it "abhorrent to everything we hold dear and sacred as Americans."

He promised to "get to the bottom of this" and punish the perpetrators.

"The safety of the American people is my highest and absolute priority," he said. "The full weight of our government is being deployed to conduct this investigation and bring those responsible for these despicable acts to justice. We will spare no resources or expense in this effort."

Arizona GOP Sen. Jeff Flake, who has been a target of Trump's ire, said the president should stop labeling the media as the "enemy" or verbally castigating political opponents.

"Words matter," Flake told CNN. "If he were to take a more civil tone, it would help. … We all need to watch the rhetoric that we use. People hear them and then follow it. ...Those of us in office need to keep that in mind. The stakes are too high right now."

The types of explosives and packaging will provide a wealth of information for investigators, along with possible fingerprints and DNA left behind by the bombmakers, said Anthony Roman, president of Roman & Assoc. Inc., a risk-management and commercial-investigation firm in Uniondale, N.Y.

“The scientific forensic abilities today are absolutely magical,” Roman said. “The way bombs are constructed and the materials used to construct them provide a fingerprint and tell an investigative story about who the perpetrators of this crime are.”

Bomb materials can be traced. Manufacturers and distributors could provide information. Video cameras where the packages were mailed or delivered could provide images of the perpetrators, as they helped do during the Boston Marathon bombing investigation.

The Secret Service said packages addressed to Clinton and Obama were intercepted by law enforcement officials.

Also Wednesday, a police bomb squad was sent to CNN’s offices in New York City and the newsroom was evacuated because of a suspicious package. The NYPD said included in the package was an envelope with white powder.

James O’Neill, New York Police Department commissioner, said the building was swept with dogs and equipment, and no additional threats were found.

"We will not be intimidated, and we will bring these perpetrators to justice," O’Neill said.

New York Mayor Bill de Blasio said there were no other credible threats in the city.

Citing law enforcement sources, CNN reported a suspicious package also was supposed to be delivered to former U.S. Attorney General Eric Holder. It ended up being sent to the Sunrise, Florida, office of Wasserman Schultz, the former chair of the Democratic National Committee, because that was the return label on the package, CNN reported.

"We will not be intimidated by this attempted act of violence," Wasserman Schultz said in a statement. "This appalling attack on our democracy must be vigorously prosecuted, and I am deeply disturbed by the way my name was used. Today, my staff and I will hug each other and our loved ones tightly, and tomorrow get back to work serving the people I was elected to represent."

Administration officials said they know of no threatening packages sent to the White House. They also note that packages to the White House have to go through an off-site processing center, so a suspicious package would not reach the building.

The package addressed to Clinton, the former first lady and secretary of state, was sent to her home in Westchester County, New York, and discovered late Tuesday night. The package sent to Obama was sent to Washington and intercepted Wednesday morning.

The Secret Service said earlier that it has launched a criminal investigation into the incidents.

"The packages were immediately identified during routine mail screening procedures as potential explosive devices and were appropriately handled as such," the Secret Service said in a statement. "The protectees did not receive the packages nor were they at risk of receiving them."

Nick Merrill, a spokesman for Clinton, tweeted Wednesday morning that no suspicious package made it to her home. Clinton was campaigning for Democrats in Florida and wasn’t at the residence at the time.

"It is a troubling time. It is a time of deep divisions. We have to do everything we can to bring our country together," Clinton said Wednesday while on the campaign trail.

Clinton added that when she is asked how she is doing, she says: "As a person I am great. As an American I am worried."

In New York City, a police officer was stationed outside the Manhattan building that houses George Soros’ Open Society Foundation, but there was no evacuation there Wednesday morning.

Property managers at the New York office building that houses the Clinton Foundation warned tenants about the package mailed to the Clinton home and said the office building at 1633 Broadway was cleared by the NYPD of any suspicious activity or devices.

The White House on Wednesday condemned the attacks.

"These terrorizing acts are despicable, and anyone responsible will be held accountable to the fullest extent of the law," press secretary Sarah Sanders said in a statement. "The United States Secret Service and other law enforcement agencies are investigating and will take all appropriate actions to protect anyone threatened by these cowards."

The packages come just weeks after suspicious envelopes were sent to Trump and top military leaders, some of which contained the natural ingredients used to make the deadly poison ricin. Federal authorities arrested a U.S. Navy veteran in Utah.

Larry Johnson, a 24-year Secret Service agent who is now CEO of CyberSponse Inc., said mail for former presidents is routinely screened off-site so that explosives and chemical or biological threats can be investigated before a package ever reaches its target. Former presidents get suspicious mail almost daily, he said.

“I’m very surprised that an organization as large as CNN doesn’t do off-site screening of packages,” Johnson said.

To have numerous high-profile recipients in one day suggests the perpetrator might be much larger than a single disgruntled letter writer, he said.

“It could be a nation state, it could be terrorism, it could be organized crime,” said Johnson, who worked in presidential protection and headed the Secret Service’s criminal investigative division. “It’s connecting the dots.”

Many times in presidential protection, the suspect is somebody who law enforcement know from previous interactions, Johnson said.

“A lot of times, the person is on record. It’s not the first time,” Johnson said. But investigators will work quickly to determine who sent the packages and why, because if it’s larger than a single person, information about the threat needs to be pushed out across the government.

“If it’s something that’s nation-state driven or national security or terrorism, it’s much bigger than one agency,” Johnson said.

At Time Warner Center in New York, a police officer with a bomb-sniffing dog checked trees set in large planters along the sidewalk on the street’s southern side shortly after 11 a.m.

There, well over 200 people stood outside. Some people, a mix of tourists, reporters and NYC residents, were curious; others were much more cautious.

“There’s always something going on in the city, but this feels a little more serious than usual," said Jocelyn Hernandez, 23. "It’s weird because people are just standing around waiting for something to happen but the officers sounded pretty serious about the threat."

Rinchen Tesphal got a CNN news alert and ran outside to see what was happening.

Dareen Mohamed also received an alert about a bomb threat.

"I think I’m more shocked than I am scared," said Mohamed, 18. "You always hear of these things happening, but you’re never there. For once in my life I get to actually be on the scene."