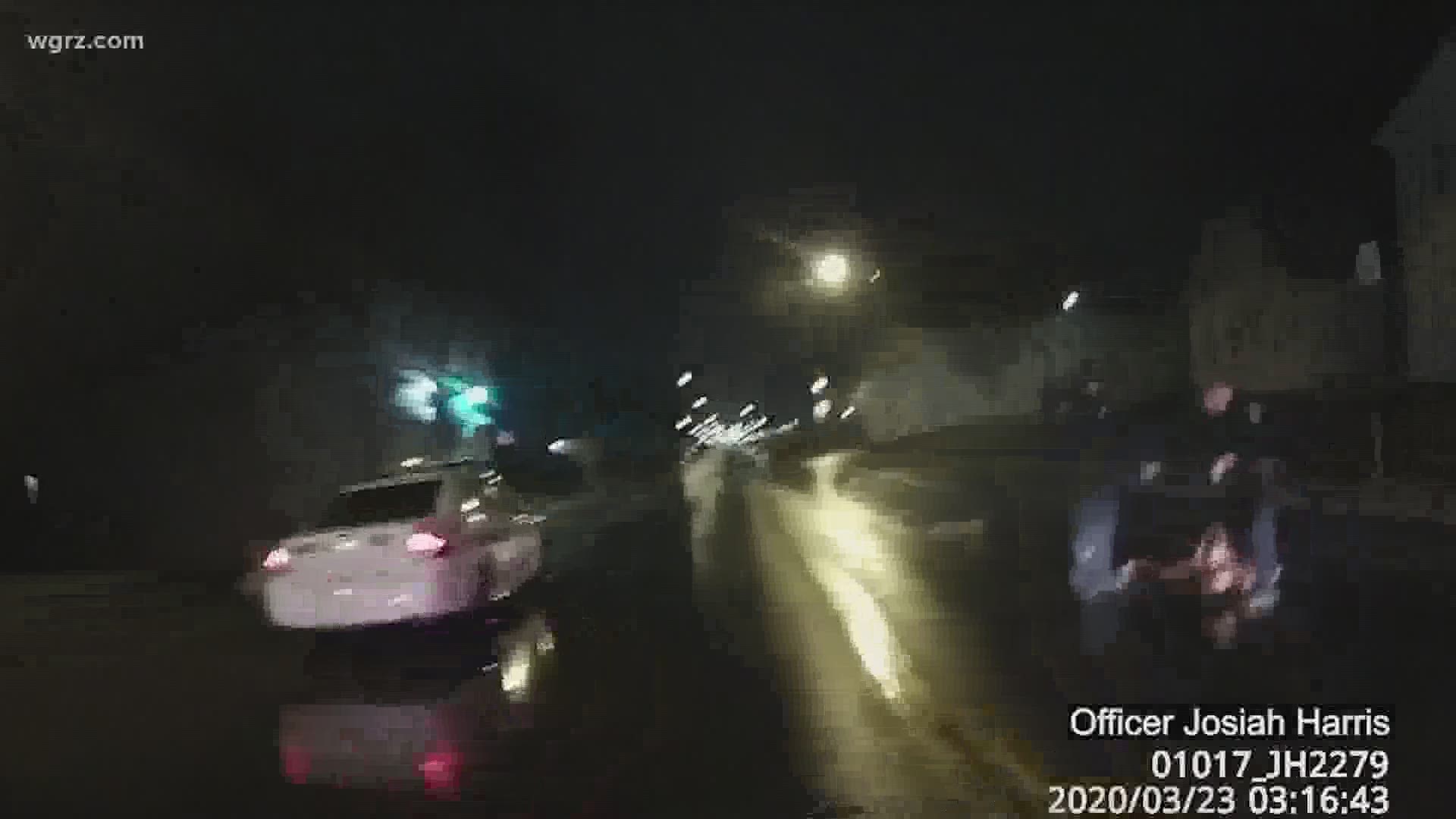 Eleven people were arrested and three police officers were hurt when violence broke out Friday night in western New York.

The evening began with a rally to demand justice for Daniel Prude, a 41-year-old Black man from Chicago who died during an encounter with police earlier this year in Rochester, New York. The case is now under investigation by the state attorney general's office.

At least 2,000 demonstrators gathered for an event overnight in the city's Martin Luther King Jr. Park before marching through downtown.

CBS affiliate WROC reports some members of the crowd began throwing rocks and bottles at police just before 11 p.m., prompting officers to use pepper balls and pepper spray to disperse the protesters.

The CBS station says some members of the crowd began lighting small fires in garbage cans and at a bus shelter. And, police say some people set off commercial-grade fireworks in the direction of law enforcement.

A bus stop has been set on fire as hundreds of protesters remain on court street in downtown rochester. #roc #danielprude @News_8 pic.twitter.com/3WVcQxSwtR

Tear gas was reportedly deployed against the crowd early Saturday morning. Four of the 11 people arrested were jailed while the other seven were given appearance tickets.

The Democrat and Chronicle newspaper reports three of the 11 people arrested face felony first-degree rioting charges. They range in age from 21 to 25.

They are now confronting police barricades on Court Street. pic.twitter.com/hbNVuc15l7

Three police officers were hospitalized and later released because of “projectiles and incendiary devices” that were thrown at them, WROC said. Two of the officers suffered cuts and swelling, and the third was burned.

Protesters stopped traffic while they marched through the city. Some members of the crowd reportedly flipped tables and shattered glass at restaurants while telling diners to leave. Show media video captured some of that.

According to television station 13WHAM, a fourth night of protests began Saturday.

Prude was taken off life support seven days after an altercation with members of the Rochester Police Department. He died on March 30.

His death received no public attention until this week when his family released body camera video and written reports obtained through a public records request. The footage shows Prude, who had taken off his clothes, complying when police ask him to get on the ground and put his hands behind his back. Prude was agitated and shouting as officers let him writhe as he sat on the pavement in handcuffs for a few moments as light snow fell.

Then, officers put a “spit hood” over his head, a device intended to protect them from a detainee's saliva. At the time, New York was in the early days of the coronavirus pandemic.

Prude demanded they remove it.

Then the officers slammed Prude's head into the street. One officer held his head down against the pavement with both hands and said “stop spitting” as Prude’s shouts turned to whimpers and grunts. Another officer placed a knee on his back. The officers appeared to become concerned when they noticed water coming out of Prude’s mouth.

Prude stopped moving and fell silent. One officer noted that he’d been out, naked, in the street for some time. Another remarked, “He feels pretty cold.”

His head had been held down by an officer for just over two minutes. Medics could then be seen on the video performing CPR before he was loaded into an ambulance.

Spit hoods have been scrutinized as a factor in the deaths of several prisoners in the U.S. and other countries in recent years.

A medical examiner concluded that Prude's death was a homicide caused by “complications of asphyxia in the setting of physical restraint.” The report lists excited delirium and acute intoxication by phencyclidine, or PCP, as contributing factors.

Prude was from Chicago and had just arrived in Rochester for a visit with his family. Police responded after Joe Prude called 911 to report that his brother had left his house and was experiencing mental health issues.

The city halted its investigation into Prude's death when state Attorney General Letitia James office began its own investigation in April. Under New York law, deaths of unarmed people in police custody are often turned over to the attorney general's office, rather than handled by local officials.

“I want everyone to understand that at no point in time did we feel that this was something that we wanted not to disclose,” Rochester Mayor Lovely Warren said at press briefing. “We are precluded from getting involved in it until that agency (the AG’s office) has completed their investigation.”

One officer wrote that they put the hood on Prude because he was spitting continuously in the direction of officers and they were concerned about coronavirus.

Still, activists demanded that officers involved with Prude’s death be prosecuted on murder charges and that they be removed from the department while the investigation proceeds.