Through sunglasses, telescopes, filters and smartphones, millions of Americans spent this day one year ago — Aug. 21, 2017 — looking skyward to see a total eclipse of the sun that spanned from coast to coast.

The path of totality — a 70-mile wide area where day became night for about two minutes — started over Government Point, Oregon, continued through the heartland and all the way to Key Bay, South Carolina. It was the first coast-to-coast eclipse in 99 years.

You would think with all the national hoopla, everyone was going to be able to see the full show no matter where they were, but the path of totality only reached parts of 12 states. 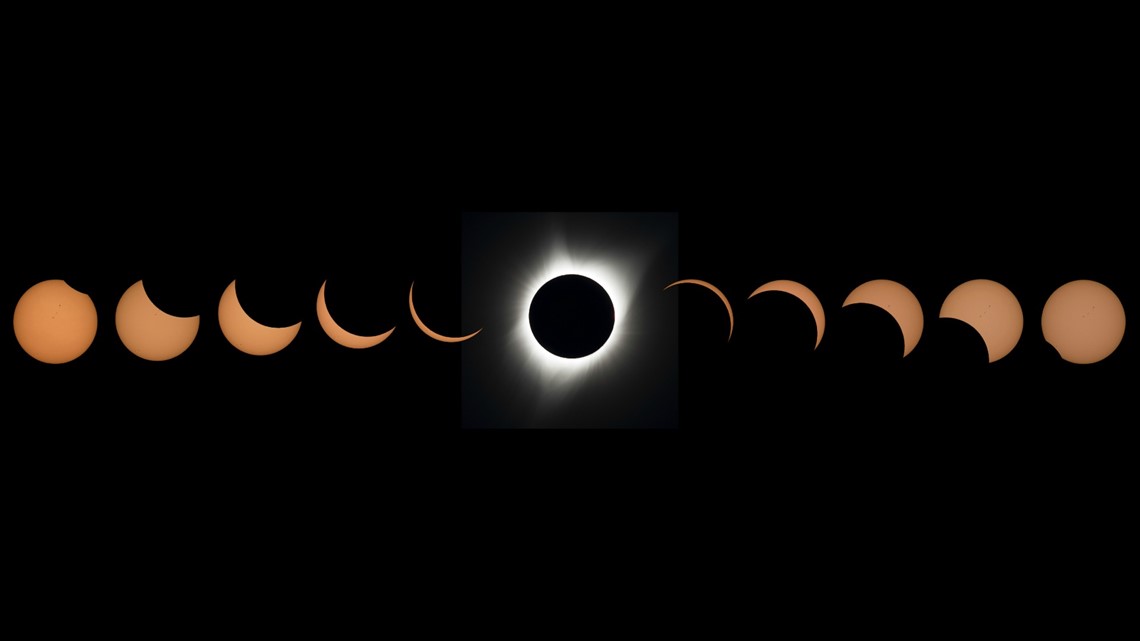 Here are just ten of the countless captured moments that marked the day.

Madras, Oregon, with a population of 6,729, saw its number eclipsed by the estimated 100,000 people who came to see the totality. Madras was almost directly in the center of the path. WATCH

Drivers had to sit for hours trying to get out of Madras on the two-lane highway. It was mirrored by the number of small planes lining up to take off from the town's airfield. WATCH

As the eclipse traveled east into Idaho, F-15 pilots from Mountain Home Air Force Base teamed up with National Geographic to get a birdseye view. WATCH

Then it was off to tiny Glendo, Wyoming. The 203 residents welcomed thousands of people. One man turned his home into a campground for visiting astronomers. WATCH

After crossing the Nebraska wheat fields and kissing the northeast corner of Kansas, the show headed to the Show Me State to show off for Missouri.

Illinois was up next, and it was a special treat for the folks in Carbondale. They had the longest stretch of totality in the country — 2 minutes, 40.2 seconds. WATCH

This was a dress rehearsal for them. Carbondale gets to see an even longer total eclipse in 2024.

From there, the darkness skirted Kentucky, then through Tennessee. It was there, on a rooftop in Sweetwater, where a couple watched the eclipse's "diamond ring." Then the boyfriend got on one knee and proposed with his own diamond ring. WATCH

The eclipse then did a drive-by of Georgia and North Carolina before the final hurrah through South Carolina.

Doubleheader: Baseball and an eclipse

Fans in Columbia, SC, took part in a doubleheader: a total eclipse and a minor league baseball game. They called it the "Total Eclipse Of The Park." WATCH

Shadow upon the Earth

The eclipse left its impression, or at least its shadow, on the Earth. Here was the view from the International Space Station.

In this NASA handout, the umbra, or moon's shadow, passes over Earth during the total eclipse Monday, August 21, 2017. (Photo by NASA via Getty Images)
NASA

Here's what the International Space Station looked like from the ground as it passed in front of the eclipse. This video was made from a series of photos shot from a camera at 1,500 frames per second because of how fast the station was moving. WATCH

VR view of the show

Nothing compares to actually being there, but this is pretty close — a 360 degree virtual reality look at the event from Idaho. WATCH

The next total solar eclipse in the U.S. will be April 8, 2024. That one will travel diagonally from Texas to Maine. People in the path of totality will experience a peak of 4 1/2 minutes of darkness — about twice the length of the 2017 eclipse.