Trump says he's trying to be nice as he criticizes Sen. Tammy Baldwin at a Wisconsin rally following a series of attempted bombings on high-profile Democratic officials and CNN. 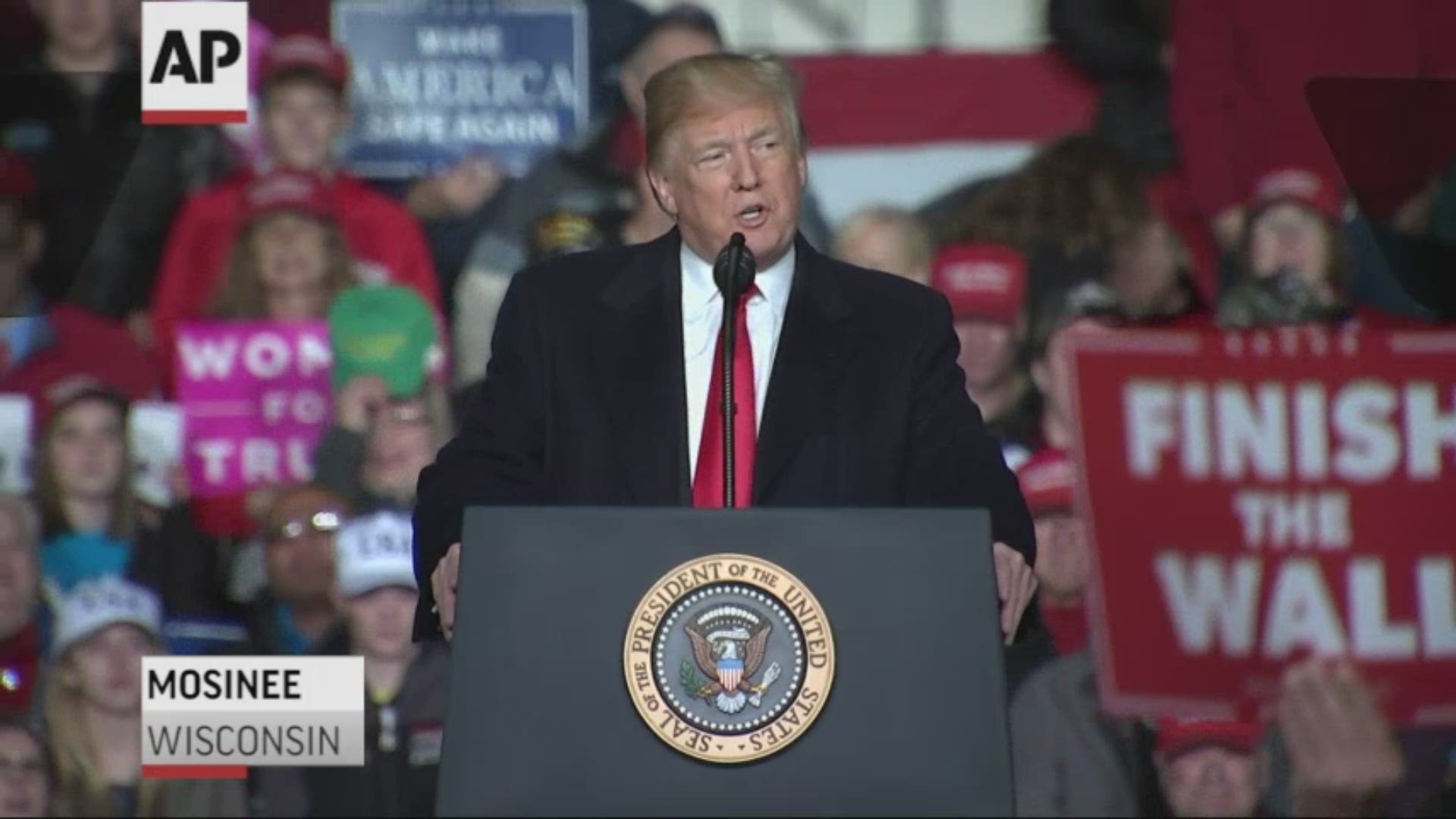 WASHINGTON — President Donald Trump on Wednesday implored politicians to stop questioning the moral character of their opponents, using a rally in Wisconsin to call for a more civil politics hours after a series of suspicious packages were sent to Democrats and media outlets.

The president's remarks interrupted the usual, natural flow to every rally.

Trump regularly criticizes the "fake news" media, the "obstructionist" Democrats and stays silent as supporters chant "lock her up" in reference to Hillary Clinton.

On Wednesday, hours before a Trump rally in Wisconsin, several of the president's favorite verbal punching bags became targets of very real threats.

All have drawn the ire of Trump and each has made their way into his speeches and Twitter feed over the years. 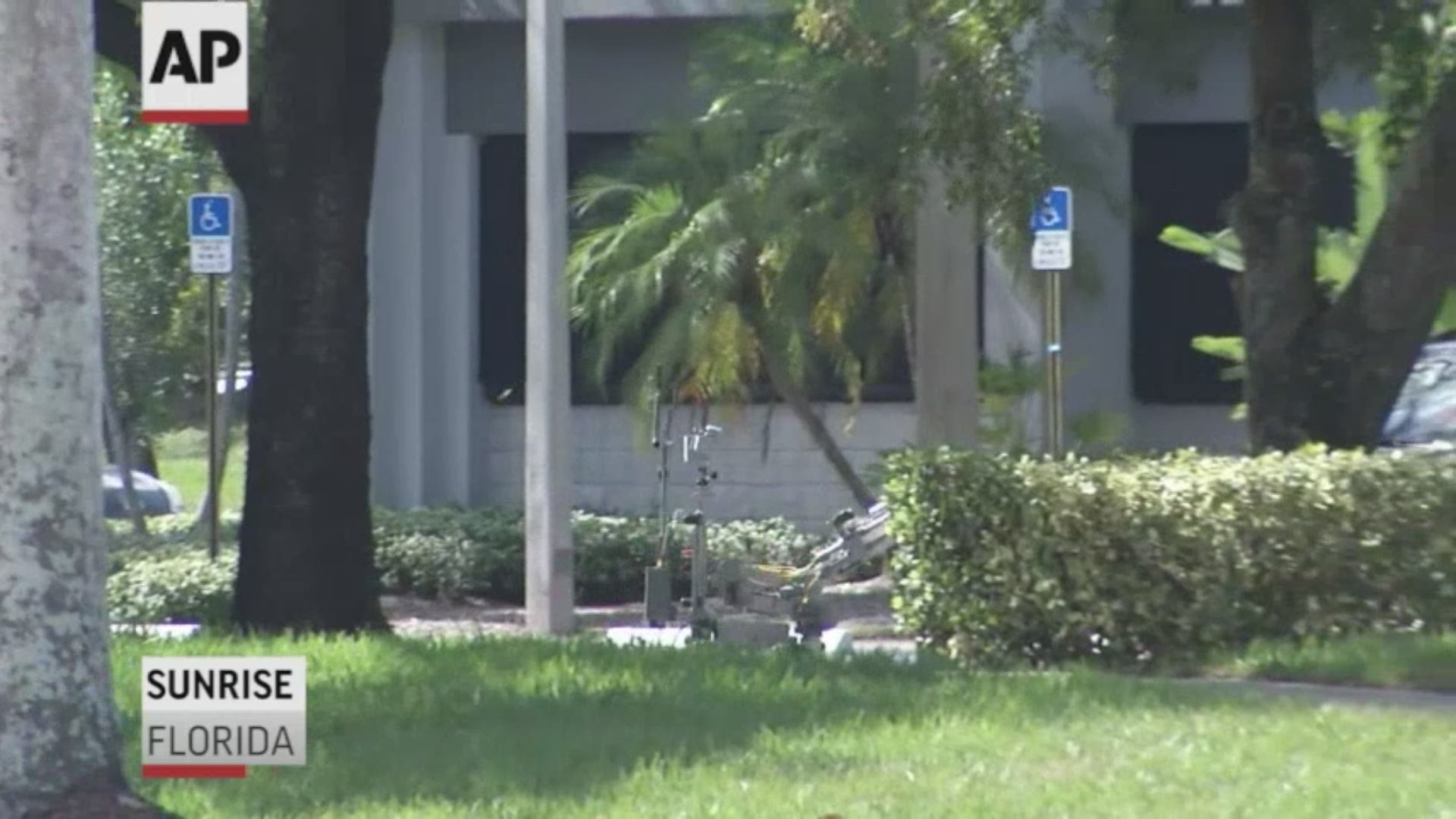 Amid the violence, which New York officials called an act of terror, what will the president's message be Wednesday evening in Wisconsin?

"I hope that this is a wake-up call and changes the rhetoric," said Jacob Neiheisel, associate professor of political science at the University at Buffalo. "But I don't know if it will."

Neiheisel said while it's likely the person behind the attempted attacks was suffering from some type of mental illness, it's not hard to link the divisions in the country, hear the president's attacks on these individuals and take it as a call to action.

"It doesn't take much for someone to hear this rhetoric and take it too far," he said. "This is a wake-up call for everyone. You don't know who will hear your words and it as an invitation."

The president's rhetoric has been inflammatory since he announced his candidacy for president.

Trump's career as a conservative politician took off when he demanded Obama's birth certificate and helped spread a conspiracy that the president was not born in America. He's continued the attacks, blaming the country's issues on the former president, including that Obama "founded" ISIS.

CNN has also been a frequent target of Trump’s “fake news” barbs. Last year the president retweeted a video of himself tackling a person with a CNN logo on their face. A “CNN sucks” chant also broke out at a Monday campaign rally.

"Lock her up" chants have been a constant at nearly every rally at the mention of former Secretary of State Hillary Clinton, who ran against Trump in the 2016 election.

Trump, before signing opioid abuse legislation during a ceremony at the White House, pledged to "get to the bottom" of who sent the packages and why. He also had a message of unity.

"I just want to tell you that, in these times, we have to unify," Trump said. "We have to come together and send one very clear, strong, unmistakable message that acts or threats of political violence of any kind have no place in the United States of America."

But some said the toned-down rhetoric wouldn't last.

"People have for years wondered whether the president would change or tone down his rhetoric as time went on but we've seen that it isn't going to happen," said Gregory Shufeldt, a professor of political science at Butler University. "We're two years into the Trump presidency and that shows us nothing is going to change."

Shufeldt said if Trump doesn't target Democrats or the media Wednesday, it would only be a temporary shift. He said this incident could replicate the response to the congressional baseball game in last summer where a lone attacker targeted Republican lawmakers. There were brief calls for unity that were drowned out with time.

"This tour has been about rallying his base and the president knows the topics to hit on," Shufeldt said. "The cynic in me says yes, maybe there's a brief push for civility, but that will quickly come back to tribalism."

"Words matter," Flake told CNN. "If he were to take a more civil tone, it would help … We all need to watch the rhetoric that we use. People hear them and then follow it ...Those of us in office need to keep that in mind. The stakes are too high right now."

He said he hoped the president would heed his own advice and unify the country.

CNN chief Jeff Zucker also criticized the White House for a “total and complete lack of understanding” of the seriousness of its attacks on the media, as his network’s New York bureau was evacuated for five hours Wednesday following the discovery of an explosive device sent there.

"To be clear, these targeted attacks were acts of terrorism. We must work to counter these forces of terror and hate, no matter the source," the Mississippi Congressman said. "Given the partisan nature of these attacks, it is time for the President to end his incessant political attacks and condoning of violence, including on the press."