With Sen. Marco Rubio and senator-elect Rick Scott, a milestone has been reached in that Florida hasn't seen two GOP senators in Washington, D.C. since the 19th Century. 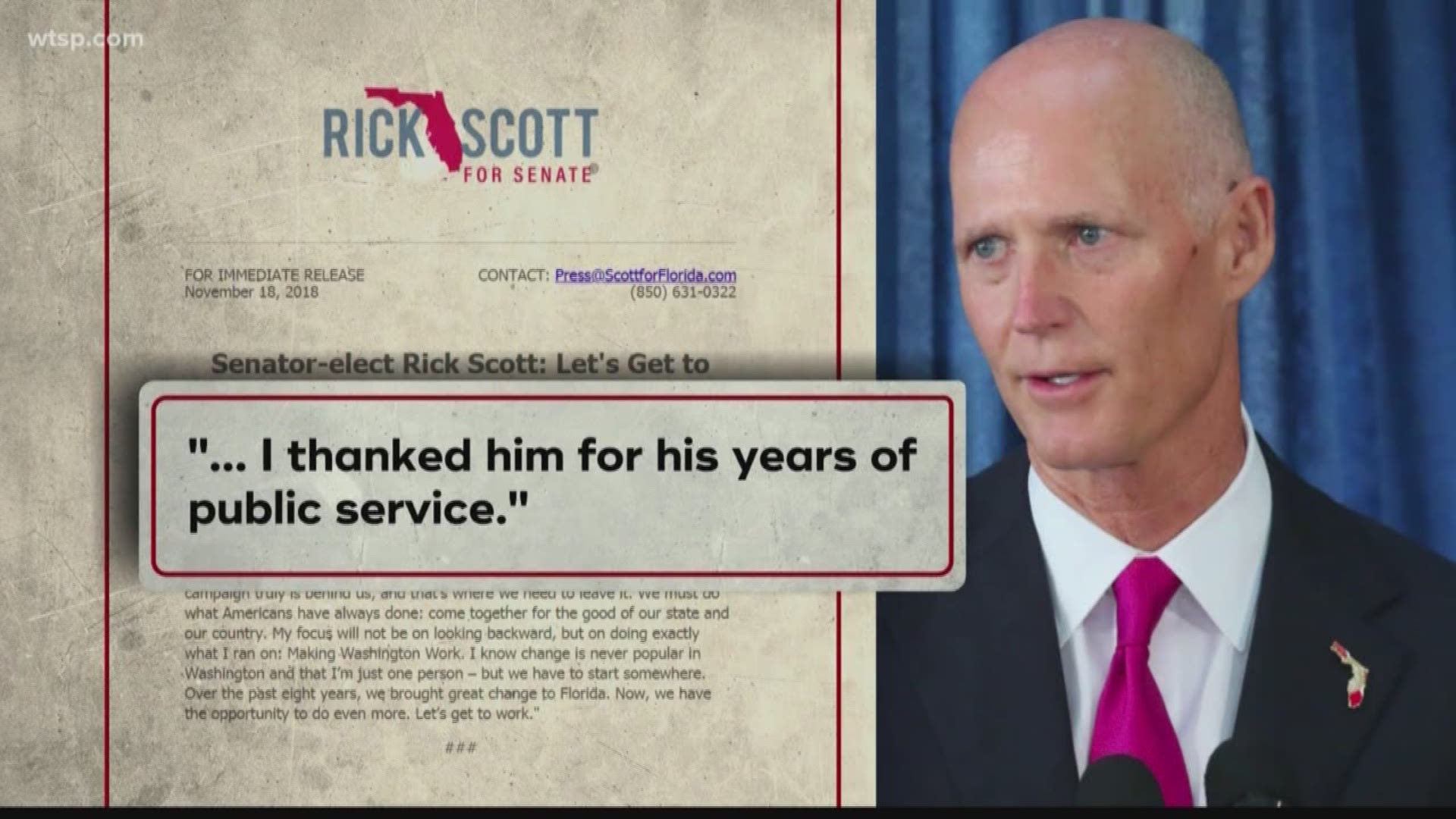 Florida will once again have two Republican senators in Washington, D.C., something that hasn't happened since the Reconstruction era in the years following the Civil War.

The term-limited Gov. Rick Scott defeated Democratic incumbent Sen. Bill Nelson to join fellow Republican Marco Rubio in the U.S. Senate come Jan. 3, 2019. It'll be the first time in more than 140 years that two Republican Senators from the Sunshine State are serving at the same time.

The hasn't been the case since Republican Sen. Abijah Gilbert left office in 1875.

No one was alive to see it last, except for maybe a giant barrel sponge in the Florida Keys.

Sen. Adonijah Welch was the first GOP Senator from Florida. He was elected by members of the state legislature in June 1868 -- before the ratification of the 17th Amendment, which gave the power to choose senators to the people. Fellow Republican Sen. Thomas W. Osborn joined him in D.C. days later, making the first GOP duo from Florida.

Both men were elected to finish out the remainder of the Congressional term; Welch would pass at renomination and go on to become the president of Iowa State Agricultural College. Osborn retired, with a claim to fame in pushing for legislation to finish the Washington Monument.

Fast-forward to the contentious 2018 midterms: Scott significantly outspent Nelson in the months leading up to Election Day, including drawing on roughly $39 million of his own fortune.

Despite multiple polls giving Nelson an edge ahead of election night, Scott campaign officials had released internal polling data showing the governor leading the longtime senator by five points – based on interviews with more than 2,000 likely voters.

In the end, the race ended up being much closer than that – so tight that it forced a manual recount, which concluded Sunday with Scott defeating Nelson by approximately 10,000 votes. Nelson has since conceded the race.

As Hurricane Michael approached the Florida Panhandle, both candidates were forced to suspend their campaigns. But, when the Category 4 storm struck, Scott won praise for the state’s swift response to the disaster. In a CBS News poll of nearly 1,000 likely voters, 63 percent of respondents said they approved of Scott’s handling of the deadly hurricane.

In recent weeks, Scott was a vocal supporter of U.S. Supreme Court Justice Brett Kavanaugh, whose confirmation process divided many Americans. On Twitter, Scott criticized Nelson for voting not to confirm Kavanaugh – arguing Nelson only did as Democratic party leadership told him to do.

Although the president was not frequently mentioned by the Scott campaign during the midterm election cycle, the governor was an early supporter of Trump – who won Florida’s 29 electoral votes in 2016.

Trump returned the favor, congratulating him on "having waged such a courageous and successful campaign."

From day one Rick Scott never wavered. He was a great Governor and will be even a greater Senator in representing the People of Florida. Congratulations to Rick on having waged such a courageous and successful campaign!