The governor argues the federal age already is 21, and the bill would have banned tobacco-free vaping flavors, potentially leading to greater cigarette use. 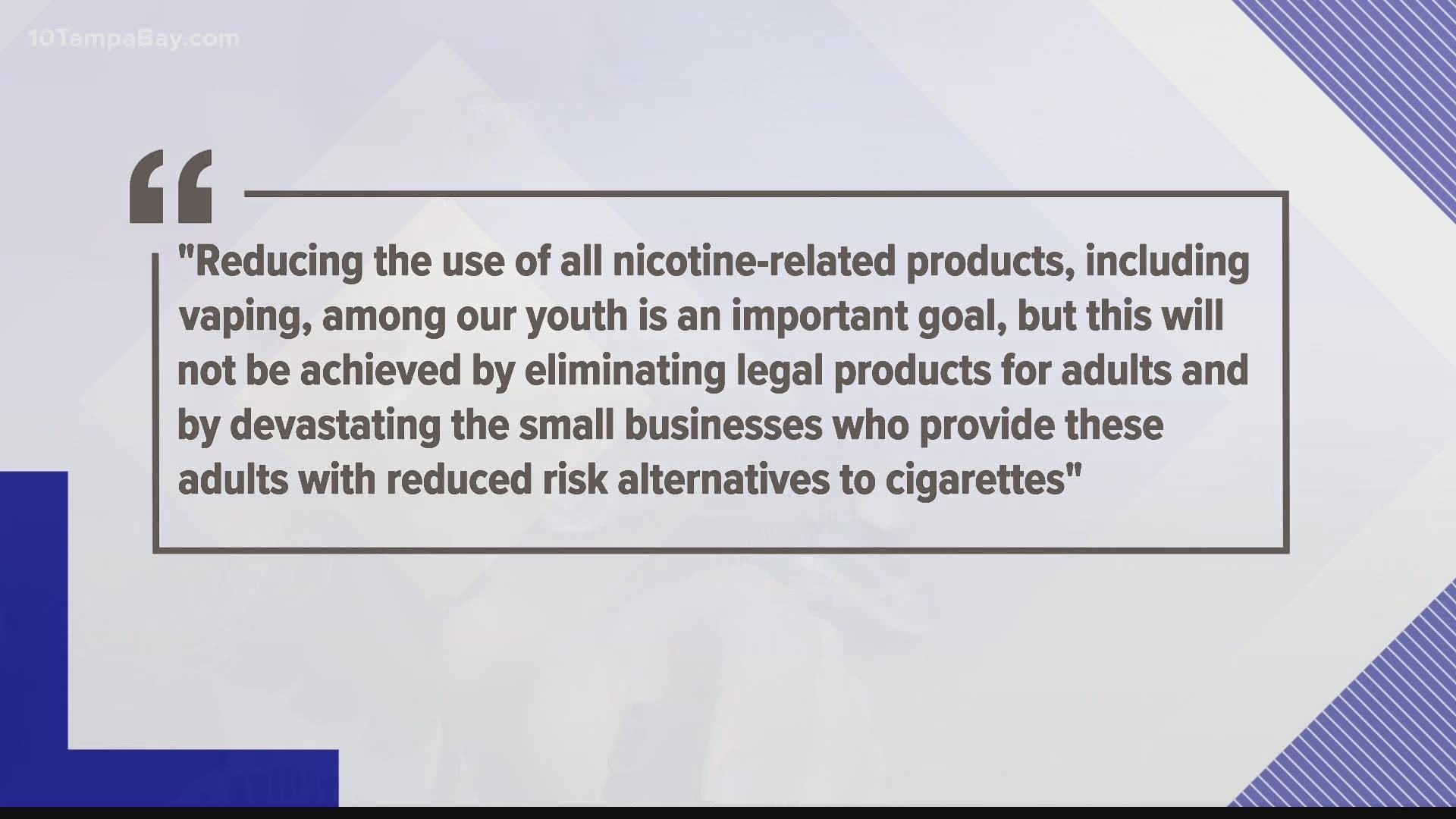 TALLAHASSEE, Fla. — Florida Gov. Ron DeSantis vetoed a bill Tuesday that would have raised the state's legal age to buy tobacco and nicotine products to 21.

Lawmakers passed Senate Bill 810 in March largely in response to youth vaping. It identified e-cigarettes and vaping products as "tobacco products" and raised the age to buy any such products, including tobacco cigarettes, from 18 to 21. The sale of vapored nicotine products also would be banned unless one received a marking order issued by the U.S. Food and Drug Administration.

The bill will not be the law of the Sunshine State, at least in its current form.

DeSantis, in a letter to Florida Secretary Laurel Lee, argues raising the legal age to buy tobacco to 21 "is superfluous given this is already mandated by federal law." He, too, said the bill would have banned tobacco-free vaping flavors "used by hundreds of thousands of Floridians as a reduced-risk alternative to cigarettes, which are more dangerous."

That ban would cause more people to resume smoking cigarettes, DeSantis wrote.

"Reducing the use of all nicotine-related products, including vaping, among our youth is an important goal, but this will not be achieved by eliminating legal products for adults and by devastating the small businesses who provide these adults with reduced risk alternatives to cigarettes," he continued.

In the past year, several people -- including at least two in Florida -- died nationwide in incidents involving vaping and e-cigarettes. The Centers for Disease Control and Prevention says data shows tetrahydrocannabinol (THC)-containing products have been linked to most cases.

Vitamine E acetate, an additive in some THC-containing products, "is strongly linked" to lung injuries, the CDC said.

"This legislation would almost assuredly lead more people to resume smoking cigarettes, and it would drive others to the hazardous black market,” DeSantis wrote. "The latter consequence is especially significant because the much-publicized cases of lung injury associated with vaping in recent years has been traced to illegal, or black market, vape cartridges containing THC, not to the types of legal aping products this bill would abolish."

Health advocates argued the measure was necessary to protect public health, particularly among young tobacco users. While smoking among youth has been on the decline in recent years, vaping has surged.

The rise has alarmed health experts. They worry about nicotine addiction and stunted brain development.

“I am disappointed with the Governor’s decision. The United States and Florida Surgeons General have declared vaping to be an epidemic. As the Attorney General and a mother, I will continue to advocate for legislation and in our courts to protect Florida’s children," Florida Attorney General Ashley Moody wrote in a statement.