The state of Florida requires more training hours for barbers (1,200) than it does for law enforcement (770). 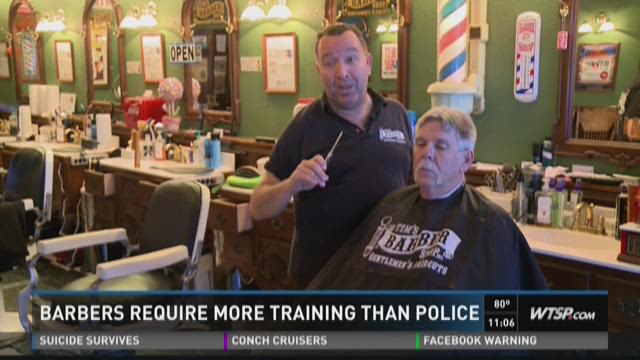 ST. PETERSBURG - You might be surprised to learn that the state of Florida requires more training hours for barbers than it does for law enforcement.

It's true: prospective barbers have to log 1,200 hours, while new officers need only 770.

"Wow, I thought it was a lot more,” said Tim Rinker, owner of Tim's Barber Shop, when told that the state requires more training for him to use his scissors than it does for a police officer to wear a badge.

“I was actually shocked to hear that it was that low of hours,” said Rinker. “I was under the impression that the police academy is probably like a one-year program, I did not know if was 700 hours, and a barber is 1200 hours. But like I say, it’s a serious job.”

Still, looking at minimum state requirements doesn’t necessarily tell the entire story when it comes to all of Florida’s law enforcement agencies. Many departments have more rigorous hiring qualifications that go beyond what's required by the state. In addition, some agencies such as the St. Petersburg Police Department put their officers through hundreds of hours of additional training after they get out of the academy.

“We are turning the page in law enforcement and getting away from the sitting at a table and me lecturing to you. You can only take that so far,” said Sgt. J.D. Lofton, who trains many of the St. Petersburg officers after they graduate from police academy.

“The guy that just goes through the academy and gets thrown on the street - that's a huge disservice, and I think that’s why you see a lot of places have better cops than others. It all boils down to training.”

Sgt. Lofton says the SPPD put new recruits through an additional eight-week, 320-hour post academy course followed by a minimum 14-20 weeks of field training before they're ever on their own. But that’s going above and beyond; many smaller departments don't have the money to do it with their officers.

“[If] they hired someone that was state certified, went through the academy, gave them a uniform and put them on the street, that person is nowhere near ready to actually go out and handle calls,” said Sgt. Lofton.

“It would nice if [the number of training hours] was higher and they include a little reality-based training."