Peeling back the layers of the Digital Divide in rural Florida

Community leaders, school districts, and local politicians are trying to help rural areas gain access to reliable and affordable internet. But, is it enough? 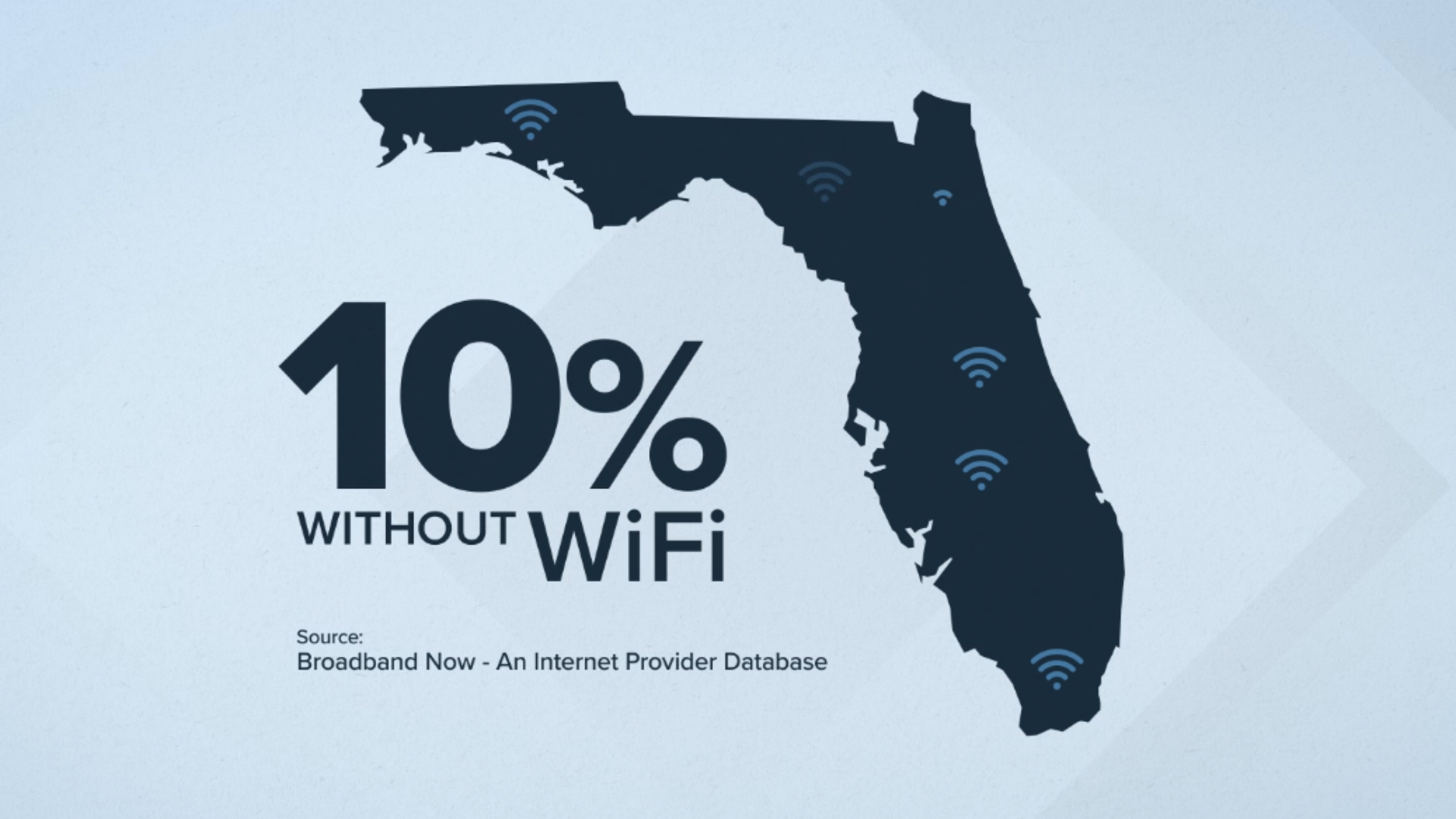 WIMAUMA, Fla. — There’s no doubt about it, the Internet is a tool that most people around the world depend on for their daily lives.

From applying to jobs to paying bills, and even setting an appointment at the beauty salon or doctor’s office, people have become dependent on the Internet.

So, when the coronavirus pandemic caused everyone to go on a global lockdown, people all over the world, from students to the working class, packed up their computers and headed home to where they logged in and carried on with their work and studies.

The transition was easy for most people living in urban areas because they had access to reliable internet service. Apartments and houses in metropolitan cities are usually hardwired and internet ready. And, the only thing left to do is to call the internet provider in the area and a modem will be delivered within a couple of days.

The state of Florida currently ranks at the top of the list of having reliable broadband service. However, 10 percent of Florida households do not have access to reliable internet service, according to the internet provider database, BroadbandNow.

“The problem is really in rural communities,” said Vittorio Nastasi, a policy analyst at Reason Foundation and co-author of the James Madison Institute research report, Rural Broadband Access in Florida.

“It's really a challenge of getting access to what is referred to as the ‘last mile,’ which are the communities that don't have the sort of population densities, or sometimes the economic means to really attract internet providers there,” Nastasi said. “It can be very expensive and very challenging to actually get the infrastructure to those last couple of communities.”

The cost of accessing high-speed internet in rural Florida

For some people living in rural communities, connecting to high-speed internet can cost thousands of dollars. Melissa Maurello, who lives in the rural community of Lithia, said the internet provider in her area quoted an astronomical price to run a line from the street to her home.

Maurello, who is a parent and teacher in the Hillsborough County Public School system, said dial-up is still available in her rural community but it’s not an ideal solution.

“For the items that teachers are sending out to students, dial-up won't work. You can't play a video. You can't zoom on dial-up," she said.

Instead of dial-up, Melissa opted to connect to the internet through the hot-spot on her mobile device.

“If for some reason that didn't work, we would go sit in the Ace Hardware parking lot in the car and do our work, and I would communicate with students,” she said.

“If you want reliable internet service, you're going to pay for it. And, a lot of people out here, we don't have a lot of money,” Dow said. “If you even want to try to get good service you have to put up at least a 50- to 100-foot pole, which is not cheap, to mount your satellite on to. And that doesn't guarantee it's going to work.”

For Dow, and many families like hers living in rural Florida, every month she is forced to make a financial decision one which bill she’s going to pay.

“Do I pay my student loans, or do I pay the Internet that we need for the kids to go to school?” she said.

How the federal government is handling the digital divide

Even before COVID-19, people living in rural America have been sounding the alarm for reliable and affordable internet service. In Florida, government officials are tasked with filling the void.

“We've known in Florida for a long time, that there is a digital divide when it comes to both families who are low income and then also our families in the rural area,” Rep. Fentrice Driskell (D- Hillsborough) said.

During Florida’s last legislative session, which ended on March 19, 2020, the Broadband Internet Service Bill was passed in the Senate. The bill will allow up to $5 million in annual spending from Florida Turnpike to go toward developing broadband infrastructure.

In addition, the CARES Act made $100 million in funding available to try to address the digital divide in rural areas.

“It's my understanding that Hillsborough County is using some of that money in order to try to assist with providing access to broadband in the wake of COVID,” Driskell said.

In July, the U.S. House also passed the Moving America Forward Act. The Act would authorize federal funding to increase broadband internet service to the underserved living in rural areas. And, it would also try to help make internet access more affordable in rural areas.

In an email to 10 Tampa Bay, Hillsborough County Public Schools said the district is aware of the digital divide and its leaders are working “diligently to reach families who do not have access to the internet.”

When schools closed during at the beginning of the coronavirus pandemic, the district did the following:

And, to connect with migrant families living throughout the rural communities in Hillsborough, the district leaned on a team of migrant advocates who delivered paper packets, Wi-Fi hot-spots and computers to students.

The district plans to continue these efforts throughout the 2020-2021 school year.

One solution to the Digital Divide

Over in the rural migrant farming community of Wimauma, Liz Gutierrez rolled up her sleeves to bridge the gap of the digital divide. It’s a project she launched well before the coronavirus pandemic took center stage.

“A year and a half ago, or more, we started working on how we can be part of the solution,” said Gutierrez, who made it her goal to answer one pressing question: “How do we solve this dilemma of access?”

“The Waldo Emerson quote on our walls at our Wimauma Opportunity Center that says ‘Once you make a decision, the universe conspires to make it happen.’ This is an example of that," she said.

The first phase started on State Road 674 near the downtown area. People can access the internet around the clock for free.

On July 14, 2020, the project kicked off its second phase where more than 450 families from the La Estancia, Groves and Newmauma communities, can now access the internet for free.

In addition, Wimauma Connects also partnered with the school district. One of its antennas is attached to Reddick Elementary School.

“That (antenna) is allowing folks to have access to that service,” Gutierrez said.

As she continues her mission to solve the digital divide in Wimauma, Gutierrez said the next goal is to train women and their families on how to use the Internet.

“Not just to browse, but also teach them how to use it for educational purposes. From how to apply for jobs to paying bills or even buying a plane ticket,” she said. “This is a platform that we are all having to use and a whole population is left out. And so we're trying to do our part to solve that part of the problem.”

RELATED: For parents who rely on school for more than education, COVID-19 presents painful challenges

RELATED: Millions of Americans don't have internet, now they need it to go back to school