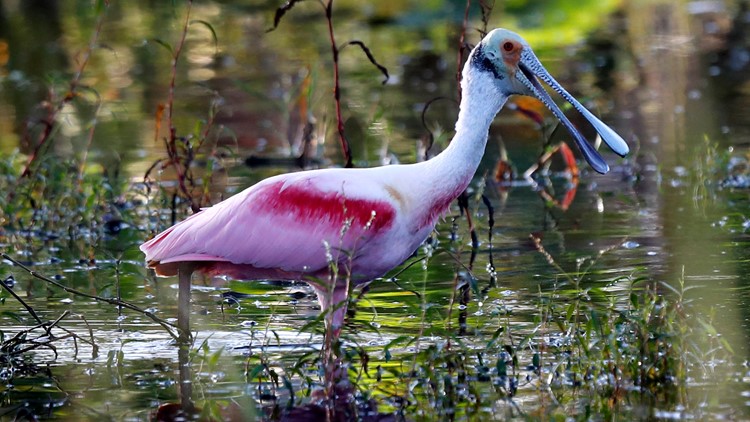 Photo by: AP
In this Tuesday, Oct. 29, 2019, photo, a roseate spoonbill searches or food in a shallow wetland near Fort Myers, Fla. (AP Photo/Robert F. Bukaty)

Here are 10 inventions that Florida can take credit for

ST. PETERSBURG, Fla. — Sure, the now-proverbial Florida man can always be counted on for a good laugh, but Floridians are responsible for creating a lot more than wacky headlines.

Here are 10 noteworthy inventions that came straight out of the Sunshine State.

Well, this one almost seems obvious. Florida sees its fair share of rain, but the sun can make a northerner melt on a hot summer day. And the ever-present threat of skin cancer is certainly no joke.

In 1944, an airman and pharmacist named Benjamin Green spread red veterinary petrolatum on his skin to protect himself from the sun’s rays. According to the New York Times, he mixed it with cocoa butter and coconut oil after the war – and Coppertone suntan cream was born.

The famous Coppertone girl didn’t make her debut until 1956.

Ok, your skin is safe, but any Floridian will tell you a few minutes working outside in the humid heat can leave you feeling like a prize fighter after 12 punishing rounds.

Athletes take an ever bigger beating, so University of Florida assistant football coach Dwayne Douglas asked some college researchers in 1965 to find a solution. According to UF, kidney disease specialist Robert Cade determined players were sweating out their strength and endurance – and electrolytes were the key.

Hydration is great, but no cold drink can help you sleep if your bedroom gets hotter than a locker room sauna at night.

But Gorrie never managed to capitalize on his invention. According to Smithsonian Magazine, northern ice-makers who made money shipping ice to the south stood in his way.

Do you know what’s great after an afternoon nap in a nice climate-controlled room? A refreshing piece of pie, of course! Ok, it’s not for everyone, but there’s no denying Key Lime Pie’s delicious Florida roots.

In fact, CBS News even entertained a claim that the sweet treat was made in New York City – but the eccentric people of Key West simply won’t stand for it. According to legend, Florida fisherman first created the pie in the late 1800s and sold them from the backs of their boats.

Speaking of splitting credit, there are few inventions more impactful than the one that toppled the lantern in light’s never-ending battle against darkness.

Thomas Edison made the first reliable incandescent lightbulb in 1879 and helped to literally flip the switch on America’s industrial revolution. While he spent most of his life in New Jersey, the famed inventor spent winters in Fort Myers alongside his good friend Henry Ford – so Florida clearly has a legitimate claim to some of the credit.

Thomas Alva Edison sits at his desk in the family living room at the Glenmont mansion in Llewellyn Park, West Orange, N.J. in this undated photo. (AP Photo)
AP

Don’t agree with Florida taking credit for the light bulb? Have a cookie!

Entrepreneur Wally Amos – the founder of Famous Amos Cookies – was born in Tallahassee. Sure, Biography explains he wound up in New York and moved to Los Angeles years before opening up shop in 1975, but Mr. Amos will always be a son of the Sunshine State.

Wally Amos of Kailua, Hawaii, in the doorway of his store with a hot batch of cookies, Tuesday, June 12, 2007 in Kailua, Hawaii. Amos, who created the Famous Amos cookie empire three decades ago and eventually lost ownership of the company _ as well as the rights to use the catchy name _ is now running a modest cookie shop in Hawaii. (AP Photo/Lucy Pemoni)
ASSOCIATED PRESS

Pro tip: Don’t wash down a mouthful of cookies with a glass of orange juice.

Just about everything orange-related comes from a state known all around the world for its top-notch citrus, so it shouldn’t be surprising that concentrated orange juice was created in Florida.

According to the New York Times, it was the brainchild of C.D. Atkins – and his invention may have helped the U.S. win World War II.

Yes, that’s probably a slight exaggeration, but the New York Times reported Atkins was tasked with improving the quality of processed orange juice to provide a better alternative for American troops serving overseas.

Screwdriver, anyone? The unofficial right of passage for millions of hard-partying American college students dates all the way back to the late 1930s. TIME Magazine credits Colgate University swim coach Sam Ingram, who brought his team to Fort Lauderdale to train at the old Casino Pool.

Apparently, the practice turned into a collegiate competition – then transformed into an annual pilgrimage. TIME highlighted the drunken debauchery in a 1959 article titled “Beer & the Beach.”

You can’t discuss unrefined fun without bringing up another one of Florida’s ubiquitous creations.

Hooters' take on a bar and grill concept has become a staple in beach towns all around the world – no matter what you think of the culture. The first restaurant in the famous chain opened its doors in 1983 in sunny Clearwater, Fla.

Admittedly, this may be a bit of a stretch for the invention category, but anyone who has chowed down on a Publix sub will understand why the one-of-a-kind sandwich made this list.

When Pub subs – as they’re called by those in the know – go on sale, the announcement instantly goes viral and lines at the deli start stretching into the bakery.

Publix was founded by George W. Jenkins, who worked as a stock clerk in the 1920s at a Piggly Wiggly grocery store in Tampa, Fla. He opened the first Publix in 1930 and opened a second store five years later.

The company has continued to expand ever since. It’s corporate headquarters is based in Lakeland, Fla.

RELATED: The top 10 checked baggage tips everyone should know