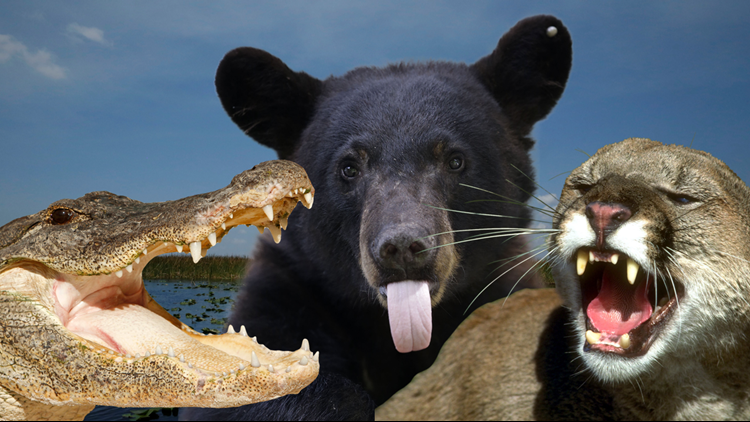 These are Florida’s most dangerous animals

And no, it’s not just the infamous ‘Florida man’ you need to worry about. The Sunshine State is crawling with countless creatures that can quickly turn this paradise playground into a Hollywood horror show.

The Department of Agriculture says there are several different kinds that can kill you.

Let’s start with the ‘widows’.

You’ve probably heard of the Black Widow – but she has a couple cousins. The Red Widow and Brown Widow pack a powerful punch too. Thankfully, they’re really skittish and only bite in self-defense. They like to hide in dark, dry places – so be careful when you’re lifting the lid on a barbecue grill.

Recluse spiders are no joke either, and the Chilean variety has been spotted in Polk County.

A Brown Widow spider, displaying the famous red hour glass marking under her abdomen, guards her egg sacs near Archer, Fla., Sept. 3, 2004. Though her bite is considered dangerous, the Brown Widow is shy and seldom bites unless provoked or her eggs threatened. This relative of the Black Widow makes its home in dark corners, under furniture, and abandoned containers such as old cans or unused pvc pipe. (AP Photo/Phil Sandlin)
ASSOCIATED PRESS

So, how about snakes? There are plenty of dangerous species slithering around Florida.

The USDA says Coral Snakes, Water Moccasins and Eastern Diamondback Rattlesnakes all feel right at home among the snowbirds. Thankfully, their venom is rarely fatal to humans, but a bite from one of these bad boys will land you in a world of hurt – so it’s best to keep your distance.

If you’re venturing off the beaten path, the experts say it’s best stay away from fallen logs: That’s their favorite hangout.

Venomous snakes aren’t the only ones to watch out for though.

Burmese Pythons are literally choking out other species all over the Everglades. They’re HUGE – and they could easily snatch a dog or small child.

Thankfully, there are no reports of any people becoming their prey.

This Eastern Coral snake is a distant relative to the cobra and is highly venomous. This coral snake was seen near Archer, Fla. on Friday, Oct. 5, 2007, where it usually lives under rocks and logs in moist areas and in pine flatlands. The coral snake is sometime confused with the harmless Scarlet King Snake. (AP Photo/Phil Sandlin)
ASSOCIATED PRESS

According to the conservation group Defenders of Wildlife, about 1.25 million alligators call the state home.

They’re dangerous on land, simply lethal in the water – and the number of human encounters is on the rise because their natural habitat has been shrinking for decades.

The American Crocodile is shier, but they’re also known to be more aggressive. With only about 1,000 living in the wild, you would have to be pretty lucky to spot one.

An American alligator is shown at Everglades Alligator Farm in the Everglades, Homestead, Fla., Tuesday, April 27, 2010. The farm is home to more than 2,000 alligators of all sizes. (AP Photo/Alan Diaz)
ASSOCIATED PRESS

Millions of tourists take their dream vacations along Florida’s gorgeous coastlines – but they’re not alone when they’re splashing in the surf.

Bull Sharks lurk in both the Atlantic Ocean and the Gulf of Mexico, and these apex predators aren’t picky eaters. Scientists have found everything from sea turtles to dolphins in their stomachs.

Surfers consider them to be among the most aggressive sharks, and the Florida Museum says they account for the third largest number of attacks worldwide.

However, big sharks with big teeth aren’t the only fish in the sea.

Atlantic Needlefish are found in many of Florida’s natural springs. They’re only about two feet long, but they can be deadly.

While attacks on humans are rare, if you catch one on a bad day, you could end up getting impaled.

Box jellyfish are tiny – and translucent. They love the Gulf of Mexico’s warm waters, and their sting can easily bring you to your knees – or worse.

Scientists say as ocean temperatures continue to rise, we’ll keep ‘seeing’ even more of them along Florida’s coast.

Let’s dry off now – and get into a little trouble on land.

Say hello to the wild boar.

This is no loveable potbelly pig. This is a mean, nasty and aggressive species that runs hog wild across all 67 Florida counties.

They’re the great, great, great, great grandchildren of pigs brought to the state by Spanish explorer Hernando DeSoto. Hunters say, with their unpredictable behavior and razor-sharp tusks, they can be more dangerous than bears – so beware.

FILE - In this April 13, 2017, file photo, a wild boar walks in a swamp, in Slidell, La. Feral hogs are believed to cause $76 million or more in damage across the state every year, and authorities say hunters help spread them by taking groups to more convenient hunting spots. Louisiana's Department of Wildlife and Fisheries is proposing a new rule to let its agents stop people who are hauling feral hogs to make sure they're authorized by the Department of Agriculture and Forestry. (AP Photo/Rebecca Santana, File)
ASSOCIATED PRESS

Speaking of bears –Florida has its own subspecies.

The Florida Black Bear is not aggressive, but it is defensive. If you come across a cuddly little cub – turn around and walk away. Its mother is probably nearby, and she will easily rip you to shreds.

With more than 4,000 of them in the wild, Florida Fish and Wildlife considers the Florida Black Bear a conservation success story.

It’s a much different story for the Florida panther.

Big Cat Rescue says only about 200 of them are left. They’re most active at dusk and dawn – and love to creep up and pounce on their prey.

The truth is, they want to stay as far away from people as possible – but with a mouth full of very sharp teeth and a top speed of 35-miles per hour, it’s a good idea not to go looking for one.

This fat, fist-sized amphibian is a serious threat to your pets. It releases a potentially-lethal toxin that can kill a dog or cat, so watch out for what Fido is licking in your backyard.

In this undated photo provided by the University of Florida, a bufo marinus, orBufo toad, sits on grass. An exotic amphibian that appears in the Tampa area and parts of southern Florida in the fall, it can kill small animals with its secretions. (AP Photo/University of Florida, HO)
TAMPA TRIBUNE

And finally -- a painful pest that can easily turn your weekend picnic into a pity party. Florida is infamous for fire ants!

If you see, what looks like, a mound of sand in the grass – step somewhere else. A colony can be home to 250,000 ants, and each one is willing to fight to the death to protect their egg-laying queen.