Tucked away off Gandy Boulevard in St. Petersburg, Weedon Island is home to evidence of the Tampa Bay area’s past. 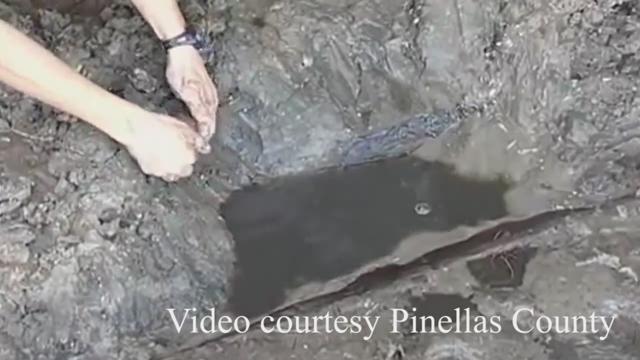 Tucked away off Gandy Boulevard in St. Petersburg, Weedon Island is home to evidence of the Tampa Bay area’s past.

“Weedon Island Preserve's rich human history began with prehistoric peoples who thrived on the abundant fish, shellfish, plants, and mammals of the wetlands, islands and estuaries of Tampa Bay. These people evolved into the Weeden (alternate spelling) Island culture that lasted some 800 years,” county officials explain.

People lived along the Pinellas County coastline up until the Spanish came in the 1500s.

In the 1920s researchers from the Smithsonian excavated the area, focusing on a burial mound. They discovered pottery that can be traced throughout the Southeast, from southwestern Georgia and Alabama to the Weedon Island Preserve, said Dr. Robert Austin, a member of the Alliance for Weedon Island Archaeological Research (AWAIRE) board.

Researchers are still trying to answer questions about who these people were -- and what become of them. “We wanted to see more work done here,” Austin said.

AWAIRE formed in 2008 to facilitate that effort. Very little research took place in the years after the Smithsonian project. During the 1960s and 70s, before Weedon became a preserve and was placed on the National Register of Historic Places, people dug up pits and took artifacts, Austin explained.

“I think archaeology and anthropology in general gives you a perspective on not just the past but just other cultures and an appreciation for other cultures, an appreciation for people who don’t live the same way we do or did,” Austin said. “Hopefully we can learn stuff from the past that will help us address similar problems today, one of which obviously is changing climate, sea level rise because people in the past had to deal with those problems, as well.”

“You get to see how people have lived over a long period of time, how they’ve adapted to not only the natural environment but to each other, other social groups, how the interact, how they deal with problems, and surprisingly a lot of those problems are the same ones we have today so it gives you a historical perspective on all that.”

Researchers want to provide a lens into the everyday lives of the people who lived on Weedon Island. “Archeology provides you with a historical context about how people have lived over a really long period of time,” Austin said.

AWAIRE board member and University of South Florida anthropology professor Dr. John Arthur brings students to Weedon to conduct research. “This is the most densely populated county in Florida, and we have Weedon Island that is really a jewel,” he said. “There’s a lot of questions that we still have to address. Archeology takes a lot of time. It takes a lot of labor,” Arthur said.

In 2011 archaeologists excavated an ancient canoe from the Weedon shoreline. The nearly 40-foot canoe is the longest dugout thus far in the State of Florida. “It was a very substantial find, one of the very first or maybe a very rare saltwater marine canoe,” AWAIRE board secretary Phyllis Kolianos said. “It really gave us new perspective.”

Most of the canoes previously found had been located in lakes or rivers – not open water like Tampa Bay.

Radiocarbon dating revealed the canoe to be from around AD 890. “The makers of the canoe are considered to belong to the Manasota culture, a prehistoric Native American people who hunted and fished the bay, leaving shell mounds along the coast,” researchers write.

With many questions left to be answered, AWAIRE hopes to continue moving forward to uncover the past. “We don’t know why people left the Weedon Island site. That’s one of the questions that we’re trying to address,” Kolianos said.

Florida is rich with evidence of human history, in large part because of the water, which aided transportation, and the climate. There are historical sites dating back 13,000 years. People set up their homes along rivers, lakes and Pinellas County’s coastline.

“We want to try to preserve in the young the importance of our cultural heritage in Florida,” Arthur said.