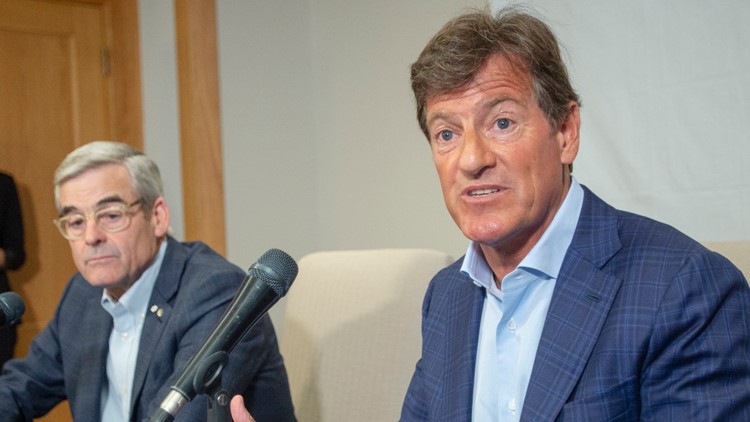 Photo by: AP
Private equity mogul Stephen Bronfman (right) and Pierre Boivin (left) speak to the media about the prospect of Major League Baseball returning to Montreal on Wednesday, June 26, 2019.

Montreal businessman on Rays' future: 'It's a full-time team played in 2 places'

Bronfman’s investment company, Claridge, and development company Devimco are teaming up to try to bring Major League Baseball back to Montreal.

"We really have a real chance to have a team in Montreal today,” Bronfman said.

The Rays’ lease runs through the 2027 season at Tropicana Field. Under the team’s current agreement, the Rays can’t pursue hosting home games outside of St. Petersburg during that time period.

St. Petersburg Mayor Rick Kriseman said Tuesday the city would “not participate in the funding of a new stadium for a part-time team.”

The Rays would have to reach a memorandum of understanding with the city of St. Petersburg before they could negotiate playing home games elsewhere, in this case between the Tampa Bay area and Montreal.

The Montreal Expos left Canada after the 2004 season when the franchise moved to Washington, D.C.

Bronfman and Boivin have gotten MLB’s approval to pursue the two-city plan while they wait for St. Petersburg.

"We've got an opportunity to explore and study this sister-city concept,” Bronfman said. “Hats off to MLB for their innovative thinking."

Bronfman called the split-city concept "groundbreaking,” comparing it to massive sharing-economy companies like Airbnb and Uber.

A North American professional sports team – which includes MLB, the NFL, the NHL and the NBA – has never had a team evenly split its home games for an entire season.

Bronfman admitted to having conversations with Rays owner Stuart Sternberg. Bronfman said he didn't ask Sternberg to buy the team, but he did ask about relocating the Rays.

During Wednesday’s news conference, Bronfman and Boivin didn’t say how much an open-air stadium would cost or how it would be financed.

“We’re not going to start building a stadium without a definitive plan,” Boivin said.

Bronfman said it might make more fiscal sense to build an open-air stadium used for part of the year because the seats higher up in any stadium or arena don’t provide as much return on investment as the closer, more expensive seats. He also admitted inclement weather in both Tampa Bay and Montreal could lead to postponed games and doubleheaders.

A new open-air stadium in Montreal could also be used for concerts and football, according to Bronfman.

Bronfman said it wasn’t his call for how soon it could be until Montreal hosts MLB games again. He said it would take about three years to build a new stadium.

Bronfman said he would like for his 88-year-old father to see the first pitch if MLB returns to Montreal.

While Bronfman didn’t dismiss the possibility of playing at the Expos’ old home, Olympic Stadium, for the first few years, he said MLB prefers a new downtown stadium before bringing a team to Montreal.

Bronfman also acknowledged the necessity of getting the MLB Players’ Association on board with a split-city concept.

Sports agent Scott Boras told the Tampa Bay Times he didn’t think any player moving midseason was “workable.” Boras said he couldn’t envision the Players’ Association agreeing to the split season because he said it would affect players, their performance and their families.

Bronfman said while Boras was one key voice, it would be a “team effort” to get the Players’ Association to agree to a team hosting home games in two cities. It would take a “lot of lobbying and a lot of work,” Bronfman said.

Like Sternberg and Rays management suggested Tuesday, Bronfman said the team could have a higher player payroll by splitting the season between two cities.

"It's hard to fight against a behemoth [the New York Yankees]," Bronfman said.