After losing two seasons to injury, Rays pitcher Anthony Banda is ready for 2020. He explains his tattoos and how his son helped him through a dark time. 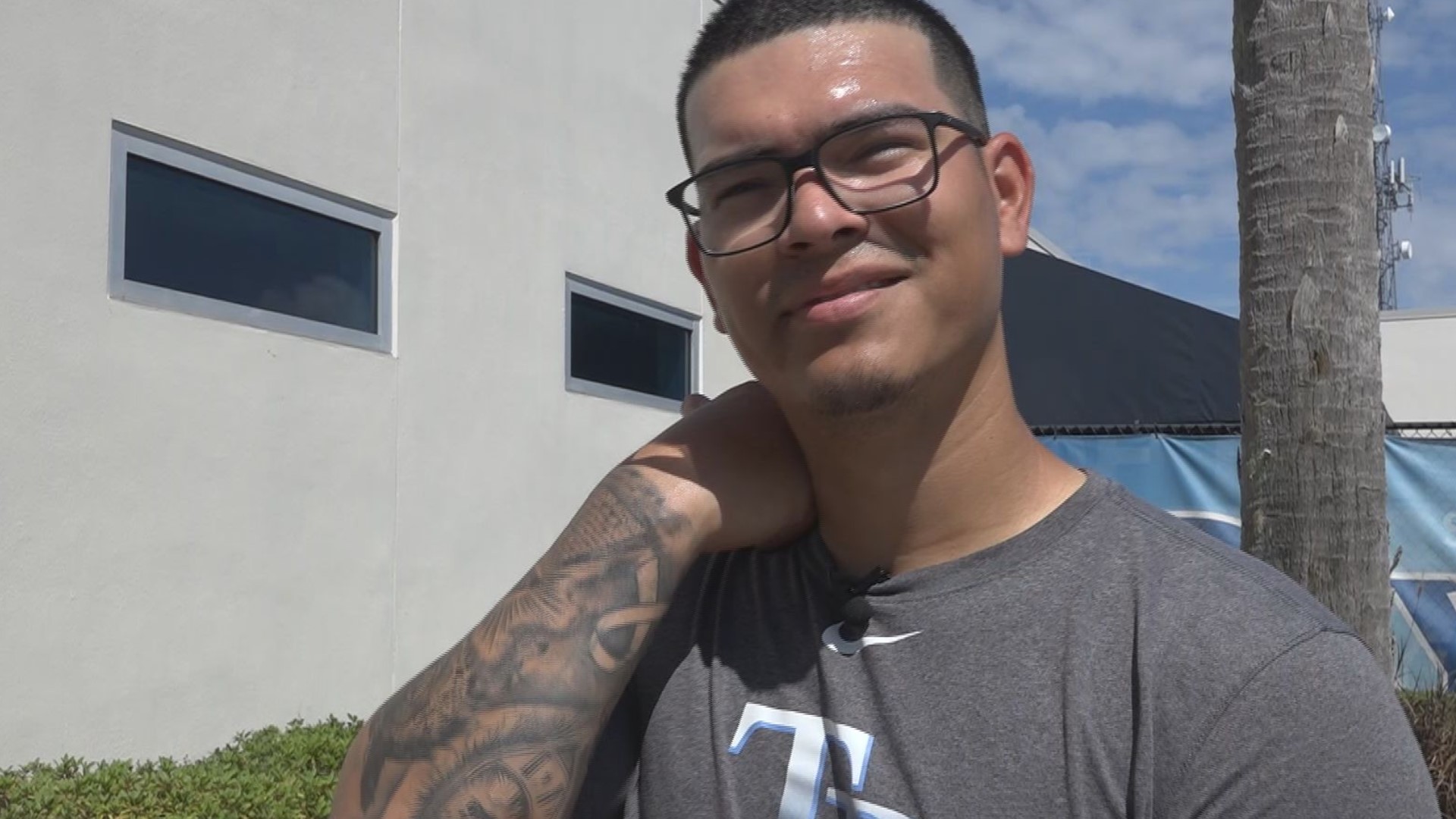 Anthony Banda doesn’t wear his emotions on his sleeve. He wears them underneath it.

“I’m always intrigued by people who have tattoos,” Banda said. “I like to know the story behind them.”

There are plenty of stories in Banda’s stamps.

On his upper right arm, there’s a cross set in clouds and rosary beads with the words “family, faith, love and loyalty.” Next to it are two tombstones with guardian angels bowing in prayer.

Below is an arrangement of flowers he got when he was 18 years old. Above it reads, “R.I.P. Zenaida and Adan Robledo. Please bless and look over me and our family.”

“This is for my grandparents,” Banda said “I was really, really close with them. They both passed due to cancer … The flowers are kinda a symbol as far as, you know, they’re always blooming in my heart.”

For him, the ink is art.

Like the clock on his left forearm showing the time his grandfather died.

Or the names of his four siblings on his left shoulder.

Or the chest piece of Jesus and his mother Mary.

“But,” Banda said, “Some I have just because they look cool.”

Like the owl and pyramid on his right forearm. Or the dove on his left.

Or the leg sleeve of anime he plans on getting.

But there’s one design that stands out from the rest.

Above his right elbow is an intricate drawing of a human eye. A young child leaps for joy inside the pupil.

“This is my favorite one,” Banda said. “This is supposed to represent me seeing my son grow through life.”

Banda’s son Ayden is 13 months old. The Rays pitcher calls him his “savior.”

“It really hit me when he smiled at me for the first time,” Banda said. “I’ll never forget it. I was sitting on the couch and he looked at me and smiled, and I was like ‘wow.’ It was a different feeling. I don’t know how to explain it.”

Ayden was born in December 2018, toward the end of Banda’s recovery from Tommy John surgery. Banda was in Arizona rehabbing from the torn ligament in his left elbow.

“It was tough,” he said. “The mental aspect is what’s the most challenging.”

The Rays acquired the promising lefty from the Arizona Diamondbacks in a three-team trade before the 2018 season. He made just three appearances that season before he was sidelined, then missed three-quarters of the 2019 season with the injury.

“It was very frustrating for me,” Banda said. “The main problem that beat up on me was, ‘Man, I just got to a new organization. They traded for me for a reason, and then this happens.’”

It’s easy for a pitcher to get lost in the shuffle, especially with the arsenal the Rays have in the bullpen.

Banda said at times he felt unimportant. The physical rehab wasn’t a challenge for him – he said the conditioning during spring training days is more demanding – it was the mental side that got to him.

Having just been traded, he was unfamiliar with Port Charlotte, so it was difficult to find activities that could distract him from recovery.

At one point, he considered walking away from the game.

Now halfway through spring training, Banda is feeling healthy and ready to compete for a spot on Tampa Bay’s Opening Day roster. He’s hitting the mid-90s and picked up a win Saturday against the Baltimore Orioles. In four spring appearances and 5.2 innings of work, he’s allowed five hits, two earned runs and one walk while striking out five.

He’s grateful to his son and girlfriend for pulling him through a dark time.

“I just think it was a blessing in disguise because one, I got to see [Ayden] for the first few months when he was born,” Banda said. “And two, it got me through a whole mental challenge.”

And that tattoo is more than skin-deep.

“Whenever he’s there, everything just disappears,” Banda said. “It’s just me and him, and I love it.”

RELATED: Rays' Jose Martinez gets into the coffee business: Call him 'Cafecito'