The Tampa Bay Rays say Tyler Zombro was taken to the hospital and is in stable condition. 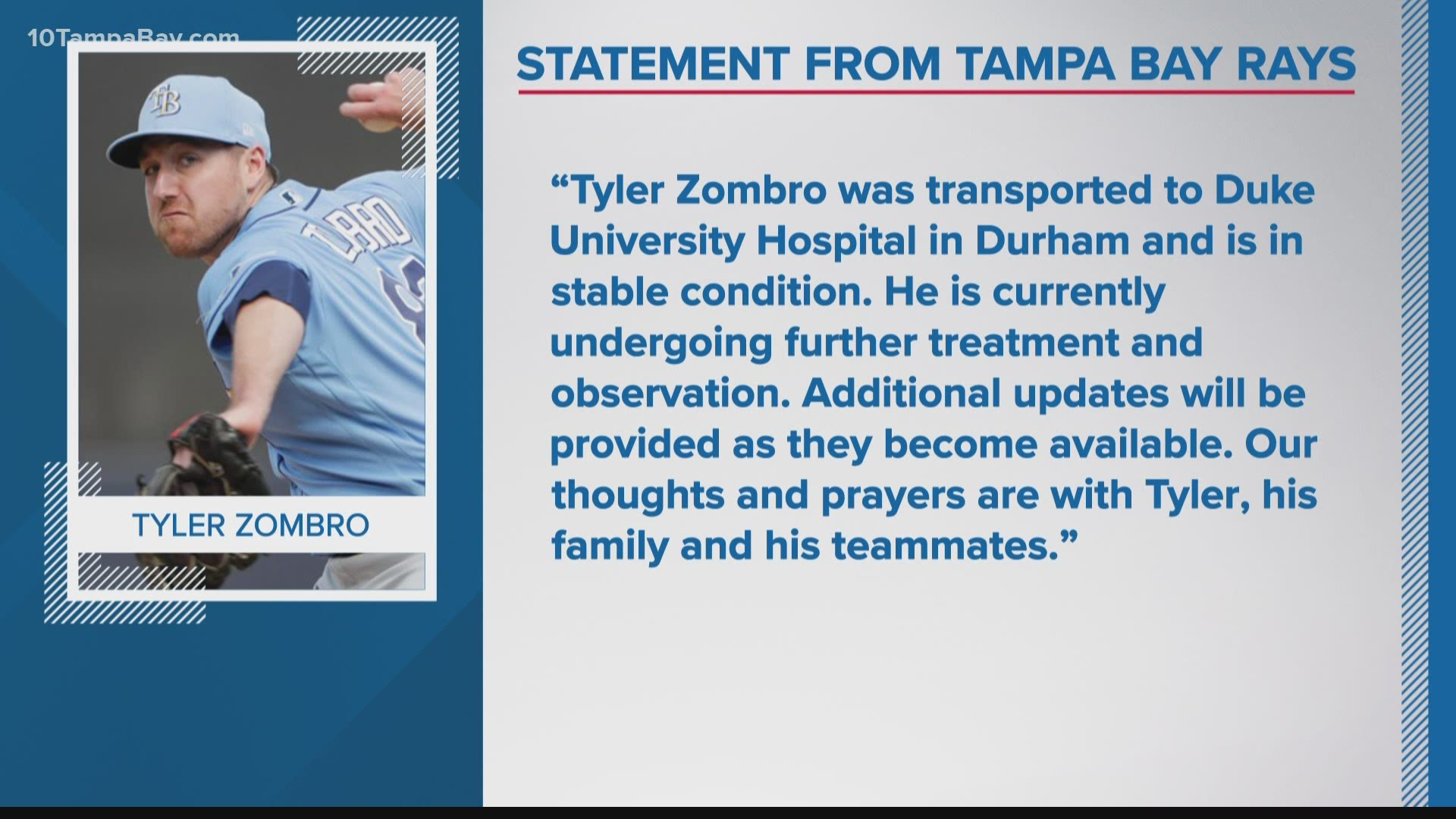 DURHAM, N.C. — Minor league pitcher Tyler Zombro was struck in the head by a line drive and began convulsing on the mound in a frightening moment that prompted Triple-A Durham to suspend its game.

Zombro, a right-hander in the Tampa Bay Rays organization, was struck by a sharp line drive hit by Norfolk’s Brett Cumberland in the eighth inning.

Zombro crumbled to the ground, lay motionless for a moment face down, then began to shake uncontrollably as teammates and a trainer rushed toward the mound.

Cumberland took a knee near first base while Zombro was tended to, and other players did the same, many of them praying. WRAL-TV reported that Zombro was taken off on a stretcher.

“As of this morning, Tyler remains under the care of the nurses and doctors at Duke University Hospital. The updates from overnight have been positive, and he remains in stable condition. We are overwhelmed by the support for Tyler and the wishes for his full and speedy recovery from fans and the baseball community alike. We will provide additional updates as he progresses.”

A prior statement from the Rays is below.

“Tyler Zombro was transported to Duke University Hospital in Durham and is in stable condition. He is currently undergoing further treatment and observation. Additional updates will be provided as they become available. Our thoughts and prayers are with Tyler, his family and his teammates.”

A statement from @RaysBaseball on the condition of @T_Zombro24: pic.twitter.com/iMi7ve9ZBi

Durham announced Friday morning that it would postpone the day's game against the Norfolk Tides in light of Zombro's injury.

Kevin Cash, when asked later in the day over a Zoom call, agreed with the decision.

"It's been a tough go for those guys," Cash said. "What they witnessed was very scary for a guy they care a lot about. Can totally understand that their mind is just not there right now. To postpone a game makes sense for those players."

Cash said he had talked to Bulls manager Brady Williams, who reported back that Zombro "is recovering well... as well as we could hope for."

"I'm sure the next 24 to 48 hours we'll want to keep hearing the good news," Cash said. "But right now, we feel very fortunate and lucky to be where Tyler is at and just continue to hope for the best for him."

Zombro had pitched in relief or as a closer in nine games for Durham this season. He was a non-roster invite to Rays spring training camp the last two years.