The 13-minute halftime show performance included his hit songs "Starboy," "The Hills," "Can't Feel My Face," and "I Feel It Coming." 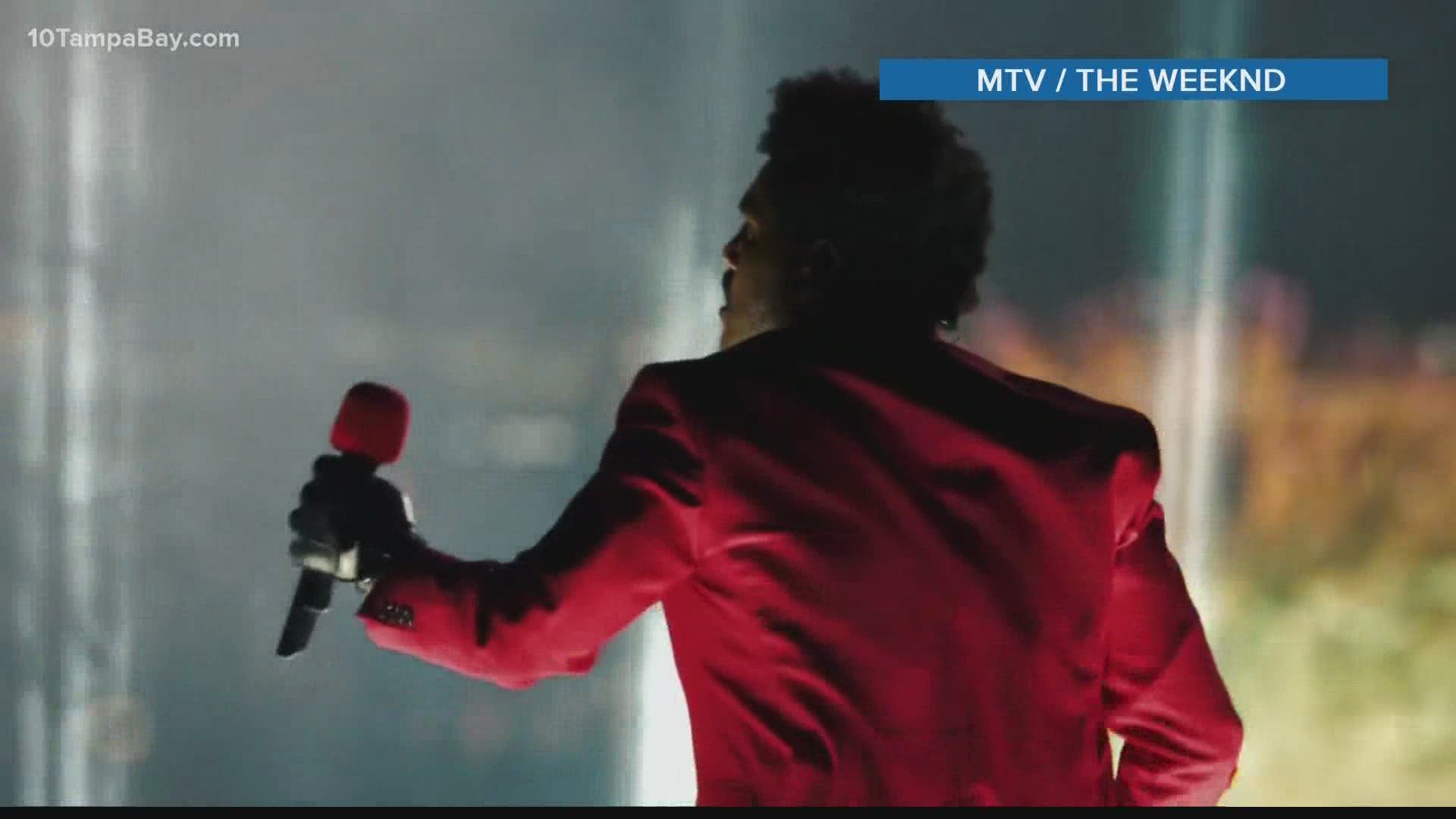 The Weeknd put $7 million of his own money into his Super Bowl halftime show performance to make sure it was just as he envisioned, and it definitely paid off. He rocked his first Super Bowl performance, filled with lights, mirrors, loads of fireworks and dozens of dancers.

The 13-minute performance included his hit songs "Starboy," "The Hills," "Can't Feel My Face," and "I Feel It Coming."

Instead of having fans surrounding the stage on the field due to the ongoing coronavirus pandemic, he performed at one end of the stadium near the jumbotron before making his way to the field where distanced dancers performed.

The Weeknd opened with a virtual reality intro featuring him in a car and a city skyline. He then appeared live in the stadium when he walked out from behind a giant wall made up of people dressed in white and wearing masks.

After performing "The Hills," he walked back in to the wall where he held a camera and passed it around a room filled with marquee lights and mirrors. Then, dozens of masked men dressed identically entered and bounced The Weeknd around.

He then proceeded to dance around a built city landscape before performing "Earned It" as violinists and dancers performed behind him.

1 / 21
Associated Press
The Weeknd performs during the halftime show of the NFL Super Bowl 55 football game between the Kansas City Chiefs and Tampa Bay Buccaneers, Sunday, Feb. 7, 2021, in Tampa, Fla.

Some noted similarities in his looks to Michael Jackson, noting his sequined red jacket and black gloves.

Fans on Twitter praised the Weeknd while others took note of some of the performance's more interesting moments.

Give us that phone give us the GAMES pic.twitter.com/184MNQpZzX

Ahead of his performance, the pop star, known for his graphic videos and performances, said he would make his halftime performance "PG." He promised to be “respectful to the viewers.”

His comments came after last year's Super Bowl performance with Jennifer Lopez and Shakira, which resulted in over 1,300 complaints from viewers toward the Federal Communications Commission, for "extreme booty shaking," "pole dancing" and "S&M outfits."

When asked for his favorite Super Bowl halftime show, The Weeknd cited Diana Ross' 1996 performance. She was lowered to the stage by a crane of sparklers, hundreds of dancers spelled out her name on the field, she made three costume changes and she left via helicopter.

“The show just makes me smile,” said The Weeknd.

The Weeknd broke though into mainstream with his smash hit “Can’t Feel My Face” that was featured on his second studio album, “Beauty Behind the Madness,” which topped the Billboard 200 in 2015 and won a Grammy. He’s had three other chart-topping albums including his recent offering “After Hours,” which was released in March.

Last year, The Weeknd’s hit single “Blinding Lights” became his fifth song to peak at No. 1 on the Billboard Hot 100 chart. He’s also won Grammys for his album “Starboy” and the song “Earned It (Fifty Shades of Grey).”

RELATED: 5 things to know about The Weeknd before his Super Bowl halftime show