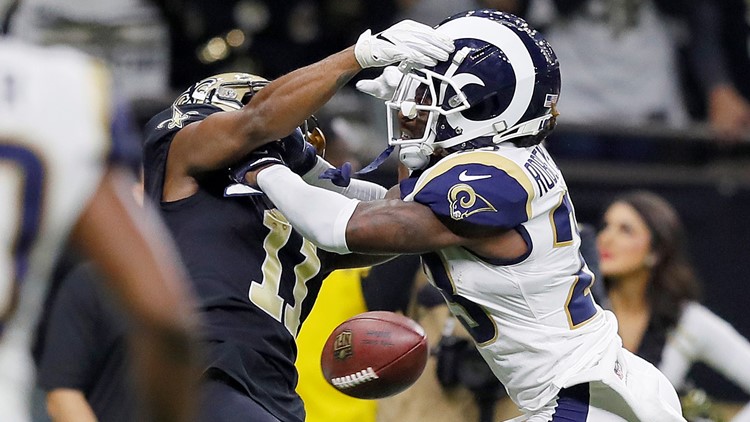 Photo by: Getty Images
Saints receiver Tommylee Lewis and Rams cornerback Nickell Robey-Coleman fight for a pass in the fourth quarter in the NFC Championship game on Jan. 20, 2019, at the Mercedes-Benz Superdome New Orleans.

What the heck happened? Understanding the craziness of the AFC, NFC championship games

The AFC and NFC championship games came down to the wire, and there’s plenty to break down.

By now, nearly every NFL fan has seen Rams cornerback Nickell Robey-Coleman’s hit on New Orleans Saints receiver Tommylee Lewis. The play happened with less than two minutes left in the fourth quarter with the game tied at 20. It should have been called a pass-interference penalty, but the flag never came.

Reporters asked Robey-Coleman about the play after the game. He admitted he should’ve been called for pass interference.

Reporters asked referee Bill Vinovich about the play too. According to an exchange with a NOLA.com reporter, Vinovich said it was a judgment call by the referees -- adding he hadn’t seen the play, and the timing of the game did not have an impact on the no-call.

The referees do not have the ability to look at a replay and then administer a penalty under current NFL rules. Some are calling for the NFL to adopt the Canadian Football League’s rules, where pass interference calls and non-calls are reversible by video review.

“It was simple, they blew the call,” Saints head coach Sean Payton told reporters after the game.

Screenshots posted to social media show the referees missed several other calls that would have gone against the Saints throughout the game too, including a delay-of-game penalty, two facemask penalties and an unnecessary roughness penalty.

Rams kicker Greg Zuerlein would go on to make a 48-yarder with less than 20 seconds left to tie the game at 23-23. It sent the game into overtime.

In overtime, Zuerlein made a game-winning 57-yard field goal.

The Chiefs tied it up, but opted to kick the game-tying field goal with 11 seconds left

Down 31-28, the Chiefs had 11 seconds left in the fourth quarter with 2nd down and 10. The Chiefs were at the New England 21 yard line and didn’t have any timeouts.

The Patriots could have forced a turnover had the Chiefs tried to score a game-winning touchdown on one more play before kicking the field goal. Who knows what the outcome would’ve been?

Kicker Harrison Butker made a 39-yard field goal to tie the game and send it into overtime.

Seven years ago, the NFL adopted its current playoff overtime rules. Here is a quick explanation of how it works.

Chiefs fans are livid quarterback Patrick Mahomes didn’t get a chance in overtime against the Patriots. Some feel the Patriots winning the coin toss in overtime decided the outcome of the AFC championship game.

Even if the NFL adopted college football’s overtime rules, eventually your team’s defense would need to get a stop to win the game.

Romo has one year left on his CBS contract, but it’s hard to imagine the network getting rid of him after he predicted several plays that New England ran before they happened. The former Dallas Cowboys quarterback likely earned himself a nice payday.

Several others pointed out that if Romo could predict what the Patriots were going to do, some of the Chiefs defenders should have been able to as well.

Tom Brady is the GOAT

Here are some stats in the aftermath of Sunday’s game:

This year's Super Bowl matchup in Atlanta between the Patriots and Rams is a showdown between the NFL's past and its future.

Led by 24-year-old quarterback Jared Goff, the Rams and their 21st-century offense will take on 41-year-old Tom Brady and the Patriots, who are in search of a record-tying sixth Super Bowl title.

Since the Saints lost in the NFC championship game: