Joel and Lindsey met as kids through their cancer treatment at St. Jude Children's Research Hospital. Decades later, they both returned to the hospital, reconnected and fell in love. So when it came time for the wedding, the choice of venue was easy. 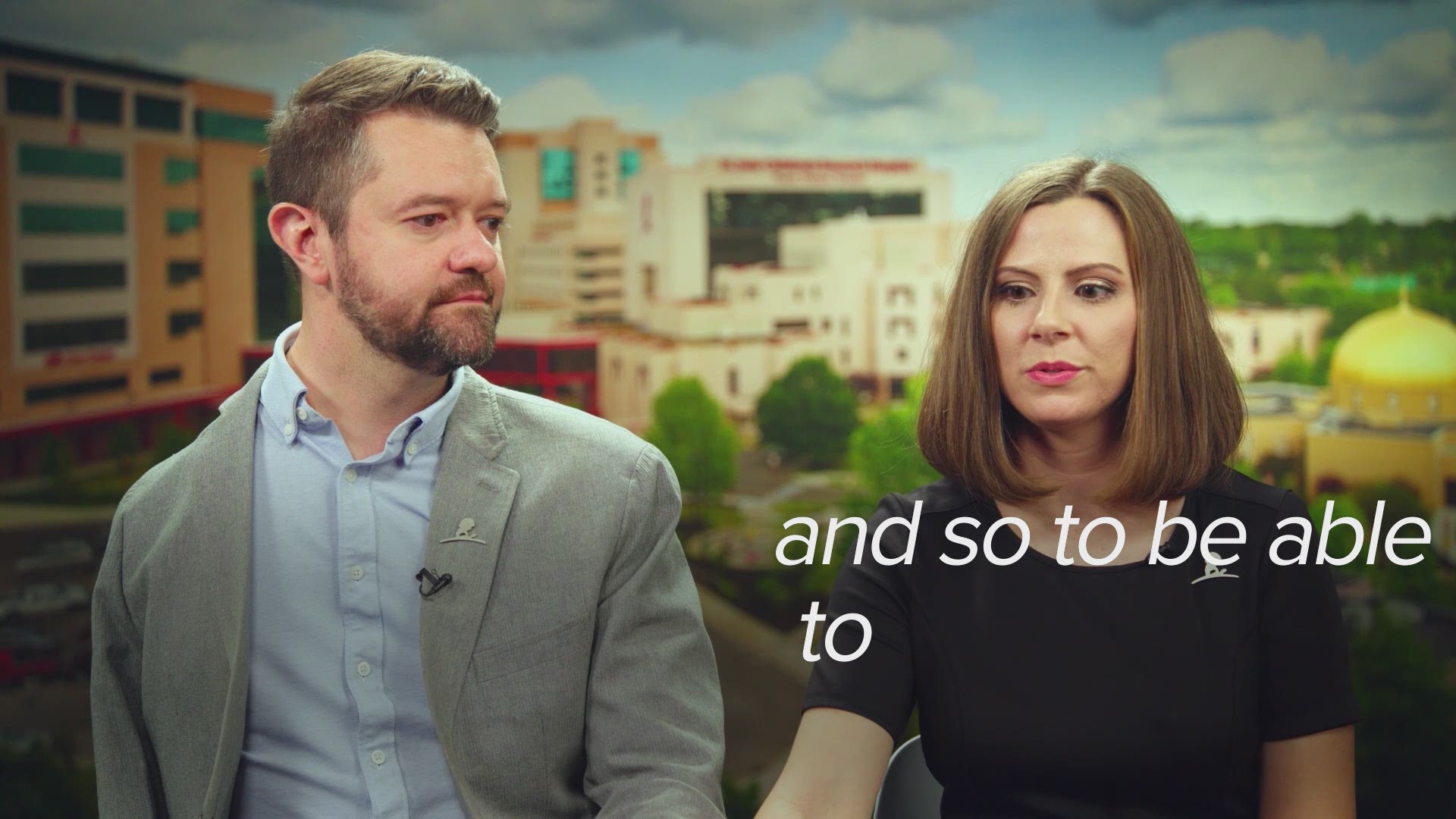 Signs of illnesses began when they were both kids. When he was 7 years old, Joel began to have difficulty moving his right arm, while Lindsey’s parents noticed she had significant loss of energy and bruised easily when she was 10. Their diagnoses were devastating: Joel had osteosarcoma, a form of bone cancer, and Lindsey had acute lymphoblastic leukemia.

Doctors recommended they both seek treatment at St. Jude Children’s Research Hospital in Memphis, Tenn. Parents never see a bill for their child’s care at the hospital. Lindsey’s family traveled from Missouri, while Joel came from across the state in Chattanooga.

But at St. Jude, they received life-saving procedures: Joel had his arm amputated and Lindsey underwent chemotherapy for three years.

They met at an event for the hospital when Joel was a shy 13-year-old and Lindsey was a jovial 12-year-old still in treatment.

“I was taken aback by her,” Joel said. Naturally, he did what every awkward 13-year-old boy would do.

Still, the affection was mutual.

“I admired him since I was a little girl,” Lindsey said. “He was such an incredible spirit and somebody who truly inspired me.”

It wasn’t easy, but their treatments were eventually successful. They both finished their time at St. Jude cancer-free and tried to pick up where their lives left off before illness.

Even as they grew older, however, both Joel and Lindsey felt deeply connected to the hospital that saved their lives. As adults, they both returned to work in fundraising at St. Jude. Joel worked on the creative media services team and Lindsey helped with a patient liaison team.

“It was great to have somebody here who was able to give back but also understands the challenges of a childhood cancer survivor,” Lindsey said.

At the hospital, they reconnected, but it took some time until they realized their feelings for one another were more than just that of a fond childhood friendship.

“It was a very slow progression of knowing each other so long,” Lindsey said. “I think we were the last ones to figure out that we were supposed to be together.”

Finally, Joel mustered the courage to invite Lindsey over for a movie, though his cinematic preference was questionable at best.

“I gave her a very romantic evening of watching the movie ‘Alien’ at my house, which you know is the great romantic comedy from the 1970s,” he said with a laugh.

It didn’t matter to Lindsey, though. At the end of the movie, when Joel blurted out “I love you,” she said it back.

“It was the best moment of my life up to that point,” Joel said.

A few years later, Joel took Lindsey and her kids Audrey, 12, and Jacob, 8, to Lindsey’s home state of Missouri. Her kids gave her a candy jar from the St. Jude event where they first met and the movie “Alien” before he dropped to his knee – a proposal nearly two decades in the making.

When it came time to plan the wedding, one arrangement came without any hesitation.

“The decision process to figure out where we would get married was kind of like when we said we loved each other,” Lindsey said.

That is to say, easy.

The hospital that meant so much to the couple was the obvious choice for the ceremony. The wedding took place at a chapel on the campus, and the officiant was a St. Jude chaplain who had known the two since their days as patients. Friends and family came together to celebrate a joyful moment that the couple weren’t always so sure they would get.

“The wedding was a magical day for us,” Lindsey said. “It was certainly a fairytale.”

Credit: Mike Brown
Lindsey Wilkerson and Joel Alsup are all smiles and laughter as they walk out of the Danny Thomas/ALSAC Pavilion at St. Jude Children's Research Hospital following their wedding. Photo: ALSAC photography

Today, they are enjoying married life as a family and continuing their passion for the mission of St. Jude. Joel recently celebrated 30 years cancer free with Lindsey beside him, a milestone that serves as proof of the importance of believing in better days ahead, even during the toughest of times.

“How many folks get to say that, that they married their best friend who has known them through the great moments of their life and the challenging ones too, and that’s what we have,” Lindsey said.