SpaceX capsule to splash down from space just west of Tampa

The capsule will bring back science experiments from the International Space Station. 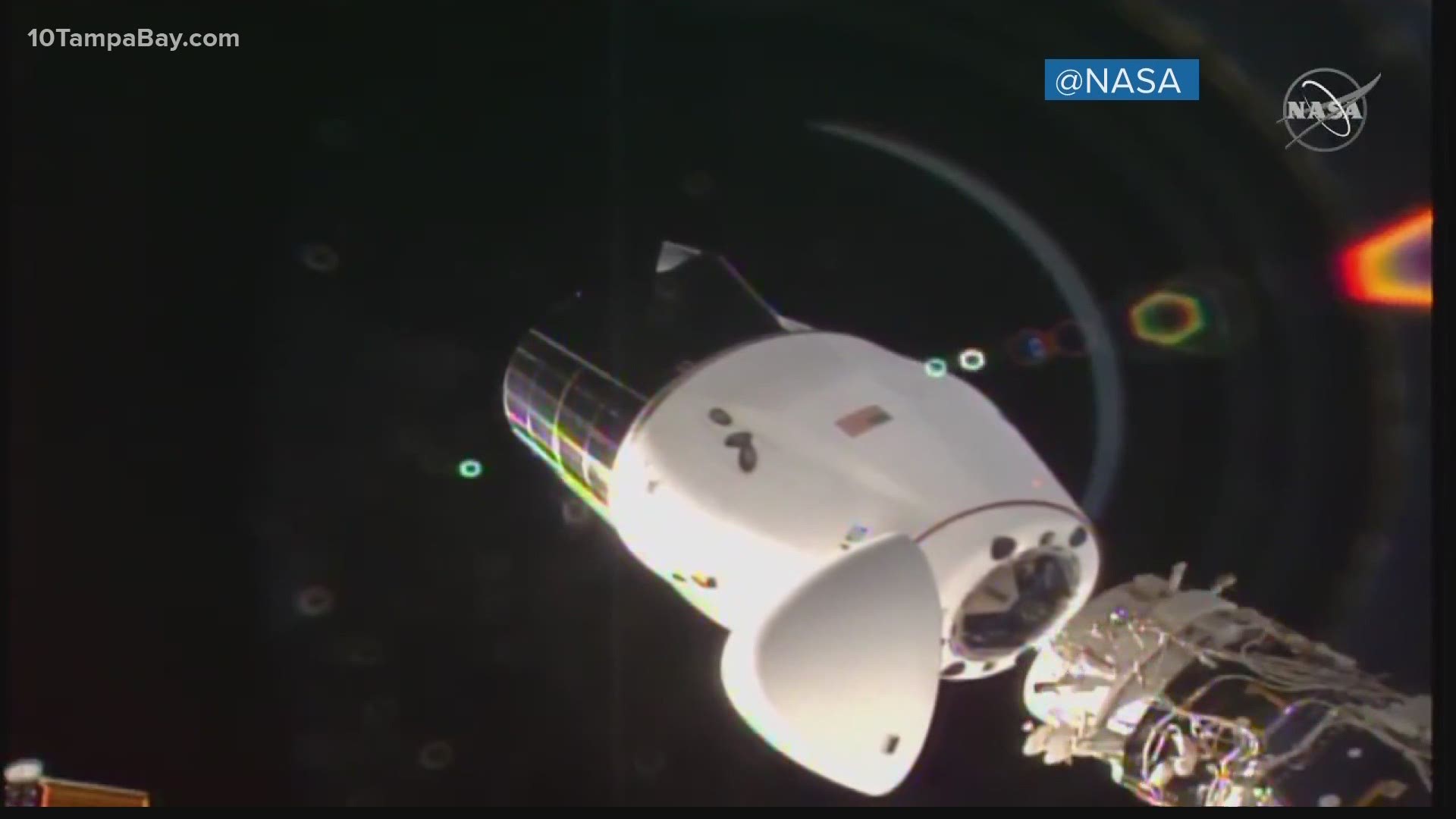 TAMPA, Fla. — The SpaceX cargo Dragon 2 spacecraft was expected to undock from the International Space Station (ISS) Monday morning at 10 a.m. and then splash down off the waters of Daytona Beach at 9 p.m. Monday. However, due to weather concerns at the splashdown site, the undocking and flight back to Earth were delayed until a future date.

The future date ended up being Tuesday morning. NASA says the undocking occurred at 9:05 a.m. with astronaut Victor Glover monitoring the event. It is the first undocking of a U.S. commercial cargo craft from the complex.

According to NASA, Dragon 2 fires its thrusters to move a safe distance from the space station. On Wednesday, Jan. 13, Dragon 2 will initiate a de-orbit burn to begin the re-entry sequence into Earth’s atmosphere.

🐉 The upgraded @SpaceX cargo Dragon successfully undocked from the @Space_Station at 9:05am ET & is on its way back to Earth for splashdown on Jan. 13, west of Tampa off the coast of Florida. @ISS_Research will be delivered to researchers at @NASAKennedy: https://t.co/Dqltf5ME8X pic.twitter.com/esYxtUmBfH

Dragon 2 is expected to splash down west of Tampa off the Pinellas County coast about 8:27 p.m. Wednesday. The splashdown will not be broadcast. NASA also tells 10 Tampa Bay that it's unlikely to be visible from the coastline. There's no lighting on the spacecraft and its de-orbit burn will actually take place over the Indian Ocean.

SpaceX recovery teams will be on standby for the parachute-assisted splashdown in the Gulf of Mexico. The SpaceX team will unload time-critical science specimens and put them on a helicopter for a flight to the Kennedy Space Center. The remaining cargo will be transported by truck, according to NASA.

The Cargo Dragon 2 is loaded with more than 4,400 pounds of important scientific cargo, including live mice, and the results of a variety of scientific experiments the crew performed in microgravity.

Tampa gets to be part of Florida space history, as this is the first undocking and splashdown of a Cargo Dragon spacecraft in Florida.

The previous recovery zones have been in the Pacific Ocean west of Baja California. But, by splashing down in Florida, SpaceX and NASA will be able to recover the spacecraft faster than before to return the experiments to scientists with minimal loss of the effects of microgravity.

NASA says this is the first time that science experiments will return from the ISS through NASA’s Kennedy Space Center in Florida since the retirement of the space shuttle.

It has two variants: Crew Dragon, a space capsule capable of ferrying up to seven astronauts, and Cargo Dragon. The spacecraft launches atop a Falcon 9 Block 5 rocket and returns to Earth via a parachute-assisted ocean splashdown.

Its first crewed flight occurred in May 2020 with astronauts Robert Behnken and Douglas Hurley.

SpaceX plans to reuse each Cargo Dragon capsule up to five times.